Manufacturing conditions across mainland China stabilised in March, according to the latest Caixin PMI data. The survey showed a slight increase in production after a record decline in February due to factory shutdowns and travel restrictions. However, a sustained fall in new business inflows suggests that further growth in output could be limited in the coming months, and largely confined to processing backlogs, as the coronavirus disease 2019 (COVID-19) pandemic hits worldwide demand. The headline Caixin China General Manufacturing PMI rose to 50.1 in March, up sharply from 40.3 in February, representing the largest monthly increase in the 16-year survey history. However, some caution needs to be applied in interpreting the PMI. The PMI measures the month-on-month change in business conditions, with a level of 50.0 representing the no change mark. The headline index therefore merely pointed to a stabilisation of operating conditions in the sector during March rather than a recovery. Coming on the heels of an unprecedented collapse in February, the marginal gain seen in March leaves the level of business activity remaining well below that seen in January.

Driving the headline index higher was the resumption of output growth, albeit only modest. Having plummeted in February, manufacturing production rose slightly in March as fewer companies reported factory closures and more manufacturers reportedly restarted work throughout the month. That said, the rate of growth in overall output was marginal, reflecting the fact that operating capacity has yet to return to full strength in many sectors. 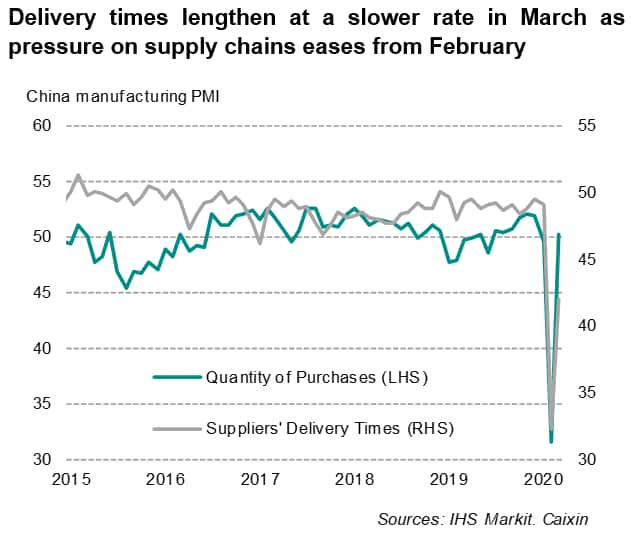 The recovery in output was led by large- and medium-sized manufacturers, but production of small firms fell further (though at a considerably slower rate than in February).

Firms optimistic that demand will revive

Business confidence remained among the highest for the past five years, as reflected by the Future Output Index, with the proportion of firms expecting higher output in a year's time exceeding those anticipating a decline. Optimists generally highlighted work resumptions as a key reason for higher confidence.

As such, firms are likely to be relying heavily on processing orders not yet fulfilled due to factory shutdowns and supply chains disruptions, plus capacity coming back on-line in the coming months as demand conditions continued to weaken in March.

Total new orders shrank for a second straight month at the end of the first quarter, albeit at a much slower pace compared to February. New export orders showed a similar trend. The increasingly strict measures to contain the COVID-19 virus around the world, such as more countries implementing lockdowns and travel restrictions, have hit global demand.

The gradual restoration of supply chains meanwhile led to an increased availability of input materials. This was reflected by a modest rise in purchasing activity.

Responses nevertheless continued to indicate that the COVID-19 outbreak adversely impact supply chains. While not as severe compared to February, delivery times continued to lengthen at a rate not usually seen since the global financial crisis. Anecdotal evidence suggested that delivery delays were linked to distributors not yet resuming to full capacity as well as an understaffed workforce. 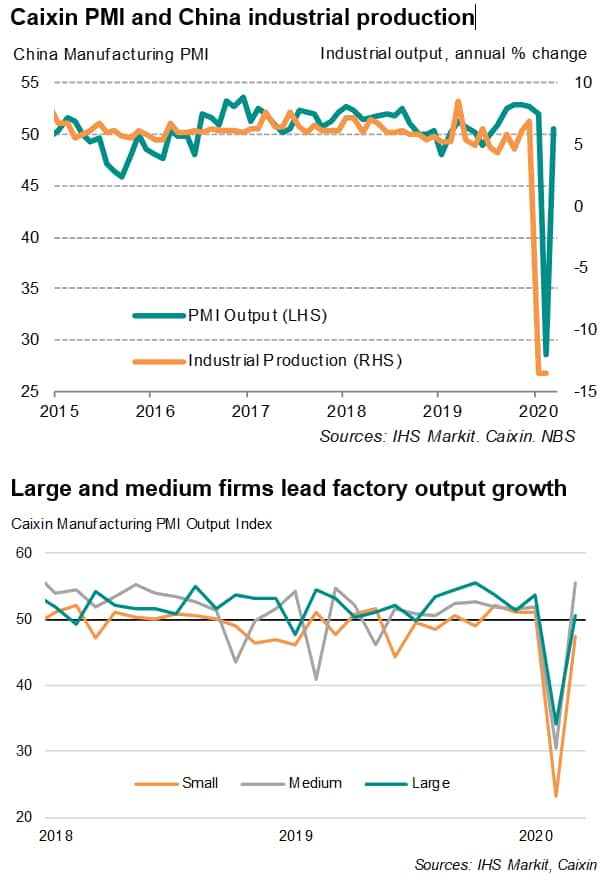 Chinese manufacturers reported a decline in input costs for the first time in seven months during March, as falling global prices for raw materials (such as base metals) and energy (particularly oil and coal) helped drive input prices lower. At the same time, prices charged for manufactured goods were reduced further in March, falling at the fastest rate for seven months. Firms generally commented on efforts to boost sales via price discounting.