Irish firms operating in sectors deemed to be most at risk1 from Brexit showed signs of stress throughout 2018, according to PMI data from IHS Markit.

With ten weeks to go until the UK is due to leave the EU and Theresa May's Brexit deal rejected by the UK parliament, uncertainty among Ireland's most vulnerable firms is likely to be heightened in the near-future. 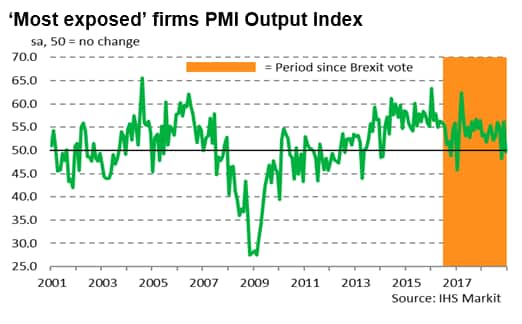 The outperformance of the 'least exposed' sectors compared to their peers in 'more exposed' industries was also evident with regards to inflows of new business. December saw the PMI New Orders Index for the 'most exposed' sectors drop 5.9 index points below that for the 'least exposed', a much greater divergence than the average of 3.8 index points seen since the start of 2001. A similar divergence was seen with the rates of job creation and business sentiment. 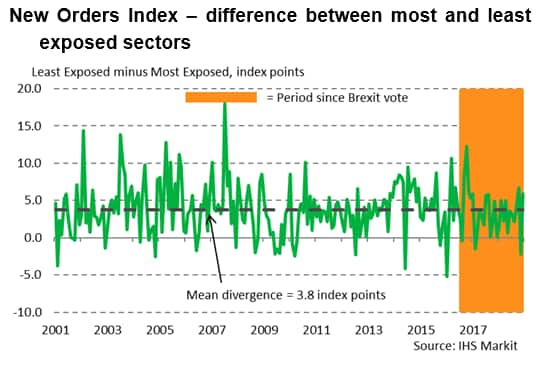 Although greater than normal, the recent underperformance of the 'most exposed' sectors has not been as great as the period immediately following the UK's 2016 referendum. This could be due to efforts by companies to prepare for Brexit, such as by reducing any reliance on UK business.

Also available are extensive Brexit help articles, a 'Be Prepared Grant', which offers 5,000 euros for companies to develop a Brexit support plan, and detailed market access guides for Irish companies looking to export goods and services.

Looking forward, companies in the 'most exposed' sectors have seen sentiment regarding output in the coming year dip markedly in recent months.

December saw the PMI Future Outlook Index sink to the lowest since the aftermath of the UK's referendum in July 2016. That said, Irish firms in general still expect that output will rise over the coming 12 months. 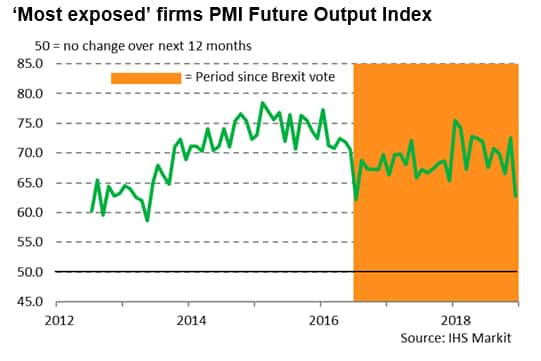 The increasing uncertainty over EU negotiations and the unwinding of often complex supply chains with the UK provide headwinds for Irish companies over the coming year.

Despite this, the wider Irish economy is expected to grow at a solid pace in 2019. Indeed, some may say that the Irish economy is thriving relative to other European countries. IHS Markit forecasts GDP growth of 4.0% in 2019, keeping Ireland as one of the quickest-growing eurozone economies. An open economy, strong inflows of foreign direct investment and a highly educated and productive workforce are just some of the reasons why Ireland will see sustained growth of its economy in 2019.

With just 66 days before Brexit day arrives, all eyes are on Westminster as many Irish firms wait with baited breath for a deal to emerge.

1These sectors include manufacturing of food and metal products as well as transport industries.