Possible contracts suspensions in Mexico can make Pemex save $650 million

As soon as the crisis hit the Mexican oil market, a reaction was expected from Pemex, the country's main operator. As companies around the world were cutting investments, revising portfolios, postponing contracts, the national company took a different approach and stick to the plan to recover the Mexican oil production curve maintaining its original investment program.

But it didn't take too long to the company realize that some extra measures would have to be taken. At the height of the crisis, in April, with a record debt of $105 billion dollars, falling sales and the Mexican barrel reaching negative values for a moment, Pemex announced a cut in investments for 2020 equivalent to 15% of the original value. A number that, despite being important for the company´s financial situation in the short-term, can hugely impact the local supply chain, historically dependent on contracts with the oil company.

The offshore services market was the first to be hit by the company's budget readjustment. Today, the Mexican offshore rig fleet, entirely made up of jackups, has 36 units under contract from private managers, the highest number since 2015. At a time when contract negotiations appeared to be recovering, the crisis has set in and the outlook is now foggy. Although there is no official announcement, Pemex seems to have plans for the suspension of more than a half of its offshore rig contracts. The movement would save some money and guarantee some liquidity to face the lack of oil demand and the new level of oil prices. 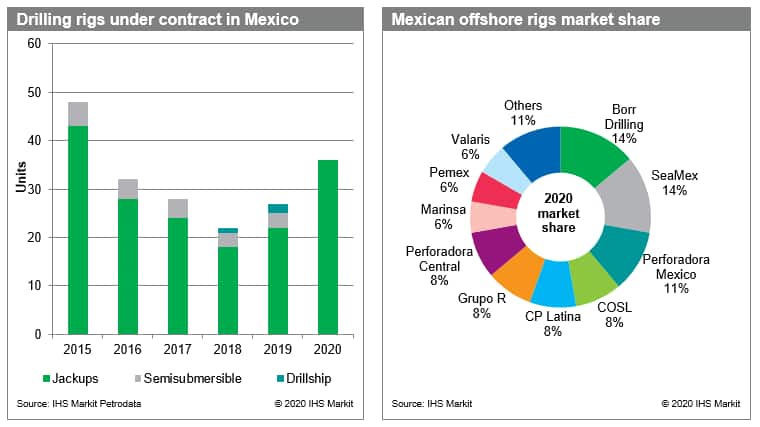 Among the companies most affected by possible suspensions are Perforadora Mexico, Perforadora Central and Seamex-an affiliate of Seadrill. National suppliers tend to suffer a lot from the suspension of their contracts since they are historically dependent on Pemex, and there is no expectation that IOCs would settle new agreements with local companies.

Pemex's current contract suspension plan considers halt periods, mainly in the second half of 2020 and 2021, which could directly affect the drilling in Cantarell and Ku-Maloob-Zaap assets. In principle, drilling in the priority fields will not be affected since activities are already behind schedule, and interfere on suppliers' contracts could add some more delays.

At the same time these suspension measures heavily hit the local supply chain, IHS Markit studies show that Pemex can save almost $650 million, which is equivalent to about 40% of the investment cut announced in April. This would not be an unprecedented move in the company's history. In the past, Pemex has suspended other contracts, both for rigs and supply vessels, and reactivated them later.

The offshore rig market seems to be only the first one to be directly affected by Pemex's cost saving measures. Contracts suspension is also expected to impact well services and the offshore support vessels market. On the other hand, the strategy is used as a way out for Pemex, which as of 2019 was the most indebted oil and gas company in the world. After a combined result of $25 billion dollars loss in the first semester of 2020, the company realized that some prompt measures need to be taken.