Despite the earlier optimism among some owners, January hasn't been an easy month for the Very Large Crude Carrier (VLCC) segment. There is still a lot of activity, but cargoes seem to have marginally decreased month-on-month in parallel to an easy ongoing vessel availability. More than half of the February programme is already covered, which has added more pressure in the Middle East Gulf during the last couple of weeks. The only positive aspect is that recent performance makes owners more resistant to any further downside, with the first signs of stability being there to observe since mid-January. This could quickly improve the sentiment as we approach next month, while the period market is still looking rather optimistic. But for now, spot rates are expected to remain under significant pressure by the end of this week. The fleet of laden VLCC in the Arabian Sea has dropped further, based on data provided by the Maritime Intelligence Network. 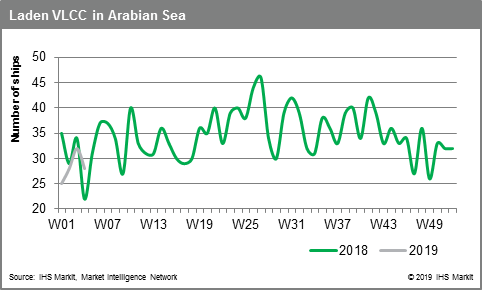 We expect at least 35 more Middle East Gulf (MEG) fixtures to get finalised for February, but there is concern as there are more than 85 units still available in the spot market. In the East, charterers have been fixing to China below wordscale (WS) 55, with rates recently moving further down. Meanwhile in the West, rates moved around WS 25 destined for the US Gulf. 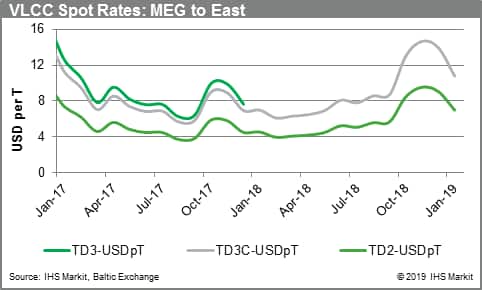 Demand for VLCCs has been rather limited in West Africa to China as well, with rates moving from around WS 57 earlier this month to levels below WS 54. Rates have softened as expected, driven by the MEG settling lower and more units moving to the east, driven by hopes for higher activity in the USG/Caribs. Ballasters moving away could have an impact next week. Rates for VLCCs heading to West Coast India stand around USD 3.3 Million (Mn). 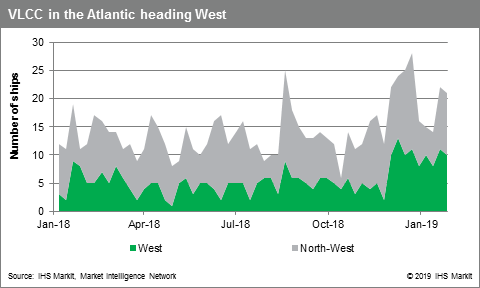 Optimism has been found once again on the other side of the Atlantic, with stronger demand expected to allow the market to gain some momentum. A great amount of available tonnage has been absorbed by the higher expectations for the US loadings so far. As we already have 36 loadings fixed in the USG/Caribs for February, rates to South Korea marginally improved to USD 6.15 Mn from USD 6 Mn a week ago. Rates for vessels heading to Singapore moved further up to USD 6.35 Mn. But as the region starts looking more crowded, there is concern that levels might not be supported since older units are willing to move down to USD 4.7 Mn with a destination to West Coast India. Demand should remain rather healthy, at least in the short term.

VLCC fixtures in the North Sea were only limited as expected, with only occasional activity observed. Rates were pushed lower to USD 6.2 Mn to South Korea. As the Chinese New Year approaches, owners tend to expect heavier fixing activity just before the holiday pause, with ballasting alternatives still popular but not attractive as before.