The Trade Numerologist: Coal Came Back From the Dead in 2018

Coal is having a rebound moment. Even as US and European miners endure bankruptcies, and regulations to cap carbon emissions, the black rock is gaining business in parts of Asia and Africa.

Developing countries are building a new generation of coal-fired power plants which will suck up production from major producers like Australia, Indonesia and South Africa.

Coal's revival has been a boon to shipping lines, traders, and mining companies. Global seaborne trade rose around 4% to an estimated 1.2 billion tons in 2018.

Three-quarters of that is thermal coal, which is used to keep power plants burning, feeding the modern economy-- computers, heating and air conditioning systems. The rest is mostly coking coal, used to make steel, still a major industry in many parts of the world, especially in fast-growing parts of Asia.

The world's top seven coal exporters all increased shipments by dollar value during the first 10 months of 2018.

The countries buying the most coal are those expanding their supply of electricity generation, and those that still have vibrant steel industries.

Coal's resiliency is surprising for a few reasons. Countries are trying to cut down on their carbon emissions. The World Bank, Deutsche Bank and other financial institutions have cut back on their loans to coal companies.

But the economics still make sense for developing countries in Asia and Africa. Coal-fired power plants are less expensive to build than solar panel facilities, wind farms or other forms of sustainable energy. In addition, it's difficult for counties to invest in renewable energy without denting economic growth. And the US's withdrawal from the Paris accord signaled a relaxation of rules for coal miners.

Unsurprisingly, six of the top ten coal importers last year were in Asia.

Other countries are vying to join that list. In Bangladesh, for example, the government is expanding coal-fired power production. It expects to generate half the country's power with coal by 2030, from under 5%. Its imports from Indonesia have increased from zero to around two billion kg a year.

Coal use is even holding strong in the US, where power plants have been closing their coal-burning facilities and switching to gas. Carbon emissions in the U.S. increased by 3.4% in 2018, after falling for three years in a row, reversal analysts attributed to colder weather and the Trump administration's more favorable regulatory policies.

Shipments to Europe were flat. The European Union is trying to cut down on burning coal to power its cities. However, as Europe phases out its own mines, its countries will still need coal for a while. Germany has said it wants to end using coal in power plants by 2038.

Chinese authorities say they've been shutting coal-fired power plants in order to reduce pollution, but the country and its need for energy are so massive that there's no end in sight to burning coal.

The biggest bright spot in the global coal industry is India, which has been building new power plants to feed its booming middle classes hungry for electricity.

The dominant power of global coal trade and biggest seller to these Asian powerhouses is Australia, which ramped up shipments to Japan, China and India last year.

One strength of Australia's coal industry is its diversification. If you lump hard and semi-soft coking coal together, Australia's coking and thermal coal exports are roughly similar. 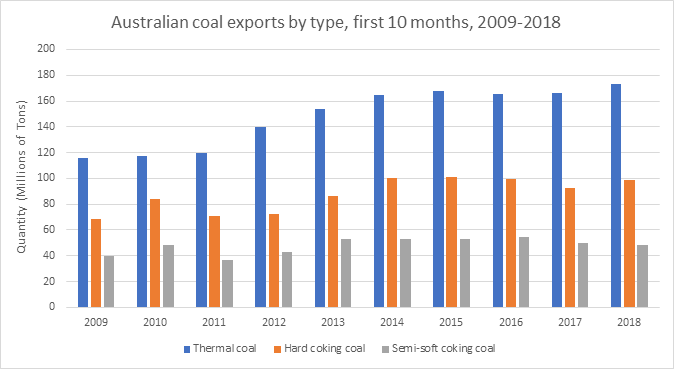 And despite protests from environmentalists, coal's short-term future appears secure. It still accounts for a bit under 40% of all the electricity produced in the world, the same ratio as in the late 1990s.