Strength in official manufacturing data not set to last

Ahead of next week's flash eurozone PMI release, we review the survey findings and the official data after a marked divergence has become apparent. We find that, based on the reliable signalling power accrued by the PMI over the past 25 years, the recent upturn in official manufacturing data will soon reverse to confirm that the goods-producing sector has entered a steep downturn.

The latest publication of official data from Eurostat showed manufacturing output rising 1.7% in August, almost entirely reversing a 1.8% decline in July. The improvement pushed the three-month-on-three-month growth rate up to 1.2%, its highest since February, and the annual rate of increase jumped to 3.4%, its highest since September of last year.

In contrast, the S&P Global Output Index from the manufacturing PMI survey recorded just 46.5 in August, signalling a steep manufacturing contraction after a similar decline in July. The more recent September index reading of 46.3 points to an even steeper rate of contraction, broadly indicative of output falling at a three-month-on-three-month rate of 1.5%.

The official data are therefore indicating a manufacturing sector that has regained growth momentum whereas the PMI survey points to an increasingly severe looking downturn. 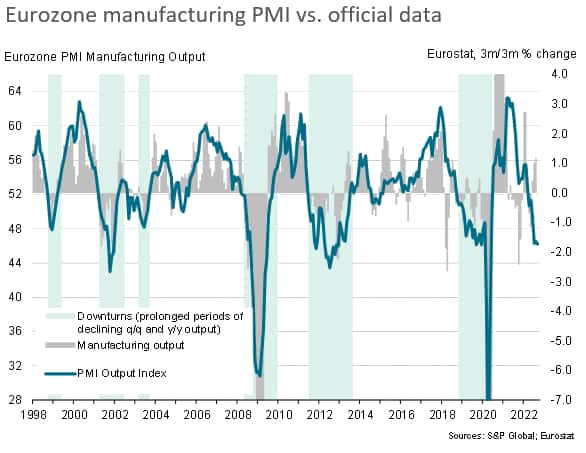 Digging deeper into the official data, there has been a great deal of volatility in the numbers in recent months, and the latest improvement can be at least partly traced to strong variations in growth trends in Ireland, which reported a 16.6% surge in production in August after a 20.6% decline in July.

The PMI has meanwhile been considerably less volatile than the official data, depicting a largely continual slowdown in growth throughout the year to March, after which the PMI has been signalling falling output on a three-month-to-three-month basis according to our regression-based model.

Consistent signalling from the PMI

The upcoming data flow will therefore be important to watch in order to assess the health of the eurozone manufacturing sector. One metric to bear in mind, however, is that - over the 25 years of PMI survey history - whenever the PMI has fallen below 50, the official data have always subsequently signalled a period of sustained manufacturing contraction. On no occasions have the PMI data sent a false signal of impending, prolonged manufacturing decline.

Only in 2021 was there a period when the official data signalled a prolonged manufacturing decline while the PMI was not below 50, but this largely reflected technical factors (base effects) relating to factory lockdowns and the pandemic.

We therefore expect the official data to weaken again in the coming months, in line with the consistent signalling power of the PMI that has been observed over the last quarter century. Further information on the scale and duration of this downturn will be provided by the October flash PMI data, published 24th October.

It is worth pointing out that the European Commission survey has also been signalling a stronger manufacturing performance than the PMI survey, though it should also be noted that this survey appears to have been overstating growth for much of the past 4-5 years when historical comparisons are made against official data. 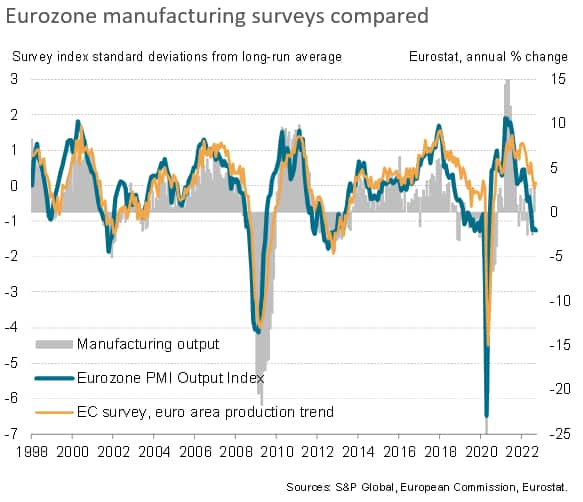