Australian economy under pressure amid strong inflation, but signs of price peak appear

The release of the Australia flash PMI on the 24th of October will be eagerly awaited after recent PMI survey data, compiled by S&P Global, signalled that inflationary pressures remained a major risk to the health of Australia's private sector economy. September saw steep price rises and subsequent interest rate hikes acting to subdue demand and business activity. Business confidence meanwhile slumped to the lowest since the outbreak of the COVID-19 pandemic.

The performance of the economy in 2023 will depend in large part on how resilient demand can be in the face of a range of challenges. Updates on how the PMI's price, output, new orders, and business sentiment indices have fared in October will therefore be of particular interest providing a deeper insight as to where Australia's economy is heading in the near future. 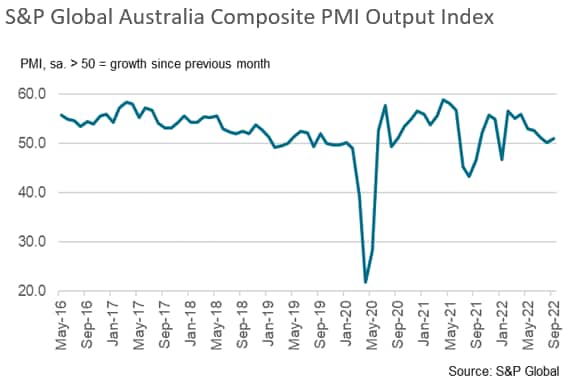 Record rates of input cost and output price inflation were recorded by the Australia PMI surveys only very recently, in April and July of this year, respectively. Higher costs for energy, transportation and wages were reported by companies in September. Meanwhile, anecdotal evidence also suggests that lingering effects from the COVID-19 pandemic, notably in relation to supply chains, continue to contribute to inflationary pressures. Shipping delays are heavily reported on with the local lockdowns in mainland China having exacerbated supply chain issues. The war in Ukraine and the subsequent effect on energy prices has added to price pressures within Australia's economy. 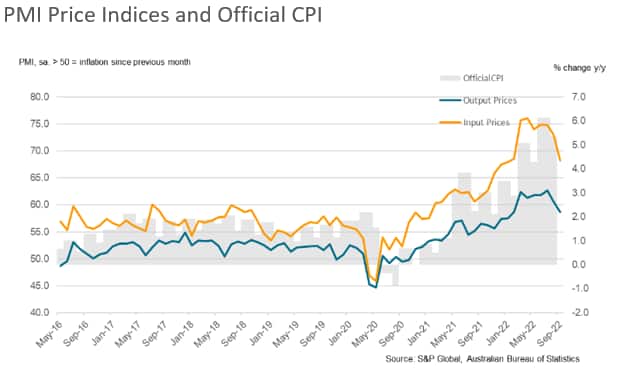 Many of these factors have been evident across much of the global economy. For example, the Global PMI Supply Shortages Index for transport has been historically elevated since the beginning of 2021, peaking only very recently in May 2022, and still showing shortages of transport running at ten times the long-run average in September. Given the close trade links with China, Australian firms are particularly impacted by any disruption there. Meanwhile, new PMI-based comment tracker data show that companies globally are reporting upward cost pressures from higher energy prices to be running at around three times the long run average level. 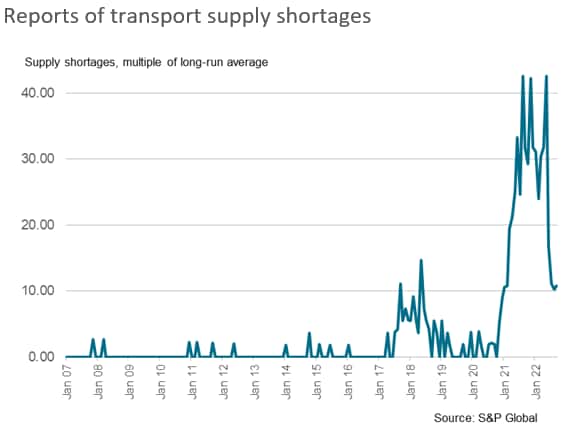 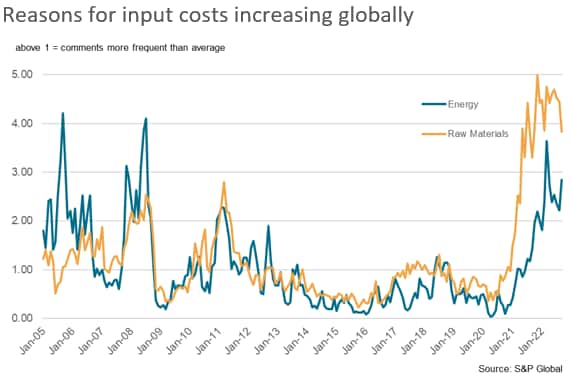 Much like in other areas of the world, Australia has responded to severe inflationary pressures with an aggressive monetary response. The Reserve Bank of Australia (RBA) has increased interest rates for six consecutive months, with the most recent hike in the first week of October taking the base rate up to 2.6%, the highest since 2013.

Through losses in consumer purchasing power, elevated rates of inflation certainly pose downside risks to activity and consumption. The PMI survey data indicated that new order growth was stuck near a six-month low in August and remained muted in September. Anecdotal evidence has suggested that high output prices have been a key driver in softer demand growth. 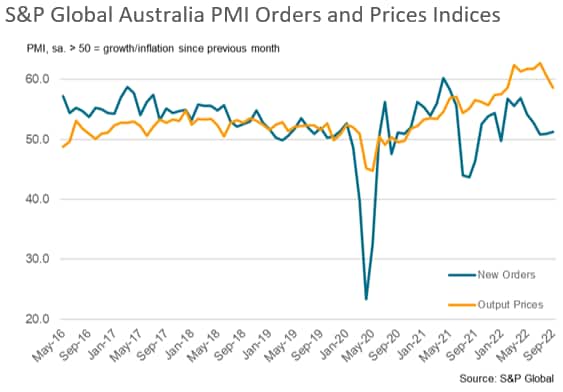 On a more positive note, inflationary pressures have begun to ease. Rates of both input cost and output charge inflation fell in September to the softest since the first quarter of the year. Moreover, at 0.25 basis points, the most recent interest rate hike made by the RBA was lower than markets had anticipated and suggests a less aggressive tightening going forward if the pattern of weakening output growth and slower price rises persists.

The easing in pricing pressures and the softer rise in interest rates are both positive signs that the Australian economy may remain in growth territory over the rest of 2022 and avoid the recession that is likely to be seen in many other areas around the globe. S&P Global Market Intelligence currently forecasts GDP growth of 2.3% for 2023, down from 3.8% in 2022.

Tighter monetary policy and falling global economic activity could put the economy at risk of falling into contraction, however, especially given the low level of business sentiment in the most recent PMI survey.

Overall business sentiment has weakened significantly since the start of the year. The latest S&P Global Australia PMI data revealed that the Future Outlook Index was the lowest since April 2020 and among the weakest on record (since May 2016). Panel members have frequently cited concerns surrounding the effects that the ongoing cost of living crisis and the recent interest rate hikes will have on the wider economy. The PMI data will show how these trends evolve over the remainder of the year, with flash data for October released on the 24th. 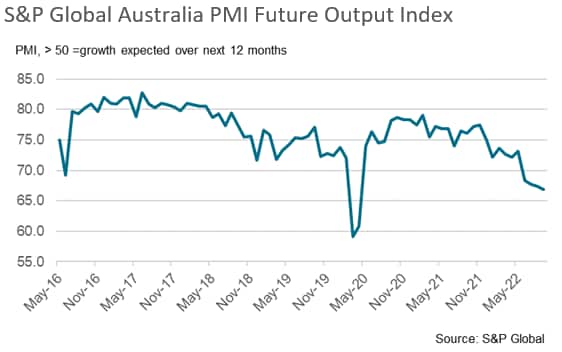