Manufacturing input costs rose at an accelerated rate in September, increasing at one of the sharpest rates seen over the past decade as supply shortages were exacerbated by ever-higher shipping costs. Demand growth cooled, however, alleviating some of the upward pressure on prices, linked in part to less companies building safety stocks compared to earlier in the year.

The JPMorgan Global Manufacturing PMI, compiled by IHS Markit, showed average factory input prices rising at the third-fastest rate recorded over the past decade, the rate of increase accelerating from August to equal that seen in July though fall slightly short of May's recent peak.

The rise in costs was first and foremost again linked to suppliers being able to hike prices amid widespread shortages, creating a sellers' market for many inputs from electronics components through to basic raw materials used for construction industry products. Average suppliers' delivery times continued to lengthen globally at a rate unprecedented in almost a quarter of a century of survey data, exceeded only by those recorded in the prior three months, underscoring the unparalleled supply chain delays being recorded in recent months as a result of the pandemic.

Not only has the pandemic seen surging demand for many goods, the health crisis and associated lockdown measures has seen production of components and logistical capacity hit hard, with the recent Delta variant placing additional pressure on production capabilities in many important export-oriented Asian economies in particular, notably China, where manufacturing output has now fallen for two successive months. 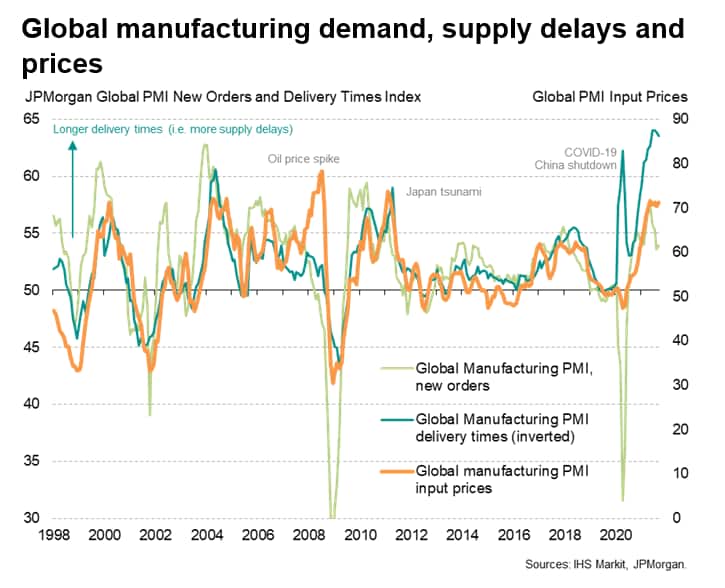 September also saw a rise in the number of companies that reported higher shipping costs to have contributed to higher average input prices. Higher shipping prices were reported by 15 times the normal number of manufacturers during the month, the highest proportion ever recorded. 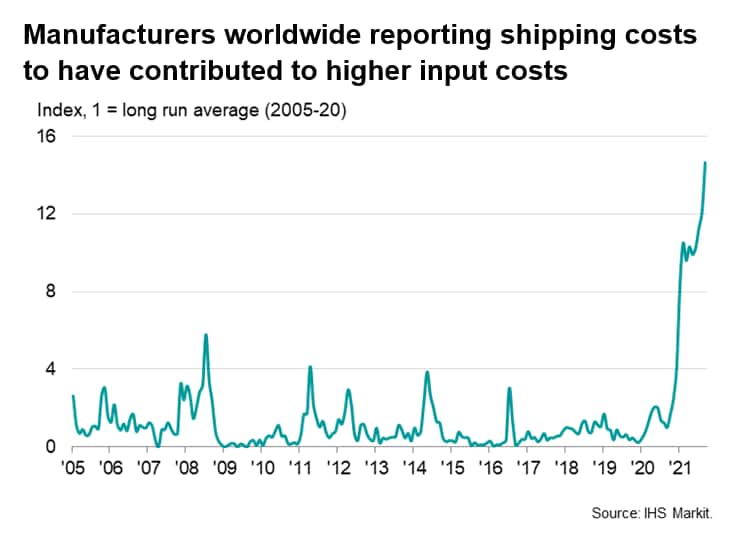 A factor that has helped alleviate some of the pressure off both supply chains and prices, however, has been a weakening of demand growth compared to earlier in the year. Globally, new orders for manufactured goods grew at the slowest rate for 12 months in August and only gained slightly more momentum in September.

Part of this slowdown in demand is associated with fewer manufacturers building safety stocks of inputs. According to our analysis of anecdotal reporting from manufacturers, emergency stock piling activity peaked in May and has now fallen to the lowest since February, though notably continues to run considerably higher than at any time prior to the pandemic. 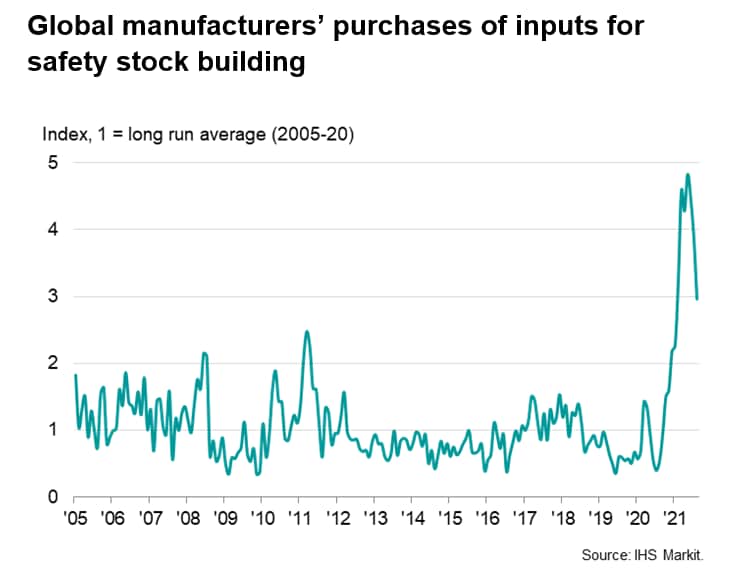 Some of the easing in demand could prove temporary, however, reflecting a drop in spending (especially among consumers) amid the increased spread of the Delta variant in the weeks leading up to the September PMI survey data collection.

It should also be noted that part of the drop in the new orders index reflects the fact that some producers, impeded by a lack of one component, are ordering fewer other inputs. For example, a car producer facing a lack of semiconductors will currently be ordering fewer windshields, batteries, steel components and so on, as their production run has been curbed.

The suggestion is, therefore, that demand could revive once certain key component bottlenecks are resolved, adding renewed upward pressure to prices. 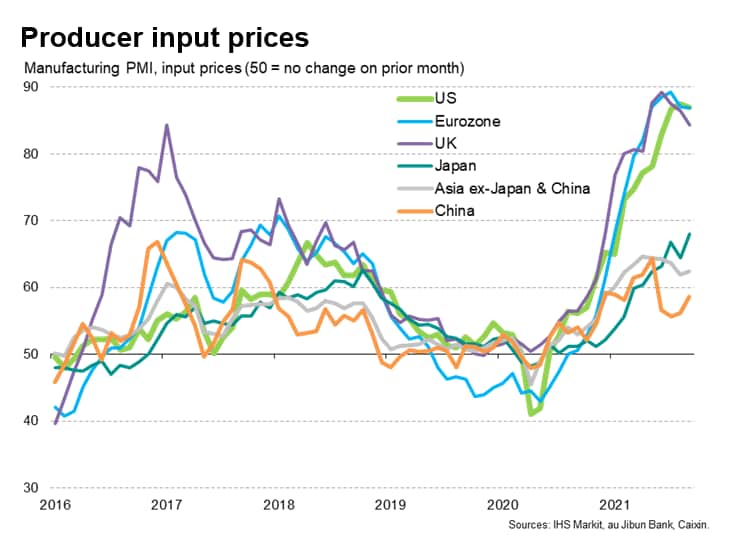 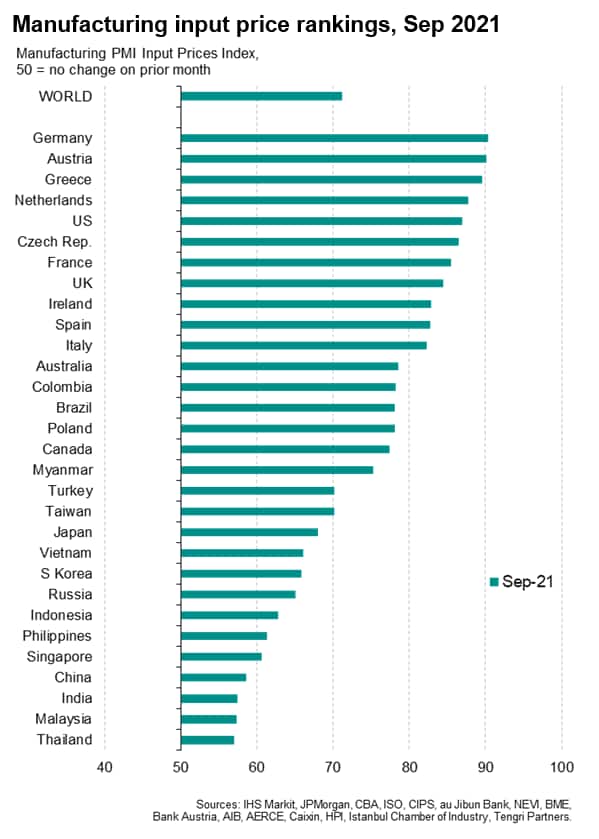 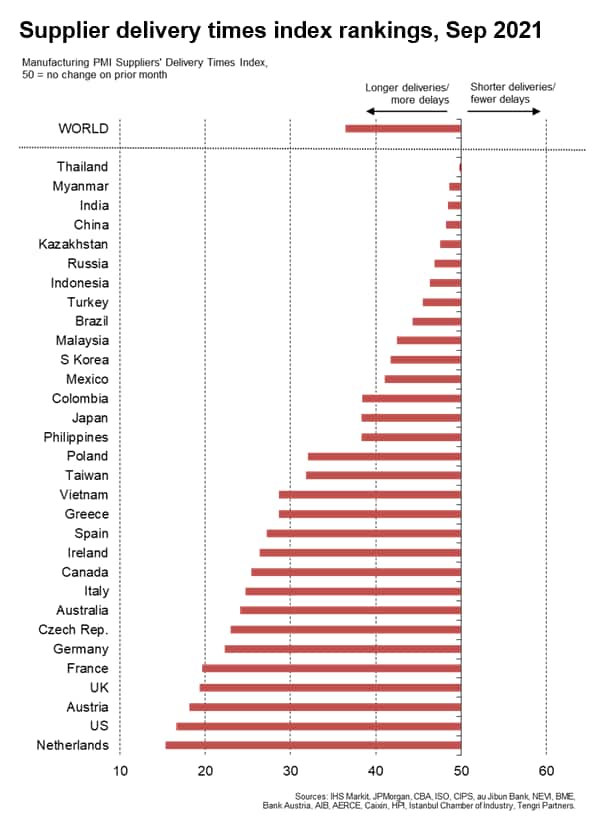 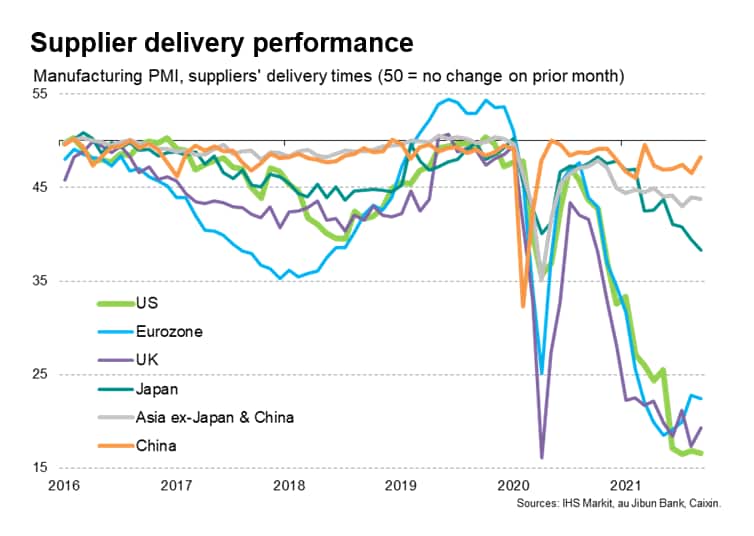