The Eurozone economy slipped into a steeper downturn at the start of the fourth quarter, the rate of decline hitting the fastest since April 2013 barring pandemic lockdowns. Manufacturing, and energy intensive sectors in particular, reported the steepest output loss, but services activity also continued to fall at an accelerating rate amid the ongoing cost of living crisis and broad-based economic uncertainty.

Business confidence in the year ahead meanwhile remained mired at one of the lowest levels seen over the past two years, though steadied compared to September. 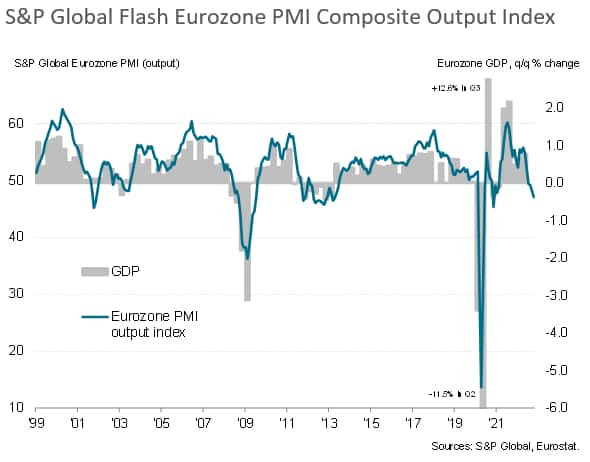 The eurozone economy looks set to contract in the fourth quarter given the steepening loss of output and deteriorating demand picture seen in October, adding to speculation that a recession is looking increasingly inevitable. The S&P Global Eurozone PMI® Composite Output Index fell from 48.1 in September to 47.1 in October, according to the preliminary 'flash' reading based on approximately 85% of usual survey responses.

The PMI has now registered below the neutral 50.0 level, indicating falling business activity levels, for four consecutive months. The rate of decline has accelerated over this period to reach the fastest since November 2020. Excluding pandemic lockdown months, the latest reading was the lowest since April 2013.

Contraction led by manufacturing, and Germany

Manufacturing led the downturn, with factory output declining for a fifth month running and slumping at a rate not seen prior to the pandemic since July 2012. Service sector output also fell, down for a third consecutive month, contracting to a degree not witnessed outside of pandemic lockdowns since May 2013. 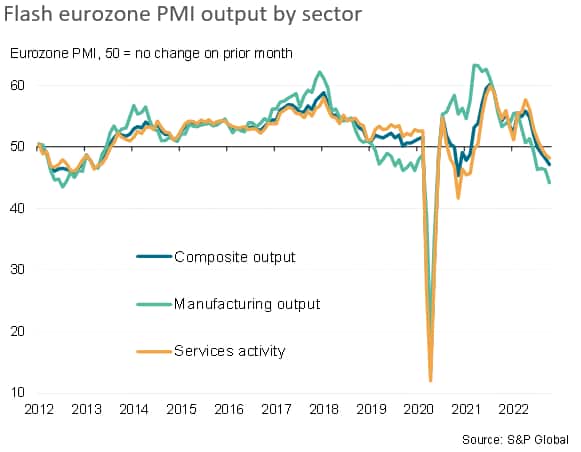 Any growth was confined to technology, industrial services and pharmaceuticals & biotech firms. Some of the steepest downturns were seen in the chemical & plastics and basic resource sectors, often reflecting high energy dependencies.

Within the euro area, the steepest decline continued to be recorded in Germany, where the composite PMI sank to 44.1, its lowest since May 2020 and, excluding the pandemic, its weakest since June 2009. Germany's manufacturing and service sectors both reported steep and accelerated rates of contraction.

Output meanwhile stalled in France, the composite PMI registering 50.0 from 51.2 in September, representing the first month in which output has failed to grow since March 2021. A modest expansion of service sector output offset a marked (albeit moderating) decline in manufacturing.

Elsewhere across the region, output fell for the second successive month, dropping at the fastest rate since January 2021, and excluding the pandemic since June 2013. A modest decline in service sector output was accompanied by a steeper fall in factory production. 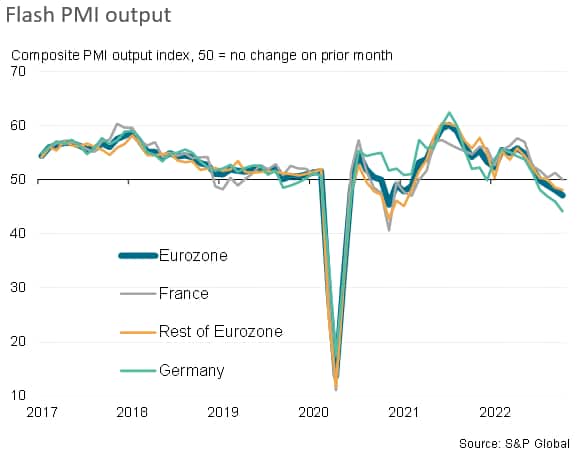 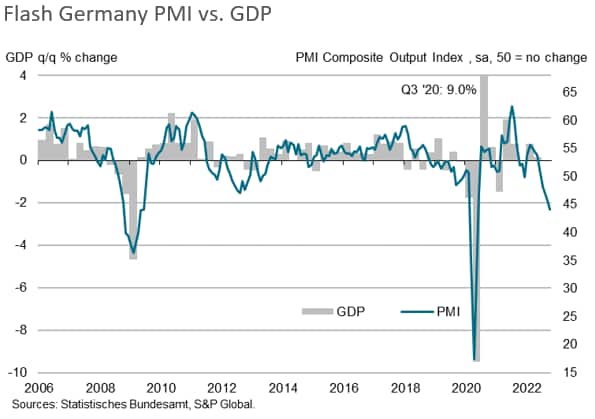 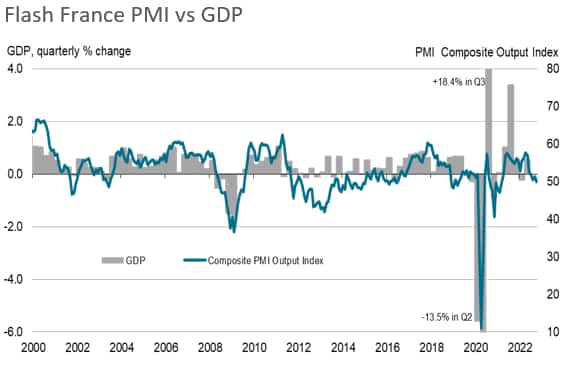 While October's headline flash PMI is consistent with GDP falling at a modest rate of around 0.2-0.3%, demand is falling sharply and companies are increasingly growing worried over high inventories and weaker than expected sales, especially as winter approaches. The risks are therefore tilted towards the downturn accelerating towards the year-end.

New orders placed for goods and services meanwhile fell for a fourth straight month, the rate of loss accelerating to a pace not seen since December 2012 barring pandemic lockdown months, to indicate a steepening downturn in demand. Excluding the pandemic, the drop in manufacturing orders was the sharpest since April 2009, while the decline in new business inflows into service sector companies was the steepest since June 2013.

The drop in new orders meant companies continued to rely on existing backlogs of work to help maintain business activity levels, causing backlogs of orders to fall for a fourth month in a row, led by a particularly sharp decline in manufacturing. The backlogs decline was most marked in Germany, whereas France reported rising outstanding business. 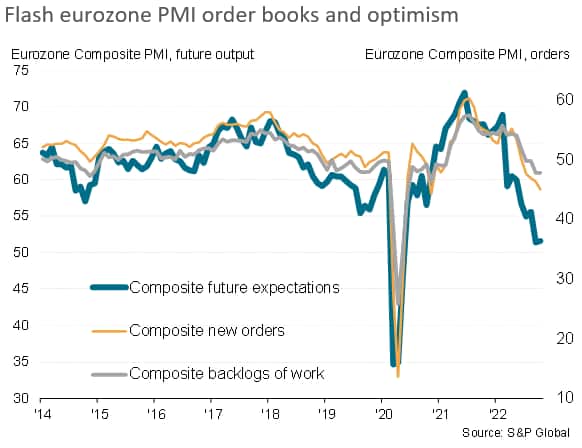 Business expectations for the year ahead remained subdued, running at the second-lowest since the early pandemic lockdowns. Confidence was especially low in manufacturing, and particularly in Germany, reflecting concerns over energy as well as the rising cost of living and global growth slowdowns. While sentiment picked up slightly in the service sector from the previous month, it remained weaker than at any other time since early-2020 and far below levels seen earlier in the year, linked principally to concerns over the rising cost of living and tightening financial conditions.

While employment growth ticked up slightly in October, the latest gain was the third-lowest seen over the past year-and-a-half, reflecting job cutting at some firms amid signs of surplus capacity relative to sales and a broader reticence to hire amid uncertainty regarding the outlook.

Although factory output was again subdued in many cases by component shortages and concerns over energy, October saw the overall incidence of supply chain delays ease to the lowest for just over two years. Companies reported fewer component shortages and improved shipping, albeit often linked to suppliers being less busy due to weaker demand. Input buying by manufacturers fell at one of the steepest rates seen since the global financial crisis, reflecting lower production requirements and increasingly broad-based deliberate inventory reduction policies amid weaker than expected sales. 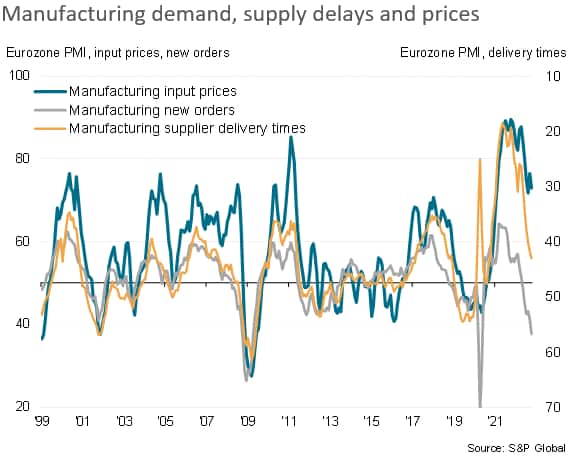 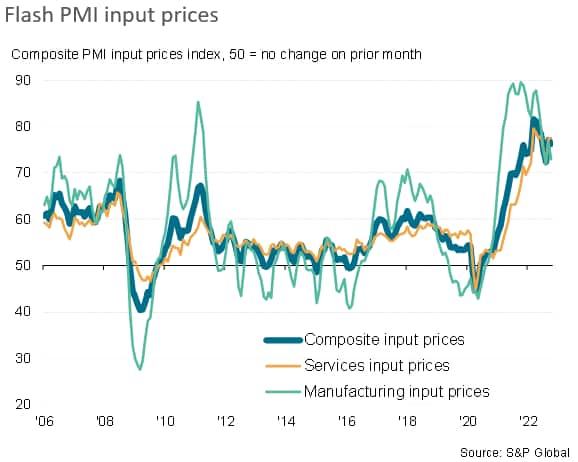 Higher costs fed through to a stubbornly high rate of increase of prices charged for goods and services, which dipped only marginally compared to September to register the sixth-largest monthly increase since comparable data were first available in late-2002. Rates of selling price inflation cooled only marginally in both manufacturing and services, in both cases remaining far higher than anything ever seen prior to the pandemic. 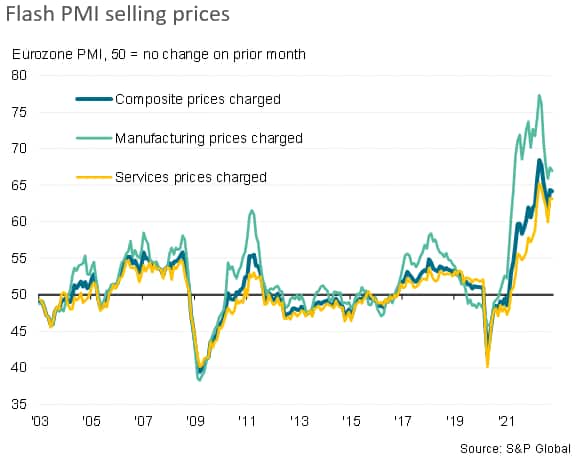 ECB to add to economy's headwinds

Price pressures therefore remain stubbornly elevated, as rising energy and staff costs, and the weakened euro, offset any lowering of commodity prices linked to improving supply conditions. As such, the elevated survey price gauges will likely add the ECB's resolve to tighten policy further in the coming months despite the growing recession risk. But there will likely also be some growing discomfort among some policymakers regarding the economic impact of tightening policy too aggressively in the face of other economic headwinds. 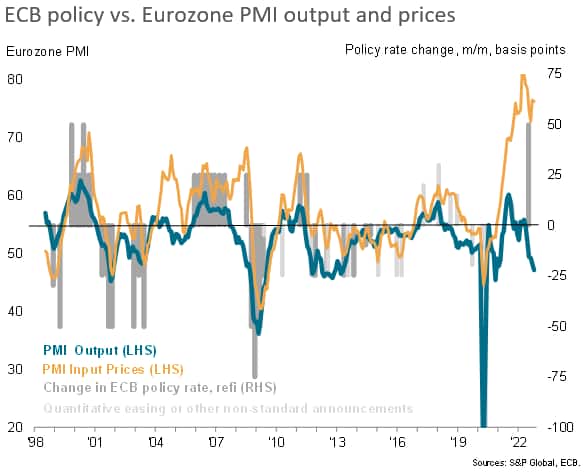