Disappointing flash PMI data for the eurozone signalled an increased risk of a further slowdown, pushing the euro currency down 0.5% against the US dollar. The Europe-wide Stoxx 600 index also dropped 0.5 per cent, while the German 10-year bond yield fell below zero for the first time since 2016.

The data add to speculation that the ECB will need to take further steps to shore-up the eurozone economy in coming months, the central bank having already made an about-face from its hawkish stance adopted throughout much of 2018.

The eurozone economy ended the first quarter on a soft note, with the IHS Markit Eurozone Composite PMI® falling from 51.9 in February to 51.3 in March, according to the preliminary 'flash' estimate. The March reading was the third-lowest since November 2014, running only marginally above the recent lows seen in December and January. 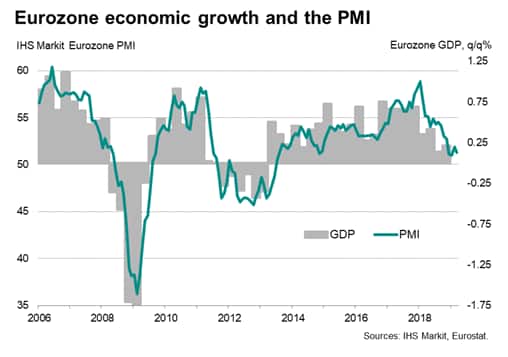 The data therefore suggest that a rebound in February from one-off factors such as the yellow vest protests in France appears to have already lost momentum.

The headline manufacturing PMI in fact fell to its lowest since April 2013 as downturns in factory output and new orders gained momentum. While the drop in factory output was the steepest for just under six years, the deterioration in new orders was more marked and the sharpest since December 2012. The latter was fuelled by the largest fall in new export orders since August 2012. 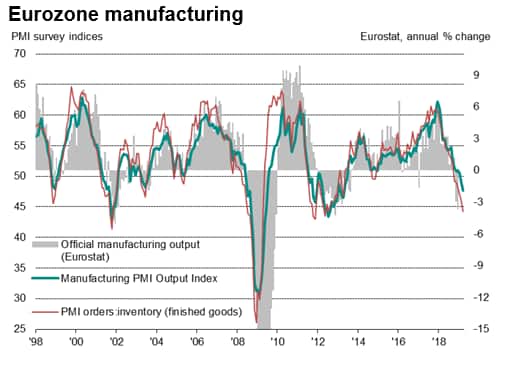 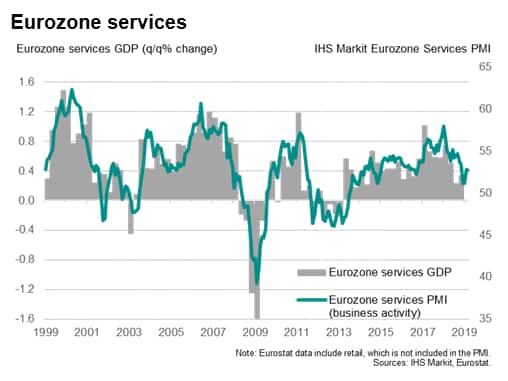 While continued growth in the service sector meant overall new order growth merely stagnated for a second successive month following a slight decline in January, the overall level of backlogs of work dropped for the third time in four months.

The overall reduction in backlogs was the largest since November 2014 and is indicative of excess capacity developing in the economy. Employment growth consequently slowed, down to the joint-weakest since September 2016, as increasing numbers of companies reviewed their payroll requirements in the light of reduced workloads. 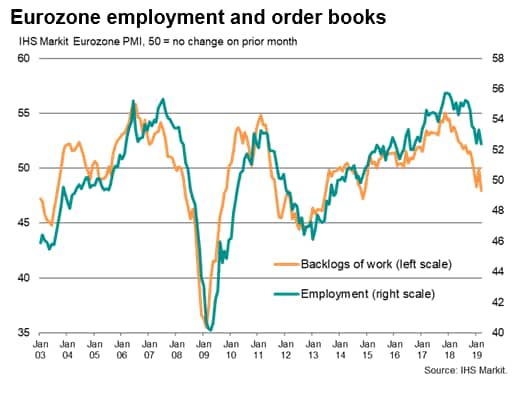 Companies' expectations of output in the coming year meanwhile slipped lower, running above the lows seen at the turn of the year but remaining among the weakest recorded since late-2014. Manufacturing optimism remained especially low, easing to the gloomiest since December 2012.

Forward-looking indicators such as business optimism and backlogs of work therefore suggest that growth could be even weaker in the second quarter. Similarly, a weakening in the new orders to inventory ratio in manufacturing adds to the likelihood that the sector's woes will deepen in coming months. Worryingly, with order book backlogs shrinking at the steepest rate since late-2014, more and more companies are pulling back on hiring, and likely also reviewing their investment spending.

Any such further loss of growth momentum in the second quarter compared to the 0.2% GDP rise signalled for the first three months of the year would raise doubts on the economy's ability to grow by more than 1% in 2019. While recession is not being indicated, the risks of the economy sliding into a contraction later in the year have undoubtedly risen. Much will depend on the ability of the service sector to continue to offset the weakness of manufacturing. Unfortunately, historical comparisons suggest that it is unusual for services to exhibit sustained growth in the absence of a healthy manufacturing sector. 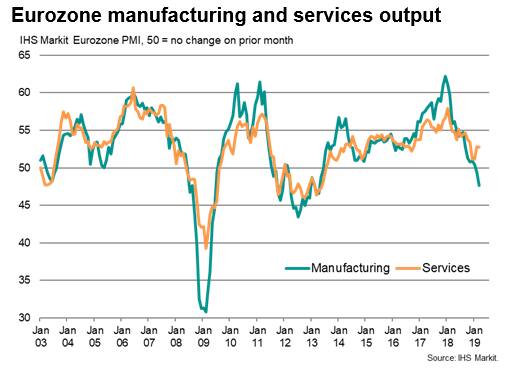