Survey evidence points to rising business investment and expansion in the UK, suggesting that companies may be shrugging off uncertainty caused by Brexit.

The UK economy got off to a poor start in 2017, with GDP rising by just 0.2%. Much of the slowdown was attributed by the official statisticians to weaker consumer spending. PMI business surveys painted a similar picture, with consumer-focused sectors such as hotels and restaurants, other consumer services and consumer goods manufacturers reporting subdued activity. Companies commonly blamed poor sales on consumers being squeezed by higher prices and weak wage growth.

However, both the official and survey data indicate that some of the consumer slowdown appears to be being offset by stronger growth in business-to-business and financial services sectors, as well as improved business investment. It is the latter that is perhaps the most encouraging in terms of the UK economy's near-term growth prospects.

The official data showed business investment rising 0.6% in the first quarter of 2017, its largest gain for nearly a year. Investment was 0.8% higher than a year ago; the first annual increase since the end of 2015.

The improved investment trend had been signalled in advance by the PMI survey's index of new orders for investment goods. These are orders placed at firms manufacturing plant, machinery, tech equipment or other 'capital' goods. This PMI survey index has a close correlation with the official business investment series, though acts with a lead (see first chart). Having risen to elevated levels throughout much of late last year, this series has been signalling strong capex growth throughout the year to date up to May. 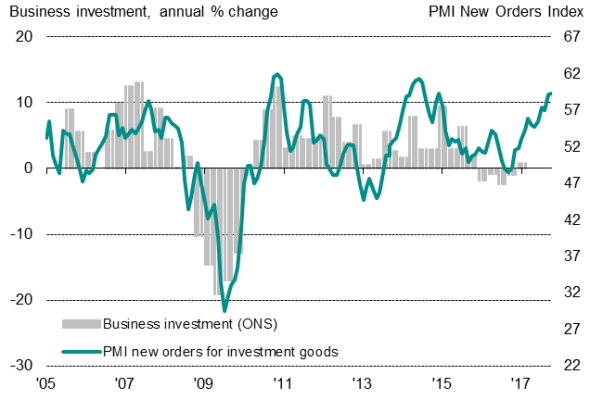 *Based on three-month moving average.

Demand for staff and job vacancies 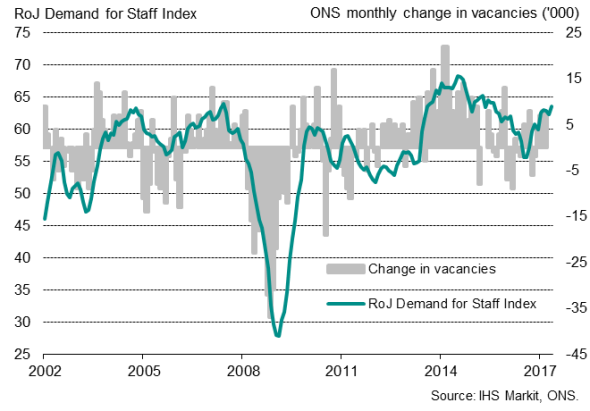 Hiring and investment both rising 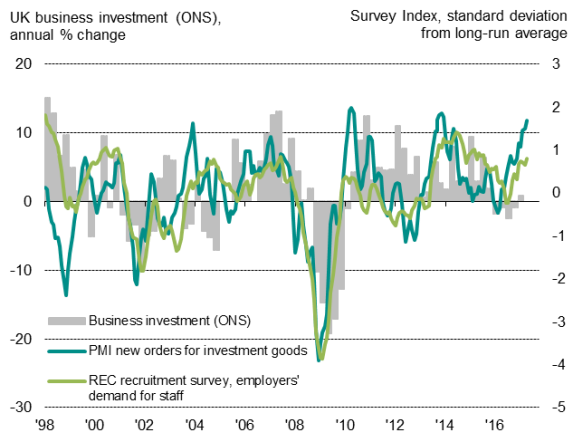 While some of the recent strength of new orders of investment goods can be explained by rising exports, the main upward thrust to sales appears to be coming from the home market.

The signs of rising investment from the official and survey data have been accompanied by strengthening demand for staff from companies.

Recruitment companies reported the strongest rise in demand for staff from employers for almost two years in May, resulting in a marked upturn in the number of people placed in permanent jobs. The PMI survey's employment index has shown a similar resilient hiring trend so far this year.

So far, official employment data are only available up to March, but also indicted solid hiring (an employment gain of 122,000 in the three months to March). The number of job vacancies continued to rise at a reasonably healthy monthly rate of 7,000, broadly in line with recruitment industry survey data. The latter suggest the number of vacancies has risen further so far during the second quarter.

Both the surveys and official data consequently point to companies being in expansion mode in terms of both rising capex and hiring. This therefore appears to be a case of companies preparing for better times ahead (and not, for example, substituting labour for capital or vice versa).

Such expansion plans suggest that the economy could see business investment helping to offset weaker consumer spending in the second quarter. However, with Brexit negotiations set to intensify in coming months, there's a chance that business uncertainty could intensify and stymie investment.