Today's ECB announcement saw euro sovereign bonds sell off significantly, but European ETF investors had already been divesting away from the asset class in the run-up to the announcement.

The ECB disappointed the market today when it failed to materially lift its quantitative easing program. While the eurozone's rate setting body did cut the already all-time low deposit rate by a further 10bps, this was not enough to avoid a large selloff in the region's bonds which sent yields off the recent lows seen earlier in the week.

This selloff sent benchmark 10 year bund yields over 10 bps higher points while lower rated periphery bonds fared even worse as the 10 year Italian bonds saw their yields widen by over 22bps. In terms of price return, this selloff means that holders of 10 year German and Italian bonds are now sitting on a 0.9% and 2% loss respectively since the release of the ECB's policy update.

While the market had actively been bidding up eurozone sovereign debt in the last few weeks it appears that a growing portion of investors were uneasy about the trade, as eurozone sovereign bond ETFs had been selling off in the weeks leading up to today's developments. 150 such funds have seen net outflows in each of the last five weeks reaching a cumulative outflow of $1.18bn. 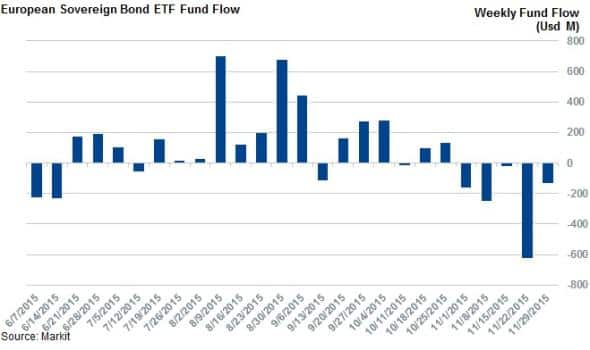 These ETF outflows had been growing as last week saw investors withdraw the most funds from the asset class at any time in the last six months.

While only representing roughly 3% of the assets managed by these funds, the outflow

is significant as it shows growing uneasiness about the asset class even though the market was gearing up for more QE driven rally.

The fund leading the outflows over this period was the iShares Euro Government Bond 3-5yr UCITS ETF which has seen investors withdraw $294m since the start of November, roughly a fifth of its AUM. While investors selling off missed out on the fund's pre-meeting anticipation driven rally, the sceptics have been vindicated as the fund is down by 0.47% in the wake of the afternoon's sell-off.

Economic loss estimates show that climate hazards result in GDP losses that are on average 3.6 times greater for lo… https://t.co/d0gYvSR9D3

Disruption to the global supply chain will be another critical factor that will weigh on the creditworthiness of so… https://t.co/kklyBph27L