Global economic growth edged higher at the start of the third quarter, but failed to break out of the rut of sluggish expansion that has been evident since February. There were promising signs, however, of faster growth in the emerging markets and in manufacturing, as well as encouraging signs of the Brexit shock being largely confined to the UK.

The JPMorgan Global PMI, compiled by IHS Markit from its various national surveys, rose from 51.2 in June (revised marginally from 51.1) to a three-month high of 51.4. While the PMI continues to signal a modest annual global GDP growth rate of only 1.5%, the survey has at least indicated a marginal improvement in the rate of growth for two successive months. 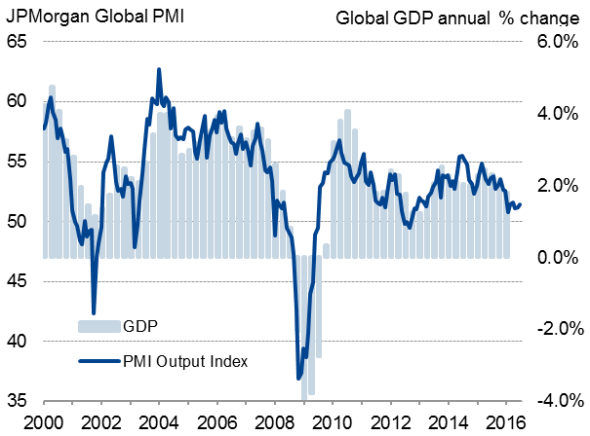 The July upturn was driven by manufacturing, which saw the best improvement in business conditions for eight months, though the rate of service sector expansion held steady at one of the weakest seen over the past three-and-a-half years. 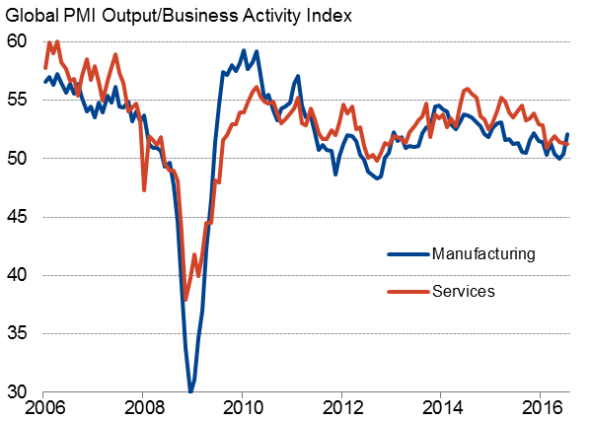 Upturns were seen in both manufacturing and services across the emerging markets as a whole, in both cases showing the largest monthly gains since the early months of 2015. 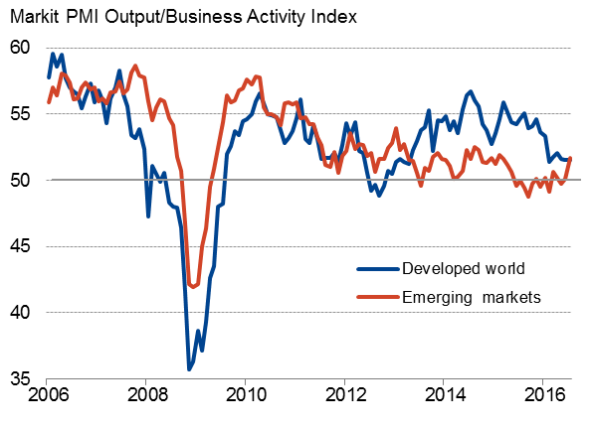 However, the crossover of the emerging and developed world PMIs in July owes as much to the latter's ongoing disappointing pace of expansion as it does to the former's new-found strength.

At 51.6, the developed world PMI for July rounded off the worst three-month growth spell for over three years.

Looking at the largest developed world economies, growth picked up in the US, eurozone and Japan but fell sharply in the UK, with the eurozone leading the pack for a fourth successive month. 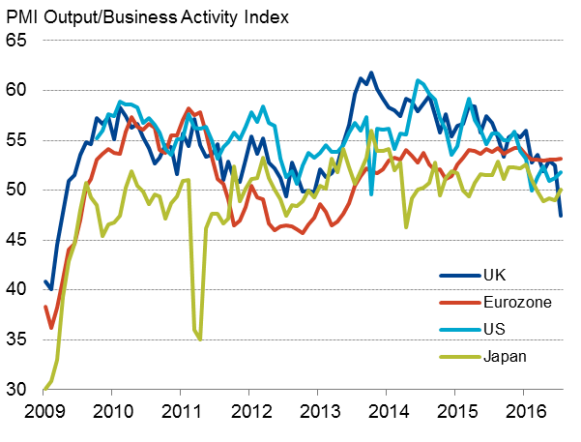 The major development in July was a dramatic and broad-based deterioration in the UK's economic performance in the immediate aftermath of the vote to leave the EU, as indicated by a record fall in the UK composite PMI. At 47.5, the PMI signalled the steepest decline in activity since March 2009, dropping to a level consistent with GDP contracting at a quarterly rate of 0.4%. Employment also fell amid deteriorating order books and heightened uncertainty about the outlook, down for the first time since 2012.

There was little sign of Brexit contagion to the United States, though growth remained subdued. At 51.8, Markit's Composite US PMI in fact signalled the strongest growth for three months. The PMI nevertheless remained at a level consistent with only around 1% annualised growth, suggesting the disappointingly sluggish pace of expansion seen throughout the first half of the year persisted at the start of the third quarter. The rate of job creation remained solid and ticked up to a four-month high, suggesting productivity continued to deteriorate.

Eurozone growth also nudged up to the fastest for six months, albeit by the smallest of margins, with only few explicit signs of Brexit impact. Employment growth also accelerated to a pace not beaten since early-2008. The output PMI reading of 53.2 is nonetheless still indicative of a mere 0.3% quarterly GDP growth rate. Strong growth in Germany was offset by stagnation in France and weaker rates of increase in Spain and Italy.

Japan's economy meanwhile showed signs of stabilising. At 50.1, the composite Nikkei PMI rose above the neutral level for the first time in five months, as a reduced rate of decline in manufacturing was accompanied by a return to modest growth of services activity. The overall picture, however, is one of stagnation, with job losses hitting the highest for almost four years.

Looking at the four largest emerging markets, another robust expansion meant Russia led the BRICs for a third successive month. The composite PMI held steady at 53.5, signalling the best period of expansion since the start of 2013. The July expansion was led by an upsurge in services activity and contrasts markedly with the downturn seen at the start of the year. 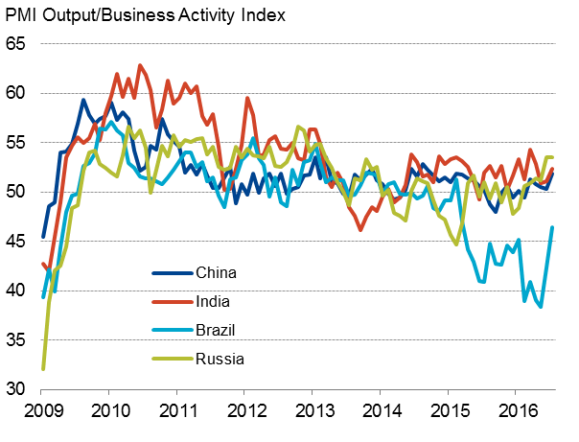 In contrast, Brazil continued to see the worst performance of the four BRICs, though its downturn eased significantly to show the weakest decline since March 2015.

Growth meanwhile picked up in both China and India.

At 51.9, the composite Caixin PMI for China indicated the strongest expansion of business activity since September 2014, fuelled by the largest increase in manufacturing production for two years, albeit with job losses across the economy remaining high by historical standards.

The Nikkei composite PMI for India hit a three-month high of 52.4, reflecting faster growth in both manufacturing and services.