The eurozone deflation risk is currently suggested to be tamed by the persistent acceleration of headline inflation and the unprecedented leap of core inflation since early 2021. The acceleration of eurozone Harmonized Index of Consumer Prices (HICP) from December 2020 to May 2021 was the fastest in the history of series, leaping from -0.3% to 2.0%.

According to the Deflation Vulnerability Index (DVI), eurozone’s deflation risk reached its peak in Q4 2020 due to past policy missteps, persistent low inflation expectations, and a series of adverse economic shocks, including the coronavirus disease 2019 (COVID-19) virus pandemic.

Why is the eurozone considered more vulnerable to the deflation risk?

Policy makers have the theoretical tools to avoid the onset of deflation if they act sufficiently and pre-emptively in practice. In Japan’s experience, monetary policy was insufficiently accommodative, although this was not widely appreciated at the time. This has some parallels with the eurozone’s experience.

The European Central Bank (ECB) only commenced its large-scale asset purchases from March 2015, more than six years after the onset of the global financial crisis and only following another severe adverse shock in the form of the eurozone crisis between 2011 to 2012. The ECB also opted to raise its policy rates despite escalating financial stress in both 2008 and 2011.

The consequence was persistent low levels of core Harmonized Index of Consumer Prices (HICP) inflation over a period of several years and persistent low inflation expectations, which eventually increased the vulnerability of Europe to the deflation risks. The die may already be cast, despite the ECB’s more emphatic and timely responses to the COVID-19 virus shock that heavily impacted the global economy.

An inflation targeting central bank needs to set a sufficiently high floor for underlying inflation, and deliver on this objective, to provide a sizeable buffer. The goal is to reduce the risk of inflation falling so close to zero that if the economy is then hit by a sudden, sharp drop in demand, it becomes susceptible to deflation. Policy makers in the eurozone did not do enough, early enough, to reduce this risk, with core inflation already well below the ECB’s “below but close to 2%” price stability aim prior to the COVID-19 virus shock.

The challenge of restoring lost competitiveness adds to the complexities of deflation in the eurozone’s context. Countries joining the single-currency area give up their ability to regain competitiveness via nominal exchange-rate adjustments. Therefore, they need to adjust through “real” devaluations: i.e., lower relative unit labour cost and price growth. However, if the most competitive economies in the eurozone (e.g., Germany) have low growth in unit labour costs and prices, this increases the risk that the less competitive economies will have to deflate.

Why is deflation such a concern to the eurozone and other parts of the world?

There are various problems associated with deflationary outcomes, including that the effective lower bound for nominal policy rates (around zero, or a little below zero) implies that real policy rates cannot be lowered sufficiently should deflation set in. This is especially constraining if, in a liquidity trap, for example, the economy’s equilibrium real interest rate turns out to be negative.

Another problem is high indebtedness. One way to reduce high debt-to-GDP ratios is to inflate them away, whereas deflation increases debt burdens in real terms. Eurozone member states have struggled to generate sufficiently high nominal growth rates to lower general government debt-to-GDP ratios both through the real growth channel (because of poor productivity and demographics) and via higher prices. Private-sector debt burdens are also high in many eurozone member states.

A related concern is that a mild deflation could turn into a more severe episode, with rising real debt burdens, widespread bankruptcies, and weak aggregate demand, all of which would increase the downward pressure on prices. In an environment of debt deflation, asset prices would come under renewed pressure and a credit crunch could follow, raising financing costs and again exacerbating the downturn and deflation.

Connect with our experts and get insightful answers to your business questions today.
I have a question!

Rising concerns about reflation instead of deflation risk in the eurozone

Market concerns about the possible deflationary consequences of the COVID-19 virus shock have been replaced by worries about a potential resurgence of inflation and its monetary policy implications. The shift of concerns from deflation to reflation in the eurozone stems from a range of factors.

Are the fears of reflation in eurozone justified?

The broader prospects for consumer price inflation appear more benign. S&P Global expects the larger, globally relevant central banks to “look through” short-term influences on inflation and to take a very cautious approach to the withdrawal of their monetary accommodation. Still, financial markets will remain highly sensitive to any indications to the contrary.

Moreover, central banks in economies with currency vulnerabilities and/or less well-anchored inflation expectations such as the European Central Bank (ECB) have already started to respond to the accelerations in their inflation rates, increasing policy rates and signaling more to come.

Key issues to highlight in this respect include:

What does the eurozone deflation vulnerability index suggest currently?

In brief, we created a deflation vulnerability index (DVI) for the eurozone based around 10 economic and financial indicators. These inputs are aggregated into an index on a quarterly frequency. The methodology divides the DVI readings into four categories of risk: minimal, low, moderate, and high.

The eurozone DVI rose markedly over the course of 2020, echoing the reaction to severe prior shocks, including the global financial crisis. Following our latest update for the fourth quarter, the DVI jumped to its highest ever level and rose into the “high risk” category.

It subsequently moderated in the first quarter of 2021, falling back into the “moderate risk category” owing to the higher headline and core inflation rates early in the year.

Sample questions that Ken can address about Europe’s Economic Recovery from COVID-19:

While European economies are on track for exceptionally strong growth rates in Q3 2020 due to the easing of COVID-19 restrictions, upward momentum is already starting to fade. The expiry of measures aimed at limiting the impact of the COVID-19 shock on unemployment from late 2020 onwards is a particular concern.

Continue for more information regarding COVID-19 and the vaccine rollout.

Factors of concerns regarding potential inflation in the eurozone: 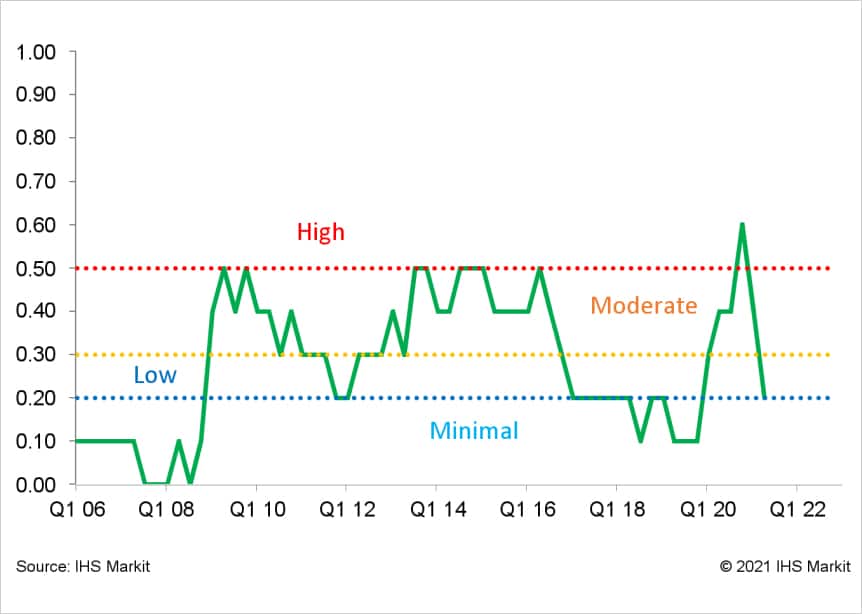 Ken has worked as an economist in the financial markets since the early 1990s, initially for HSBC Global Markets. From 2000 onwards, he was the chief market economist for the euro area at BNP Paribas. Prior to joining S&P Global (now part of S&P Global) in 2018, he was a Managing Director of Global Macro at TS Lombard, an independent research provider. A specialist in European economic and policy issues, his 'out of consensus' calls include predicting as early as 2012 that euro area deflation risk would force the European Central Bank to embark on a program of large-scale sovereign debt purchases despite strong opposition within many member states. He has taken a lead role in the presentation of key forecasts and themes to a broad spectrum of clients across Europe, the Americas and Asia, including corporates, banks and institutional and hedge fund-based portfolio managers. A well-known commentator on economic and financial issues, Ken is frequently quoted in the media and appears on various TV and radio channels.He received his honors degree in economics from the University of Sheffield, UK, and post-graduate qualifications from the Chartered Institute of Bankers.

View Profile
Join our webinars and events that feature experts from an array of industries to learn from professionals directly.
Reserve my seat!

Episode 73: When will APAC economy recover? A regional outlook for 2021

Episode 77: China’s Economic Outlook in the Year of the Ox

Tool time? The outlook for the home improvement market

Lula will return to office in January after winning Brazil's presidential election by the narrowest margin in the c… https://t.co/jDnRQZh5Lk

Taking a turkey break? Tune in to the #ECRpodcast for the latest trends seen in our Purchasing Managers Index dat… https://t.co/8GXun0O1DS

2022 marks the first time in three decades that price increases are set to outpace the rise in current dollar holid… https://t.co/hKi2RjAcKU

“For as much as sales have increased, we expect prices to increase more,” Michael Zdinak, an economist at… https://t.co/RVcMJEzXZm

2023 is likely to be another year out of equilibrium for businesses, markets and governments. Read our blog for hi… https://t.co/LmbSHHUOjj