Who would short Tesla?

After Tesla reported an unexpected quarterly profit on October 23rd, its share price was launched into an upward trajectory. Between October 23rd and the end of November the share price increased by 30%, while the short interest declined by an estimated 23%. The reaction from shorts surprised no one, as Tesla was already one of the most shorted US equities in terms of dollar value and percentage of shares outstanding, leaving relatively few short sellers to get involved as shares were substantially above the 2019 low observed in May. What happened next, however, has left some scratching their heads at the resiliency of short sellers in the face of a relentless rally which took shares up to $780, or +136% since the start of December. There may be more to the story than meets the eye, if that eye is trained only on the stated short interest. 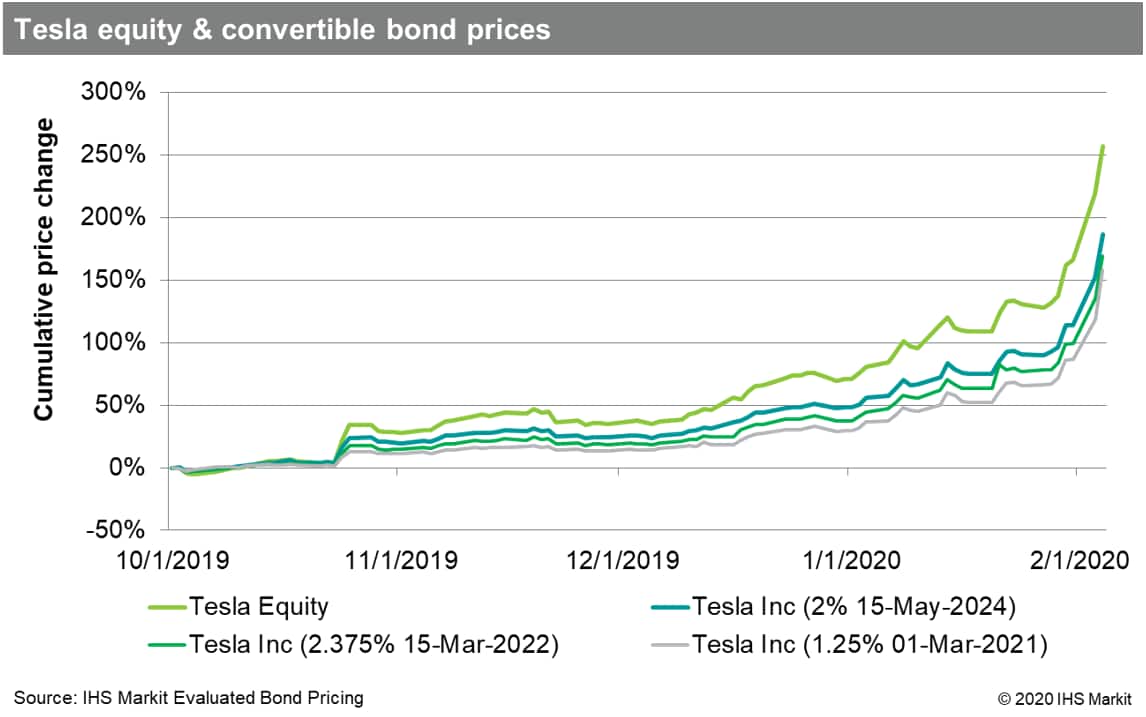 The short interest in Tesla shares was 24.9m shares for January 15th settlement, published by NASDAQ, per FINRA regulated broker dealer disclosures. This suggests that short positions in the electric carmaker only decreased by 1.3m over the first two weeks of 2020 (-5%), while the share price rallied by 24%. Similarly, in December the share price increased by 27%, while the short interest declined by just 8%. Overall that means a 13% reduction in shares short during that 1.5-month span, while the share price increased by 57%. This certainly implies some pain for directional short sellers, however it's worth considering another group which likely increased their short position in share terms during that time: the owners of Tesla's convertible bonds.

The implication is that convertible arbitrageurs have likely been increasing their short positions over the last three months and may have only recently completed the process of hedging the embedded options in this last push higher in share price. That may also mean that directional shorts have reduced their exposure by a much larger amount than suggested by looking at the total short interest. If the owners of the convertible bonds have fully hedged the shares into which their bonds could be converted, that would imply 12.7m shares short, just over half the short interest reported for January 15th. Given the 50% increase in share price since January 15th it seems reasonable to assume some amount of directional short covering, however that analysis is muddied for reasons we'll discuss after a brief discursion. 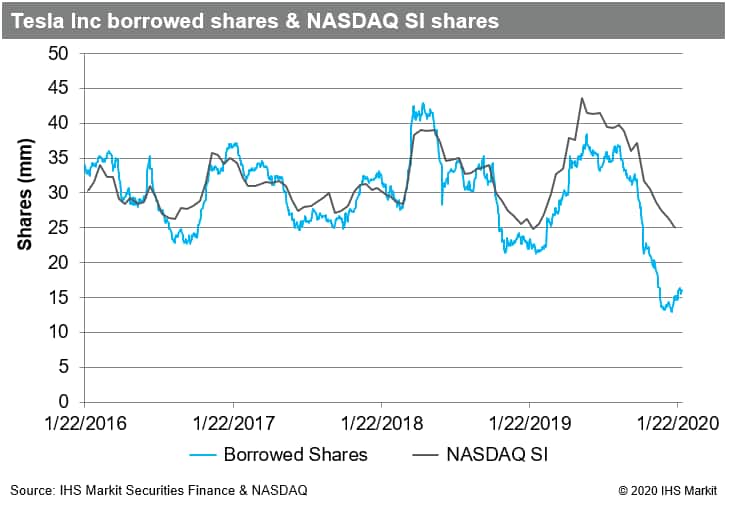 One factor which may have influenced the share price over the recent rally is short exposure to call options. Historically, when Tesla sold convertible bonds, they also purchased calls at the conversion price and simultaneously sold warrants with higher strike prices. The stated purpose for these transactions was to reduce the impact of dilution should the share price exceed the conversion price at maturity, as Tesla could effectively buy back shares in the market with the proceeds of the profitable call option that they purchased. That antidilutive measure would only hold up to the strike price of the warrants that Tesla sold to offset the cost of the call option. As noted in the prospectus for the 1.25% 2021 convertibles: "However, the warrant transactions could separately have a dilutive effect to the extent that the market price per share of Common Stock exceeds the applicable strike price of the warrants on the applicable expiration dates." The strike price for those warrants is $560 per share. In considering all potential forces driving the Tesla share price higher, hedging activity related to the calls Tesla purchased, and potentially Tesla hedging the warrants, which it in turn sold, may be playing a role.

Apart from increased directional long exposure, and potential hedging of short call exposure, the covering of directional short positions may well have contributed to the increase in price since the January 15th short interest publication. Efforts to track short interest in real time, using shares borrowed in the securities finance market as a proxy, have been frustrated over the last 12 months. Broker-dealers have needed to borrow fewer shares to meet the demand from short sellers, which implies a greater ability to source shares from positions in their custody. That may reflect, in part, an increased long hedge on the part of the broker dealers who sold Tesla the call options related to the convertible bond sales, which are now deep in the money. From the start of 2015 to the end of 2018 the average difference between the shares on loan reported to IHS Markit and the short interest reported by NASDAQ was 1.7m shares. Since the start of 2019 the difference has averaged 6.2m shares. Zooming in on the period following Q3 earnings, the implied internalization of borrowed shares increased from 5.7m shares on October 15th to 9.8m shares on January 15th (peaking at 13m shares on Dec 13). The 1.7m increase in borrowed shares YTD likely reflects a diminished ability to internalize the borrow, however convertible arbitrageurs value stability of borrow rather highly, so increase in borrows could also reflect the increased composition of arbs among open short positions.

This article aims to provide some explanation as to why the short interest hasn't declined as much as one might expect as the share price continues to rocket higher. That question of course begs the follow up: If this isn't short covering, what is it? The explanations offered here are: Increasing convertible arbitrage shorts which offset declining directional positions, long buying to hedge short call positions and, in a bit of a cop out, the possibility that directional short positions are declining to a greater extent than can be observed in real time, which only applies to period starting Jan 16. The NASDAQ 100, which counts Tesla as a constituent, has increased in price by just over 30% since the 2019 low for Tesla, which may also be contributing to the buoyancy of Tesla shares. One final answer, which may be the most significant going forward: Increased long positions on the part of investors excited about the dawn of the electric car age are likely playing a role, as they have over the nearly ten years since the company went public.