Central bank meetings, US May CPI and China data in focus

The week ahead finds central bank meetings unfolding in the eurozone, Australia, India and Thailand while a series of inflation data will be in focus, particularly US CPI and consumer confidence figures. China will also release services PMI and inflation data alongside trade numbers for May, which will be closely scrutinised as the virus situation showed early signs of improvements midway into the second quarter. Final Q1 GDP figures from the eurozone and Japan are also lined up in the week ahead.

US Federal Reserve Governor Christopher Waller in his speech this week struck a hawkish tone, highlighting his support for the Fed to further tighten policy rates by 50 basis points for upcoming meetings. This had reiterated the Fed's focus on inflation following the Fed minutes release last week. Certainly, findings from the latest PMI data showed US private sector expansion having been weighed by inflationary pressures while global manufacturing data reflected that supply constraints continued to exert upward pressure on costs for manufacturers. This had also been flanked by news of eurozone inflation hitting a record 8.1% in May, altogether underpinning the hawkish bias for central bankers gathering in the coming week, including the European Central Bank. Details for concluding the ECB's large-scale asset purchases and plans for raising rates at their July meetings are expected, making this one to watch. In APAC, the RBA, RBI and BoT may also raise their policy rates in reaction to recent inflationary trends.

Separately, in the data docket, US and China May inflation numbers will be in focus. Any surprises on the upside may further exert pressure on the market, especially with the consensus already pointing to a month-on-month jump for headline CPI. China's services PMI factory gate inflation will also be scrutinised amid nascent signs of easing COVID-19 disruptions. Moreover, China's May trade numbers will be one to watch after the sharp slowdown seen in April. Other economies releasing CPI figures in the coming week includes Taiwan, Thailand and the Philippines.

UK economy watchers will see the release of services and construction PMI surveys.

Easing supplier delays take some heat out of inflation

An encouraging signal from the May PMI surveys was an easing in the incidence of supplier delays reported in the US and Europe (see special report). Although the indices of supply chain delays generally remain worse than at any time prior to the pandemic, supplier delivery times lengthened in May at the slowest rate since January 2021 and October 2020 in the US and UK respectively, with the eurozone reporting the second-smallest lengthening since the start of 2021.

While tighter supply lines out of China were seen as the main cause of a worsening of lead-times in Japan and to a lesser extent in the rest of Asia, delivery delays also eased within mainland China, which bodes well for production capacity. 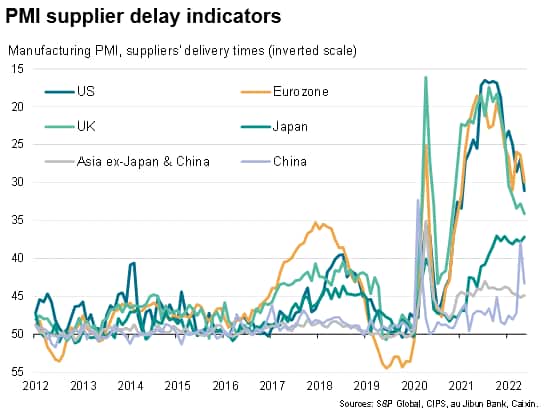 With China set to relax some of its COVID-19 restrictions in June, there is a likelihood of further improvements to the global supply situation in the coming months, which could help drive improved production gains around the world - and also take some of the heat out of prices.

However, the flip side of looser virus restrictions in China on the inflation picture will be reviving demand for many key raw materials, which could fuel another upswing in global commodity prices, notably including energy.

Following the May US labour market report, the May CPI reading will be hotly anticipated in the coming week. Refinitiv consensus currently points to an acceleration of CPI to 0.7% in May from 0.3% previously. This is in line with the S&P Global Flash US Composite PMI indications, which earlier pointed to further growth in cost burdens for private sector firms that have been again passed on to clients at a rapid pace. Given the Fed's focus on inflation, indications of worsening price pressures may garner further attention and policy reactions. As it is, the Fed has already indicated that more 50 basis points hikes are on the table.

Separately, the preliminary June University of Michigan Consumer Sentiment Index will be released next Friday with consensus expectations suggesting improvements. As far as the flash PMI future output index is concerned, private sector firms also reported improved confidence in May.

The ECB meets in the coming week against a backdrop of rising inflationary pressures. The market will be looking for the ECB to conclude their large-scale asset purchases and detail plans for raising interest rates in July, making this one to watch.

The UK S&P Global / CIPS Services PMI will also be released for May following the platinum jubilee weekend.