Three of the largest five economies will hold their central bank meetings this week, including the US, Japan and the UK. Attention very much focuses on the Fed after last week's higher than anticipated inflation figure. Other scheduled central bank meetings include the Philippines, Indonesia, Hong Kong SAR, Switzerland, Brazil and Taiwan. The week will end with flash PMIs for the UK, US, Japan, Eurozone and Australia, which will give a key indication into economic performance at the end of the third quarter.

The US FOMC meeting returns as falling energy costs failed to offset surging prices in other categories, meaning inflation held higher than expected at 8.3%. Subsequently, the Fed's aggressive stance is expected continue with markets pricing in a third consecutive 75 bp hike, though a 100-point rise is also on the table. Interest rates are expected to reach 4.25% by the end of 2022.

Havin been postponed due to the death of Her Majesty Queen Elizabeth II, the Bank of England meeting will take place for which markets will be eager to see the assessed impact of the energy price cap on the bank's inflation projections. That said, the cap is unlikely to impact the bank's immediate policy decision, for which markets are predicting a 50-basis point hike. In contrast to the US, UK inflation figures came in lower than expected amid falls in fuel costs, resulting in the first CPI dip on an annual basis for almost a year. UK inflation none the less remain close to 40-year highs, with rising food costs a particular concern.

Flash PMIs will eagerly awaited amid growing recession concerns. Latest IMI data released last week signalled almost 80% of US investors fear a recession. Flash PMIs will not only provide updates in demand, supply conditions and growth, but will also give an update on the inflation front. PMI price indices have retreated across the board in recent months amid easing supply delays and cooling demand, though remain elevated by historical standards. Also watch out for updated consumer confidence figures in Europe.

The coming week sees the updating of flash PMI data for the major developed economies, and as usual a key focus will be on the macroeconomic signals from the surveys in terms of GDP, production, employment and inflation. However, the surveys can also provide powerful tools for understanding corporate earnings momentum. By capturing changes in key business metrics such as sales, demand, pricing power, margins and productivity, the PMI surveys can provide very timely signals on underlying trends in profits and earnings, as the chart below illustrates for the US. 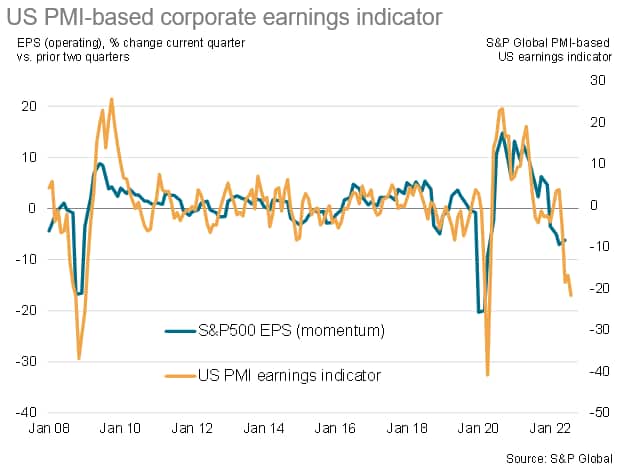 This chart plots a simple composite indicator of earnings drawn from S&P Global's PMI data for the US against earnings per share growth momentum. The indicator, updated in this graphic to August, is currently pointing to the sharpest downward pressure on earnings since the global financial crisis, excluding the initial pandemic lockdown months. This reflects falling demand for goods and services, a margin squeeze from waning demand, declining productivity and a broad reduction of pricing power as supply runs ahead of demand for a wide variety of products and services.

The advantage of the PMI is that earnings indicators such as the above can be compiled for each country and major market sectors, making the upcoming PMI data for September all the more important to watch. Read more in our special report.

The FOMC meeting is the highlight of the week with the Fed expected to announce yet another super-sized hike. Markets are pricing in another 75-bp addition to the Fed Funds Rate. Expectations on the pace of further hikes may, however, be affected by the flash PMIs, which indicated a marked downturn in business activity in August. Also watch the housing market data, including the NAHB index, which has weakened in recent months, and building permits data - where forecasts point to a third monthly contraction.

In Canada, retail sales and inflation will provide an update on the impact of recent aggressive Bank of Canada rate rises. Retail sales growth eased last month while falling gasoline prices relieved some pressure on the prices front.

The Central Bank of Brazil is also expected to implement another hike. The selic rate currently stands at 13.75%.

Final Q2 GDP readings for Spain and the Netherlands will come to light on Friday, but it's the more up-to-date September flash PMIs for the UK and Eurozone which will garner most interest, as well as consumer confidence data. The latter is likely to indicate weak consumer sentiment amid the ongoing cost of living crisis. From a policy perspective, the Bank of England will inevitably hike aggressively again, but the rhetoric will be watched closely amid growing signs, not least from the PMI, of a potential recession.

Japan and Singapore inflation figures will likely remain elevated. A central bank policy decision in Japan accompanies the inflation update, and the BoJ is expected to maintain ultra-low interest rates despite inflation rising above the target 2% rate (2.6% in August). Meanwhile, in Singapore, inflation is expected to run above-trend between 5-6% this year, with data last month pointing to a 7% rise. This increases the likelihood of a tightening of monetary policy in next month's review.

While Bank Indonesia's (BI) 25bp hike last month went against polls, this month a second consecutive increase is anticipated in efforts to keep inflation under control. It's southern-eastern counterpart - the Philippines - will likely see a 50-bps hike with the Bangko Sentral ng Pilipinas (BSP) set to retain its hawkish tone.