VLCCs for Libya? Too many hurdles to overcome

Last year, Libyan crude oil production averaged around 50,000 barrels per day (b/d) lower than the 1 Mn b/d target earlier set by the state. This wasn't achieved despite the steps taken towards recovery which, however, have allowed output to sharply increase for the past two years. But there is still concern, which is primarily driven by the risk of conflict, since the country is effectively split in two parts. Rebel groups have taken under their control areas of the country, in many cases targeting oil facilities which enable them to quickly bargain both monetary and political power.

The country's two major oilfields, Sharara and El Feel, are in the southwestern part of the country, where future outages won't be of a surprise since chronic fuel shortages and security problems can quickly cause the production levels to drop sharply. Sharara is still shut-in for the last two months, after armed groups occupied the site in December.

Almost a decade ago, production stood at 1.6 Mn b/d, almost 75% higher than current levels. However, the future still looks bright for the North African producer. Its state oil company, National Oil Corporation (NOC) has already made its intent clear, planning to increase the country's production to 2 Mn b/d by 2020. For this year, the target is set at 1.6 Mn b/d, which would match the record high levels last seen in 2010, before the civil war started in 2011.

But the country will first have to overcome several severe challenges, both technical and security related ones. Apart from the rebel groups, NOC chairman Mustafa Sanalla has been complaining that only part of the capital spending allocation from Tripoli has reached his company during the last couple of years. The company recently referred to its plan to invest more than US $50 billion in infrastructure. But due to the situation domestically, the company considers foreign investments as well. For this reason, its officials will visit China in the first quarter of 2019 to attract foreign investment into Libya's oil production. China, the world's major importer of crude oil, absorbed around 13% of the country's exports last year. 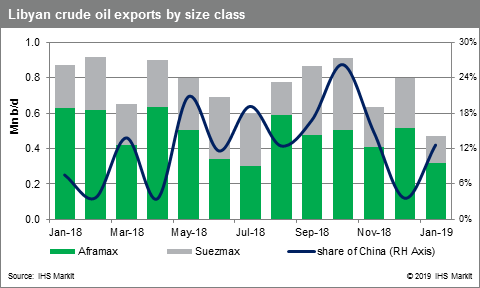 With around two thirds of last year's production exported on Aframax and Suezmax tankers, the big question for shipping is whether we'll experience the return of VLCCs to the Libyan loading activity in near term, assuming recovery lasts. This would allow more volumes to be exported to the Far East, which would increase the average distance significantly. A big step towards this scenario would be El Sharara returning to operation, after being offline since December. This oilfield can produce up to 350,000 b/d. But the situation in the country could remain tense for the long-term.

This might discourage any foreign investment. Among infrastructure projects, of great interest is the construction of a port suitable for VLCCs to berth. This has been impossible at least for the past five years, due to a build-up in silt at the Es Sider terminal. After a recent agreement between the Libyan Seaport Authority with the US based Guidry Group foundation, US $1.5 billion will be invested for the construction of the port in Susah, in the eastern side of the country. With a natural depth of 18 meters, the port will only need to deepen by a few metres to be able to accommodate a fully loaded VLCC. This port could be utilised by neighbouring countries Sudan and Chad, which have already responded positively, as this project could support flows through the Suez Canal. 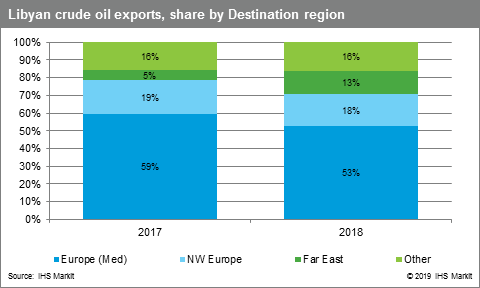 Any additions to Libya's output could easily translate into more volumes exported to countries like China and/or India, while there are still gaps to be filled across the European market, which for now seem to be satisfied by the increasing volumes coming from the US. But meanwhile, the drop in Iranian cargo coming into Europe (excluding Turkey) provides space for hope that flows on Aframaxes could pick up again any time soon.