The US economy is enjoying robust economic growth, but also suffering the steepest upward price pressures seen for a decade. The data therefore suggest consumer price inflation looks set to remain elevated, adding to the hawkish picture for US policymaking.

The October IHS Markit US PMI surveys showed steady output growth, commensurate with an annualised rate of economic growth of around 2.5-3.0%. Expectations of future business growth also spiked higher, adding to signs that the economy will enjoy a strong end to the year after already notching up strong performances in the second and third quarters. However, the good news was marred by further reports of sharply rising prices. The October PMI surveys showed average selling prices for goods and services rising at a rate only marginally below September's nine-year survey record high. 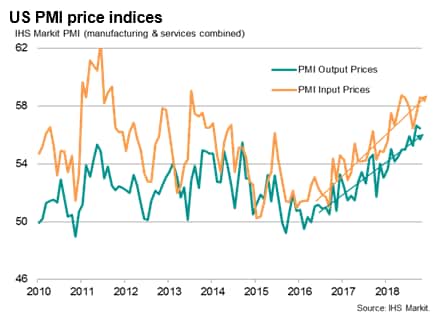 Price rises often reflected the need to pass higher costs on to customers. The overall rate of input cost inflation in October was among the highest seen since early-2011. Rising costs were most often linked to tariffs, as well as widespread shortages of many goods as demand exceeded supply.

Delivery delays, as indicated by supplier lead-times, continued to be widely reported in October, having cooled only modestly from survey record rates of supply-chain lengthening seen earlier in the year. Longer deliveries reflected heightened global demand for many key commodities, but the surveys have also found that the buying of safety stocks, in part linked to trade war concerns, have exacerbated the underlying situation of demand growing faster than supply. 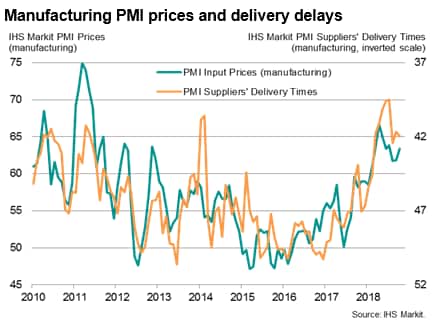 However, it is not just the prices of goods that were found to have been rising at an increased rate. Average prices charged for services have risen in the past two months at rates not previously recorded in the survey's nine-year history. Higher goods prices fed through to some service providers, but firms also noted an increasing impact from upward wage growth and higher interest rates. 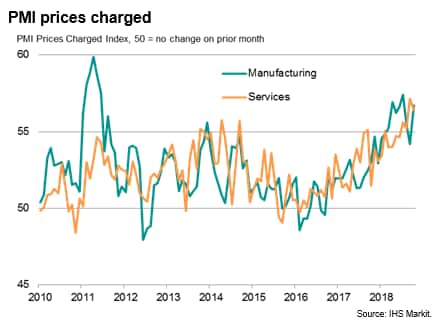 The high correlations that are observed between the PMI data and official inflation numbers mean the surveys suggest that consumer price inflation looks set to remain elevated in coming months. Over the past decade the correlation between the PMI composite input prices index (covering both manufacturing and services) with annual CPI and PCE inflation rates is 76%, with the PMI acting with a one-month lead.

Manufacturing PMI input price data show an even higher correlation of 79% with CPI, rising to 80% with PCE, again with one-month leads. 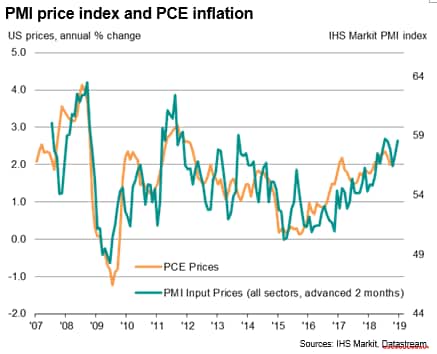 The robust economic growth indicators and elevated price series from the PMI therefore add to the hawkish picture ahead of an expected Fed rate hike in early December. However, an additional advantage of the PMI surveys from IHS Markit is the ease with which international comparisons can be made. This serves to further highlight the strength of price pressures in the US relative to other developed countries. Recent months have seen US prices charged index numbers running considerably higher than in Japan, the Eurozone and the UK (despite the latter two regions seeing higher input cost indices than the US).

This outperformance in terms of inflationary pressures underscores the relatively hawkish policy stance expected at the FOMC compared to other major central banks, which is of course of key relevance to FX markets. 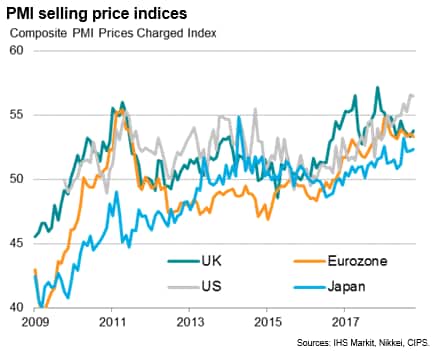