US and European growth surges as economies reopen, but Japan slides back into contraction

The US continued to drive the global economic rebound in May, according to flash PMI data from IHS Markit. Europe also saw growth accelerate. In contrast, Japan fell back into contraction amid emergency measures to curb a new wave of COVID-19 infections.

However, while the US saw the strongest expansion, it also reported by far the steepest increase in prices for goods and services. 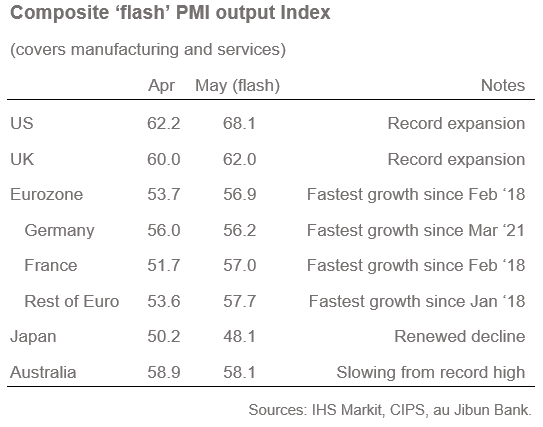 US and UK enjoy record expansions as economies rebound

Flash PMI survey data showed business activity rising strongly in the US and Europe during May as these economies continued to open up from Covid-19 related restrictions.

Growth of business activity measured across the combined manufacturing and service sectors hit record highs in both the United States and the United Kingdom. Survey data extend back to 2009 and 1998 respectively for these economies. Both saw robust manufacturing growth as factory order books were buoyed by rising global demand. These production gains were accompanied by surging service sector business activity, with a record services expansion in the US and a near-record increase in the UK. 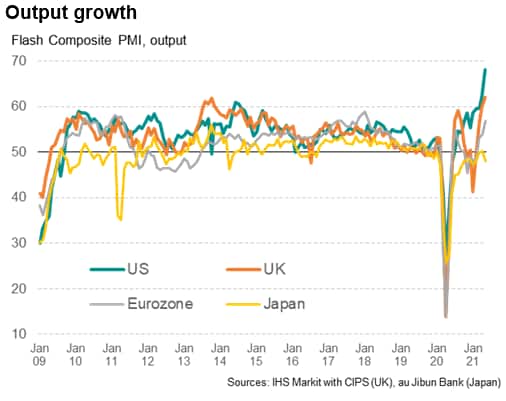 Growth also accelerated sharply in the eurozone, rising to the highest since February 2018 amid the strongest upturn in new business inflows for almost 15 years. While the recent eurozone expansion has been led by Germany, the flash PMI data showed France and the rest of the region catching up in May, and in the case of services, overtaking Germany.

The underperformance of the eurozone relative to the US and UK can be in part attributable to variances in ongoing measures to control the spread of Covid-19, but also to vaccination progress. While the UK and US have so far respectively vaccinated 54% and 47% of their populations to some degree, according to Our World in Data, vaccination rates range from 38% to 32% in the four largest eurozone economies. In particular, the survey data highlight how positive news flows from successful vaccination programmes have lifted business and consumer confidence, driving activity higher in May and turbocharging the boost from the easing of lockdown measures especially markedly in the US and UK.

Japan lags even further behind, with just 4% of its population vaccinated. Furthermore, a reimposed state of emergency across various prefectures since April that has been extended to end-May has had a direct impact on business activity. The au Jibun Bank PMI (compiled by IHS Markit) fell back into contraction in May as a result, bucking the wider trend of faster economic growth signalled in the US, UK and eurozone (and also contrasting with the near-record expansion indicted by the flash PMI for Australia). Service sector activity fell sharply in Japan while manufacturing growth slowed. 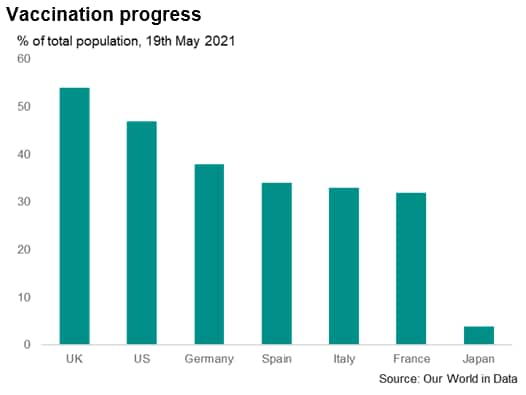 Record selling price inflation in the US and Europe

A by-product of the economic rebound is inflationary pressure, degrees of which have been directly related to the recovery speeds. In the US and Europe, supply has lagged behind the surge in demand, handing pricing power to sellers. In the US, where fiscal stimulus measures have further buoyed consumer wallets, flash PMI survey data showed a rate of increase of average prices charged for goods and services far in excess of anything previously recorded by the surveys. Selling price inflation also hit new survey highs in the UK and eurozone, albeit with service sector inflation remaining relatively subdued.

Prices in Japan meanwhile, barely rose in May with the rate of increase in fact slipping from April as sellers increasingly offered discounts to stimulate sluggish sales. 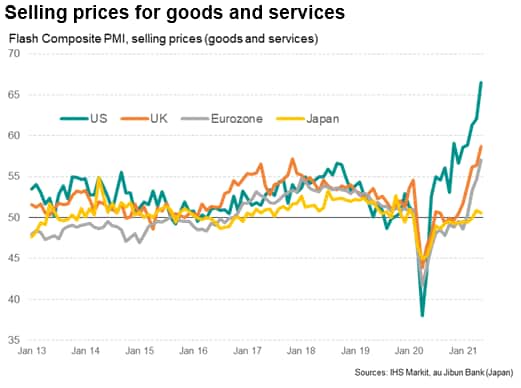 Some of the price pressures appear temporary. Companies have struggled to rebuild capacity not just in factories but also in sectors such as hospitality, citing shortages of inputs, staff and logistical support. How long these price pressures persist for will depend on how quickly supply and demand come back into balance. Leading indicators such as the PMI's suppliers' delivery times index and backlogs of work index will be important in assessing this supply and demand equation. While backlogs of work rose at a record pace across the G4 economies on average in May, the supplier delivery times index at least showed signs of peaking. 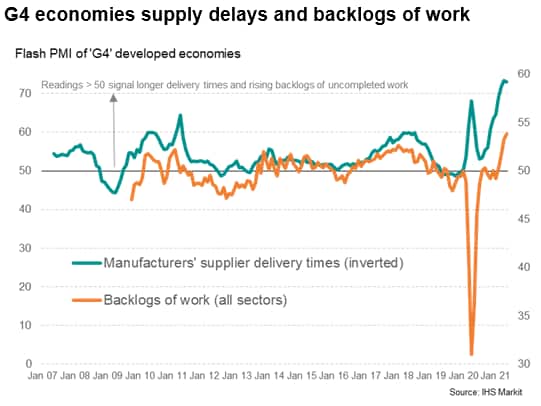