The eurozone economy suffered the steepest falls in business activity and employment ever recorded during April as a result of measures taken to contain the COVID-19 outbreak, according to provisional PMI® survey data. The month as saw unprecedented damage to the eurozone economy from lockdown measures coupled with slumping global demand and shortages of both staff and inputs.

The flash IHS Markit Eurozone Composite PMI plummeted to an all-time low of 13.5 in April, down from a prior record low of 29.7 in March, to indicate by far the largest monthly collapse in output recorded in over two decades of survey data collection. By comparison, the lowest reading seen during the global financial crisis was 36.2, reached in February 2009.

Our model, which compares the PMI with GDP but takes into account 'non-linearity' during times of extremely strong growth or decline, suggests that the April survey is indicative of the eurozone economy contracting at a quarterly rate of approximately 7.5%. 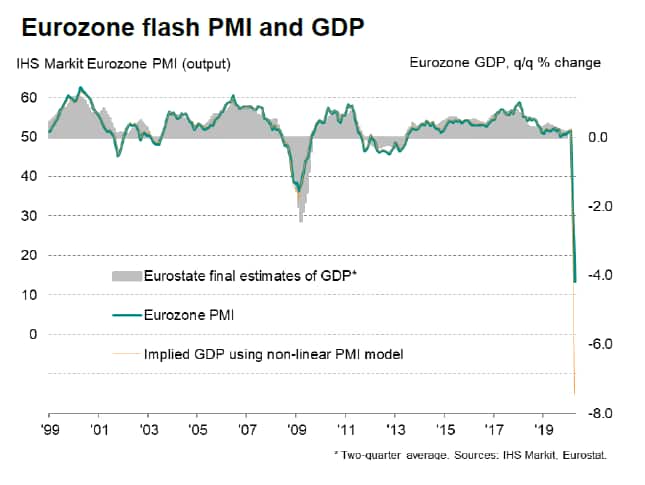 The COVID-19 pandemic was widely blamed for the deterioration, with April having seen an intensification of efforts to contain the virus outbreak across the continent. Lockdown measures included widespread temporary business closures and draconian restrictions on citizens' movement.

All-time lows in services and factories

The service sector bore the brunt of the impact from the lockdown measures, with the tertiary sector's business activity index sliding from 26.4 in March to just 11.7 in April. Companies operating in sectors such as hospitality, accommodation, restaurants, travel and tourism saw especially steep falls in activity, with vast numbers of such companies in enforced shutdowns or severely limited in terms of their ability to operate.

The fall in the services activity index is equivalent to the sector's output falling at a quarterly rate of around 5%, although the actual decline could be larger as the PMI excludes many of the self employed and retail, which have been especially hard-hit by the pandemic. 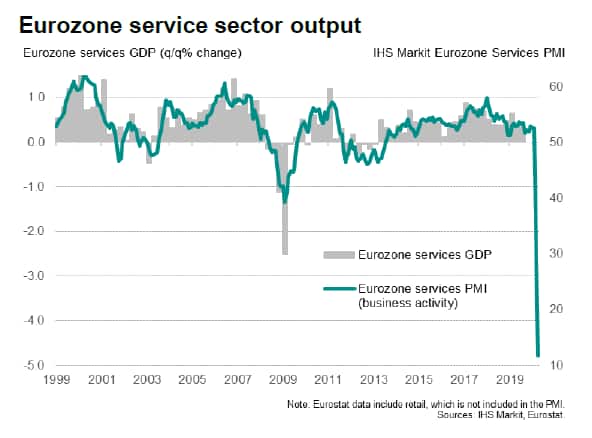 Manufacturing also saw a record fall in production, the output index slumping from 38.5 in March to 18.4, with many non-essential businesses having closed and others reporting either dramatically reduced demand or being constrained by shortages of staff and inputs. Supply chain delays hit the greatest ever reported.

Comparisons with official data indicate that the factory output index is consistent with production falling at a quarterly rate of at least 7%. 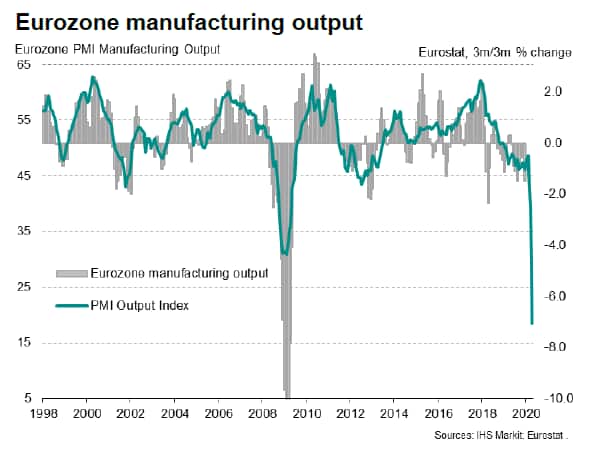 The slump in demand seen during the month was reflected in overall inflows of new business falling at the steepest rates yet recorded in both manufacturing and services, resulting in a record depletion of overall backlogs of work. An unprecedented fall in service sector backlogs was accompanied by a near all-time record reduction in manufacturing.

Expectations of output in the coming 12 months meanwhile dropped marginally below the previous low seen in March thanks to a new record degree of pessimism in manufacturing.

Jobs were meanwhile cut to the greatest extent ever recorded by the survey, dropping for a second successive month.

Service sector jobs were slashed at the steepest rate yet witnessed by the survey, while the drop in manufacturing payrolls was the sharpest since April 2009. In some cases, the employment decline reflected furloughed workers, but even if these workers are excluded the fall in employment was still among the steepest ever recorded by the survey. 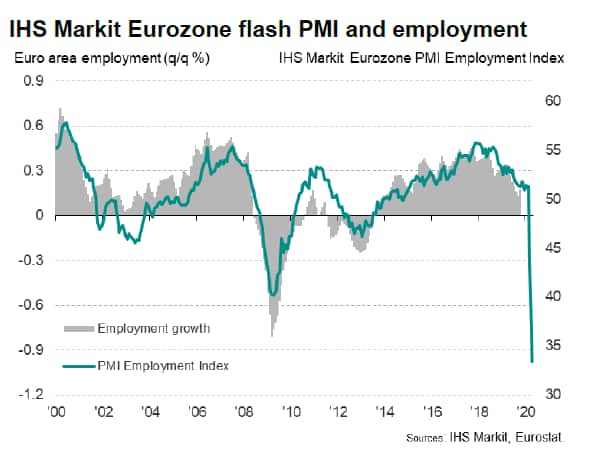 Price cuts were often facilitated by lower costs. Average input costs fell to an extent not seen since July 2009. However, while a record fall in service sector input prices was recorded, largely linked to lower payroll costs, factory input prices fell at a reduced rate (albeit remaining among the fastest since 2016), in part reflecting some upward price pressures emanating from supply shortages.

By region, the unprecedented scale of the collapse was broad-based, with composite flash PMI output indices hitting all-time lows of 17.1 and 11.2 respectively in Germany and France (down from 35.0 and 28.9 in March), while the rest of the region saw the composite PMI slide from 25.0 to 11.5. 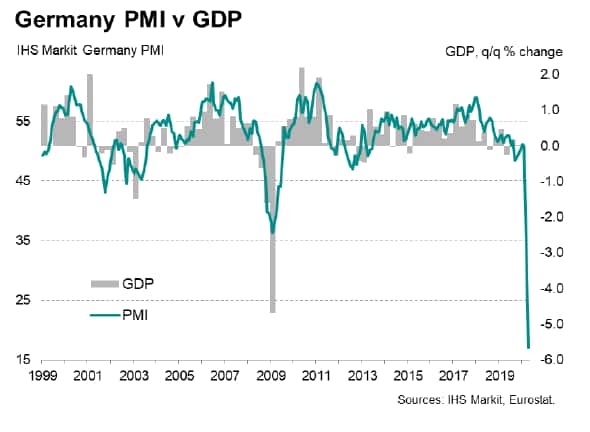 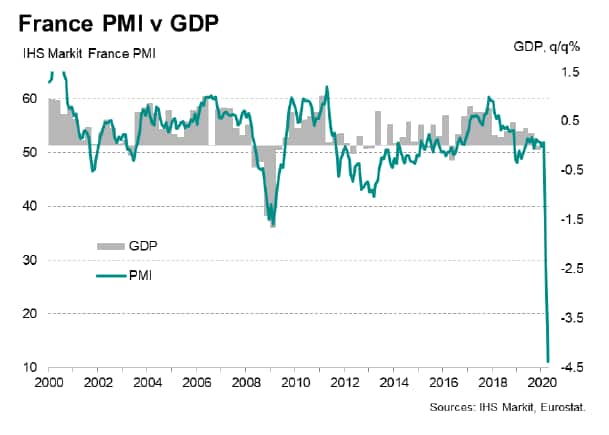