Hiring activity across the UK remained subdued in May amid lingering economic and political uncertainty, according to the latest KPMG and REC Report on Jobs data, compiled by IHS Markit. The latest recruitment industry survey showed that the number of people placed into permanent jobs fell further, while temporary staff billings rose at the weakest rate for just over six years. Recruiters report that uncertainty regarding the outlook has dampened demand for staff in recent months, while greater risk-aversion among workers is exacerbating an already low supply of candidates. 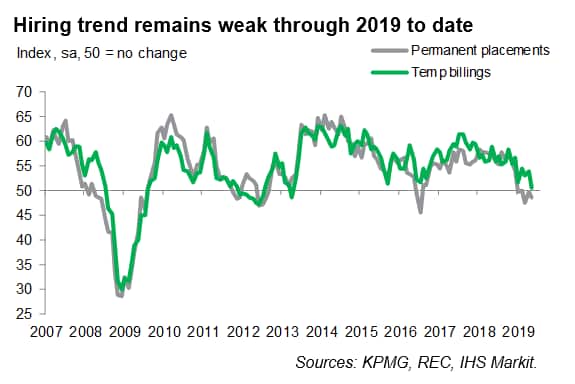 The lacklustre labour market trends seen in the Jobs report chime with the latest UK PMI survey releases, which showed the economy was broadly stagnant during May, a trend that is likely to persist as a Conservative party leadership contest gets underway and the path to Brexit remains as uncertain as ever.

The Report on Jobs survey, which monitors over 400 recruitment consultancies across the UK, provides advance signals of labour market trends. However, having signalled the current tight labour market conditions and rising pay well in advance of official ONS data, the recent survey data are now showing a notable slowdown in hiring activity compared to that seen over the past two years.

Permanent staff appointments fell modestly in May, with recruiters commonly attributing this to fewer vacancies at employers, reduced activity at clients and widespread skill shortages. Permanent placements have in fact now fallen in four of the past five months.

There had been signs of employers plugging gaps with temp workers back in April's survey, reflected in a strong rise in temp billings, but this effect appears to have faded in May, which saw only a marginal increase in temp billings that was the weakest for six years.

Digging into the latest official jobs data, the softer trends seen in the recruitment industry survey appear to be feeding through to official numbers when looking at employee jobs, vacancies and pay. The survey therefore adds to concerns that upcoming official data will not be as robust as we have seen up to 2019, as headwinds continue to build across the labour market. 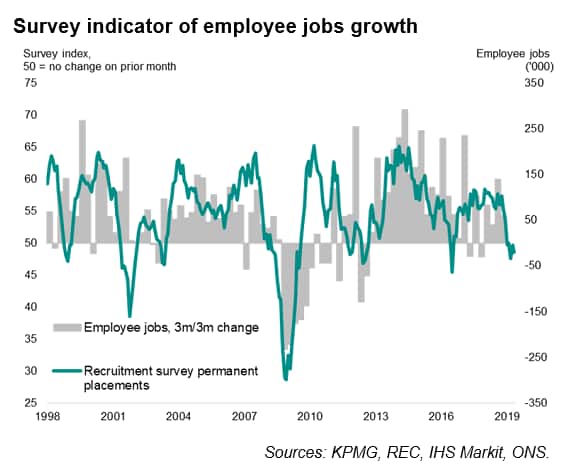 Demand for staff weakens across the board

Key to the weaker recruitment trend was a relatively muted rise in staff demand during May, with recruiters mentioning that firms had often scaled back or postponed their hiring plans. At 54.2 in May, the index measuring overall vacancies held close to April's 80-month low of 53.6 to indicate that growth of demand remains near a multi-year low.

Relatively weak demand for staff was signalled across the board, with all monitored sectors showing slower increases or outright declines in staff demand compared to 2018. Retail, Construction and Executive/Professional appear the worst hit sectors. Softer staff demand has also been evident in recent official jobs data. ONS job vacancy numbers have been edging down, dropping by 15,000 in the three months to April to 846,000 (albeit keeping close to a record high of 861,000). 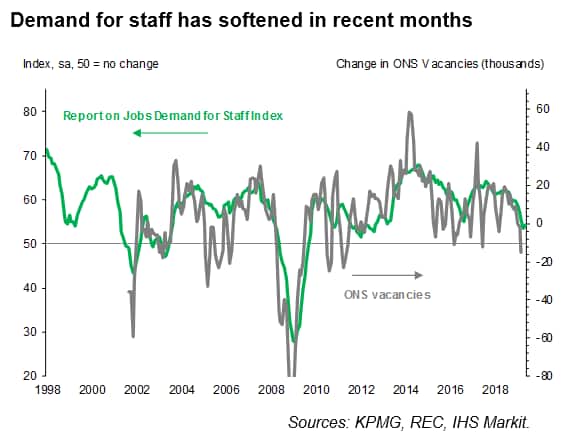 In 2018, a key reason for shrinking candidate availability was a low unemployment rate, which currently stands at 3.8%, its lowest since 1974. While shortages of suitable staff continue to weigh on candidate availability, recruiters are also increasingly citing that uncertainty is putting people off changing roles as worries over job security have intensified. Permanent staff supply continued to deteriorate at a quicker pace than that of short-term workers, but both series continue to signal that the jobs market is historically tight, and skill shortages remain widespread. 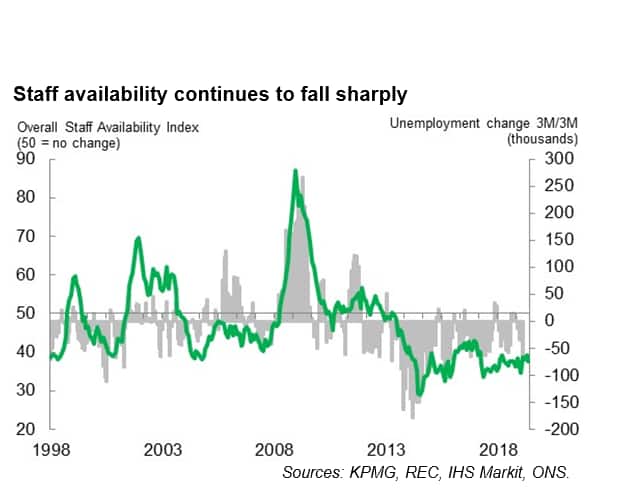 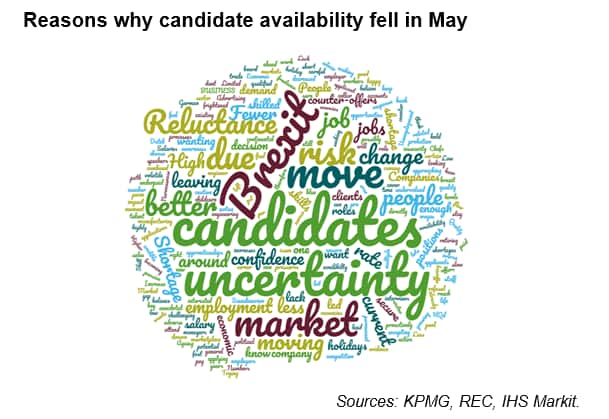 Competition for scarce candidates continued to place upward pressure on starting pay in May, though there were signs that the rate of inflation had cooled further from earlier in the year. Softer, but still strong, earnings growth was also captured by the latest ONS data, which showed Average Weekly Earnings (excluding bonuses) rising by 3.3% on the year in the three months to March, down from the recent peak of 3.5%.

The recruitment survey data show that the rate of starting salary inflation, though sharp, was the softest for just over two years in May, while temp wages rose at the quickest rate in six months. Overall, the data are consistent with official earnings growth of around 3%. 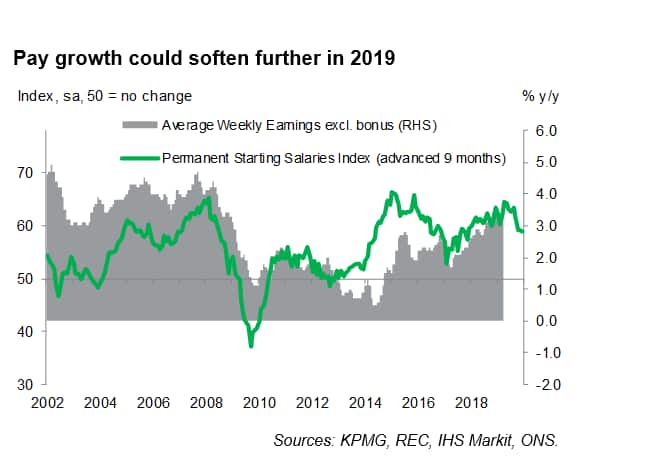 Overall, the KMPG/REC survey indicates that there is a low likelihood that hiring activity will rebound over the summer as uncertainty continues to act as a drag on all aspects of the labour market; from hiring decisions to candidate availability. The next few months will be dominated by the Tory leadership party campaign, while the UK also anticipates an exit from the EU on the 31st October, which is likely to weigh on decision-making by firms. Therefore, it seems more likely that the official labour market data could disappoint in the months ahead in terms of job creation and waning earnings growth.