The latest PMI surveys indicate that the UK economy remained close to stagnation in February, despite a flurry of activity in many sectors ahead of the UK's scheduled departure from the EU at the end of March.

The IHS Markit/CIPS 'all-sector' PMI rose from 50.3 in January to 51.4 in February. In spite of the improvement, the survey's headline indicator remains indicative of an economy close to stagnation, on course for its weakest quarterly expansion since the final three months of 2012. The PMI data so far suggest the economy will grow by just 0.1% in the first quarter. 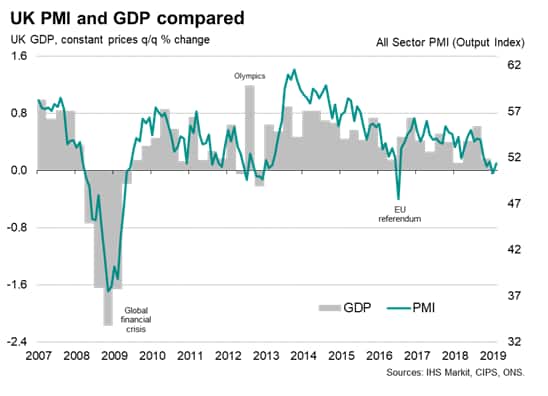 The vast service sector saw growth accelerate slightly but remained in its weakest growth spell since 2012, with the rate of expansion having cooled markedly since the middle of last year. The sector is set to only grow by approximately 0.1% in the first quarter.

Manufacturing output growth was meanwhile disappointingly modest in February given that many firms reported a short-term boost from customers stocking up ahead of potential Brexit-related disruptions or supply delays. Even with this recent fillip, comparisons with official data suggest the goods-producing sector will act as a drag on GDP in the first quarter, entering a technical recession.

However, the weakest performance was seen in construction, output of which declined in February. Comparisons of the PMI with official data indicate that the building sector could therefore also move into recession in the first quarter. 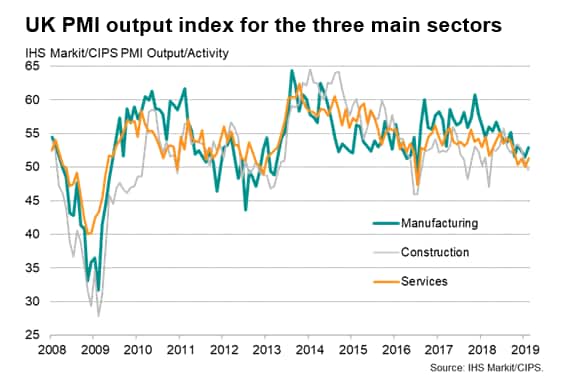 Worse may be to come. In the first instance, new orders (measured across the three sectors) fell for a second successive month in February. Although only marginal, the decline reflected a stalling of demand growth across the economy which was commonly attributed to cancelled or postponed orders due to a combination of Brexit-related changes in business trading relationships, Brexit-related uncertainty and a wider cooling of economic growth both at home and globally.

The current drop in new work indicates that businesses are in one of the worst periods of demand seen since the global financial crisis.

The lack of new work also led to a fifth successive monthly decline in backlogs of work, which is in turn indicative of excess capacity and often followed by firms cost cutting.

Looking further ahead, business optimism regarding the next 12 months has sunk to the lowest ever recorded by the survey with the exceptions of the height of the global financial crisis and July 2016. Confidence fell in all three sectors, though service sector firms were the least upbeat. Brexit concerns dominated the list of reasons cited by companies for deteriorating business performance by a wide margin.

With excess capacity developing amid a lack of new work and prospects growing gloomier, job losses accelerated in February. Employment across services, manufacturing and construction fell at a rate not exceeded for nine years as companies cut costs and awaited clarity on the outlook. 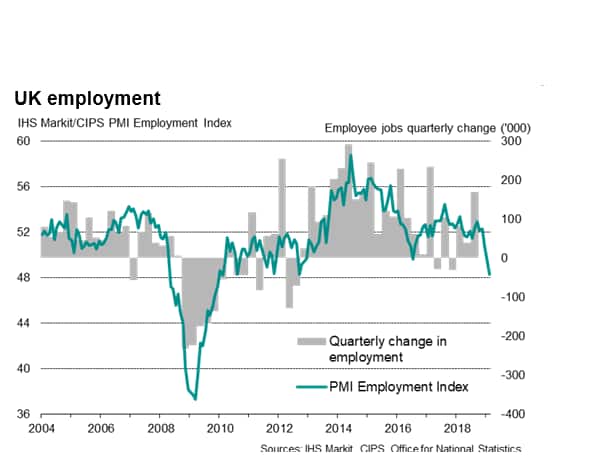 One piece of good news from the February PMI surveys was a cooling of price pressures. Input costs measured across the three sectors rose at the joint-slowest rate for two-and-a-half years, often linked to lower oil prices as well as a general wider moderation of global commodity prices. The rate of increase of average selling prices for goods and services meanwhile also eased, dipping to the lowest since June 2017.

The drop in the PMI's price gauges bode well for consumer price inflation to fall further below the 1.8% annual rate seen in January. 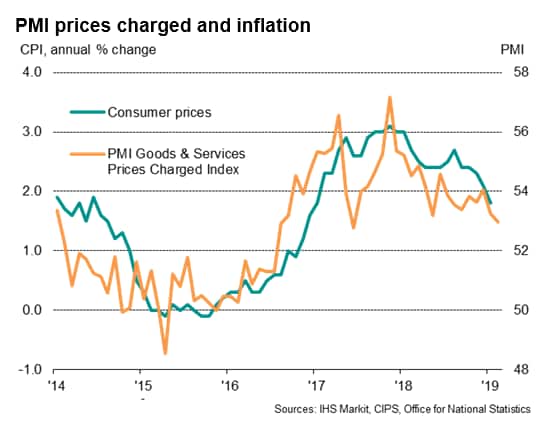 The headline PMI is already in territory that would normally be associated with a dovish policy bias from the Bank of England, and the weak forward-looking indicators underscore an increased risk of recession. 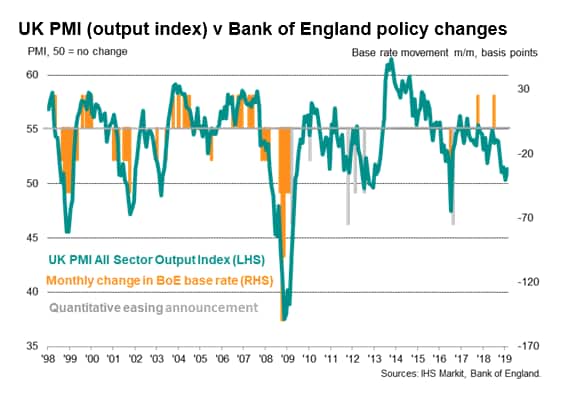 The concern is that, in addition to spending and investment decisions being disrupted by Brexit, pre-Brexit preparatory activities are likely to move into reverse after the UK leaves the EU. Many Brexit-related headwinds and uncertainties also look set to linger in coming months even in the case of PM May's deal going through.

The steep deterioration in the PMI's employment index meanwhile also suggests the hitherto largely-resilient UK labour market has started to turn down, which will impact household confidence and spending, and likely curb wage growth.

In this context, with the economy close to stalling in the first quarter and headwinds likely to persist, the current consensus forecast for the UK economy to grow 1.4% in 2019 (already revised down from 1.5% in January) could prove overly optimistic.