October data from the Accenture/IHS Markit UK Business Outlook survey - a tri-annual survey based on a panel of around 1,300 companies in the manufacturing and services sectors - indicated that UK businesses remained confident of a recovery in activity over the coming 12 months, but there was a steep loss of momentum from earlier in the year.

More than half of UK private sector firms (56%) expect an increase in business activity during the year ahead, compared to 11% that project a decline. Whilst falling sharply from the level seen in the summer to a 12-month low, the resulting net balance of +45% was higher than seen throughout much of the last six years. 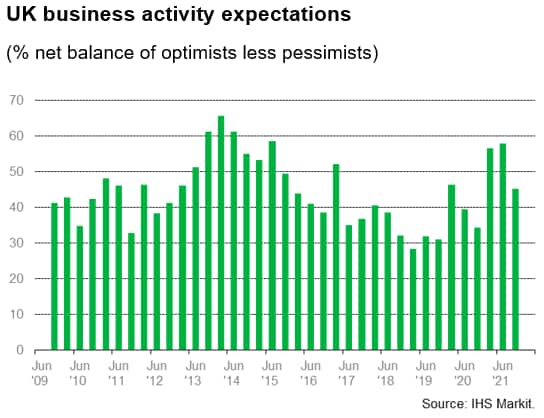 UK businesses remained more confident than most other countries covered by the Business Outlook survey in October. The net balance was higher than seen in both the EU (+38%) and worldwide (+33%).

Confidence was underpinned by expectations that demand will continue its recovery to pre-pandemic levels, while a rebound in international travel and growth in new export markets after lockdown restrictions were also forecast.

That said, there were a wide range of factors that reportedly threaten the overall recovery, notably including fears that rising inflation will undermine demand. Higher energy costs, wages, raw material prices and transport charges were all mentioned as likely drivers of inflation over the next 12 months.

The net balance of firms expecting non-staff costs to increase over the coming year rose to +66% in October, up from a previous record high of +55% during June. This reading was also far higher than seen globally (+33%), with Germany (+67%) the only nation monitored to post above the UK.

Staff cost expectations were also at a record high at the start of the fourth quarter, hinting at accelerating wage growth. Over three-quarters of UK firms projected a rise in salaries compared to just 2% that expect a decline. The net balance of +75% was up from +70% in June and the highest seen worldwide.

Supply shortages were cited as a key risk to both growth and inflation, with manufacturers finding that the poor availability of certain goods had constrained production volumes and was likely to lead to further challenges. That said, some firms highlighted increased efforts to re-shore supply chains as a result of disrupted shipping lines and Brexit, which respondents suggested could benefit domestic businesses in the long term.

With inflation expectations at record levels, UK companies widely forecast that their output charges would rise in tandem with input costs over the next 12 months. The net balance of companies expecting to raise their selling prices ticked higher for the fourth survey in a row to a record high of +56%. 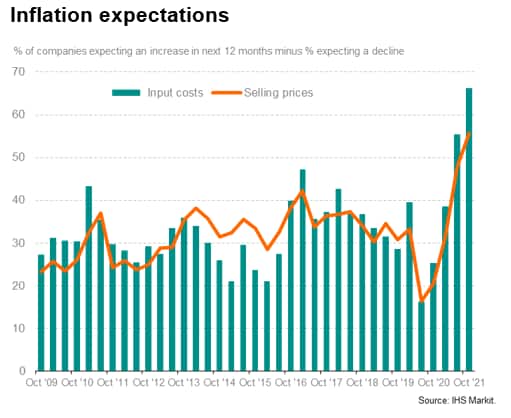 Despite the anticipated uplift in selling prices, businesses were less confident that profits will also increase, with many predicting that cost pressures are likely to outstrip price increases. The respective net balance of +16% was less than half that recorded in both the February and June survey periods. 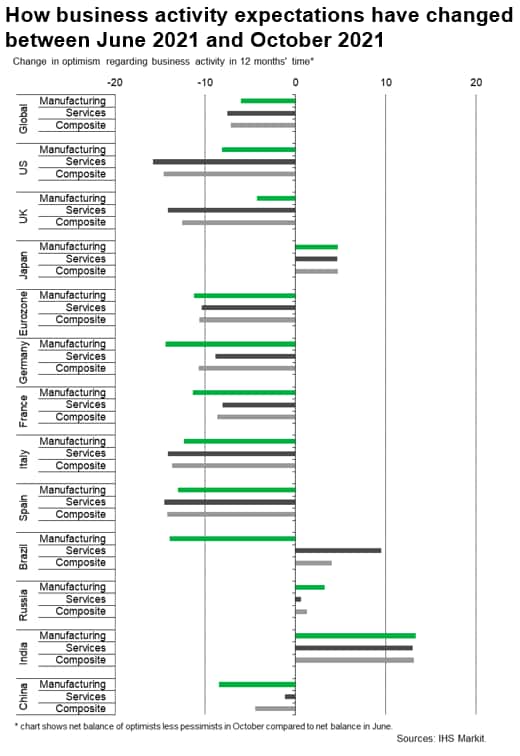