It is neither the best nor the worst of times for securities lending, which means there is the opportunity for movement in either direction as we look ahead to 2020. Before we turn the page, however, we review the year that was 2019. At the end of 2018, things looked rather bleak for capital markets and securities lending revenues were soft given the decline in asset values which reduced loan balances. That makes Q4 2018 a relatively easy YoY comp, which Q4 2019 improved on by 3.8% with $2.4bn in revenues. That put the total for 2019 at $10.1bn, a decline of 6.3% relative to 2018. While the yearly revenue comparison is less favourable, the underperformance was primarily concentrated in the first half of the year. 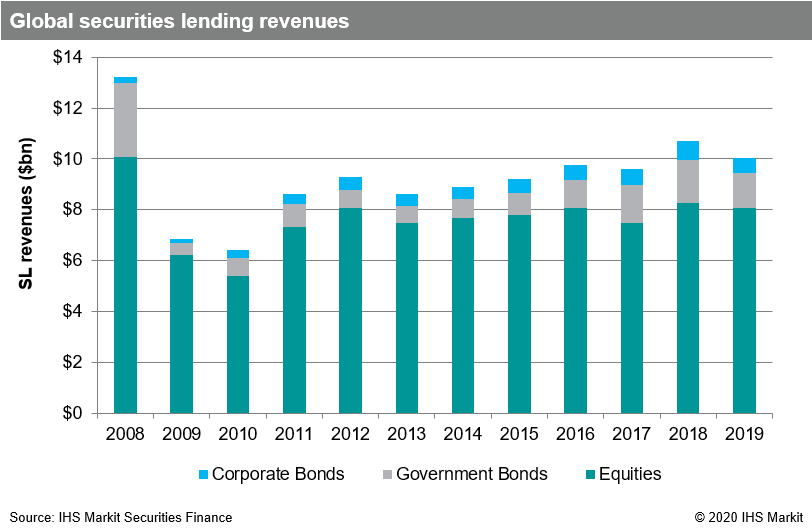 It was a mixed year to say the least for equity lending revenues. North American equities were the stand-out, led by recent IPOs and Cannabis related firms. The impact of Cannabis was such that 2019 was the best year on record for Canada equity lending, with revenues jumping 30% YoY. That joy was not widely distributed - excluding the impact of Cannabis CA equity, revenue was down 25% YoY. In the US, revenues were similarly concentrated in relatively few equities, which really didn't take off until Q3. For the first half of the year, US equity revenue was down 18%, however based on surging fees for Beyond Meat and some other recent IPOs in Q3, revenues were up 11% for the year. The YoY outperformance for NA equities was greater in Q4 than in Q3 (49% versus 43% respectively), however that was owing to the easy comp in Q4 as NA equity revenues fell 14% sequentially. It's also important to note the significance of corporate action related trades, particularly exchange offers. In Q1, the Eli Lilly exchange offer made LLY shares the most revenue generating for the quarter. In Q4, Danaher Corp was the most revenue generating US equity as a result of its exchange offer for shares of Envista.

It was a challenging year for deriving lending revenue from EU equities, with each quarter seeing a YoY decline and the total revenue of $1.7bn reflecting a 20% YoY decline. That makes 2019 the lowest revenue observed for EU equities in the last decade. There were some opportunities to generate significant lending returns such as Casino Guichard in France and a few UK firms relating to concern over Brexit. The overall trend was toward lower balances, -17% YoY, as well as lower fees, -3% YoY.

Asia equity lending revenues declined by 8.7% YoY, with only Q1 posting a gain relative to 2018. The general theme was decreased hard to borrow loan balances in EM markets set against increasing balances in the lower fee developed markets, most notably Japan but also including Australia. One stand-out against the broader trend was South Korean pharmaceutical firm HLB Inc, which delivered $38m in Q4 revenues as the share price and lending fees surged while shares on loan remained constant. South Korean equity revenues increased 4.4% YoY to $130m, of which 29% was from lending shares of HLB. 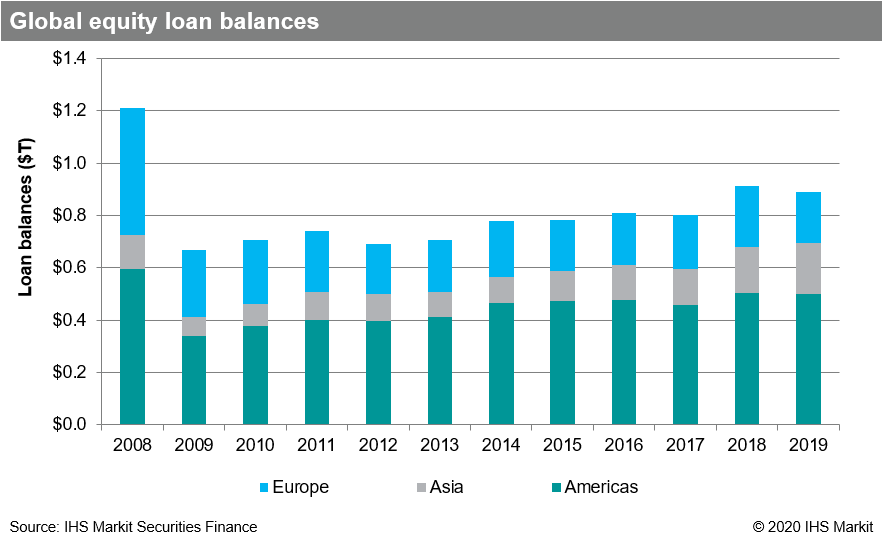 Corporate bond lending revenues continue the slide from the post-crisis peak in Q2 2018. That comes mainly as the result of lower fees as balances were essentially flat YOY, -0.7%, while fees declined 17%. There were some opportunities to generate lending returns, for example the energy and opioid related issuers, however the strong performance of the credit market and increase in lendable assets kept a lid on overall revenues. The $604m in corporate bond lending revenues reflects a decline of 17% YoY, though it's worth noting that 2018 was the best year on record, with 2017 and then 2019 ranking 2nd and 3rd most, respectively.

Government bond lending revenues continued the slide from post-crisis peak revenues in Q1 2018. The narrative in the latter portion of 2019 concerned more the funding of long positions in a function similar to the repo market. The spike in UST repo funding costs on September 17th spilled over into securities lending, as the rebate for cash collateralized funding transactions increased to more than 400bps. Subsequent accommodation by the Federal Reserve precluded similar funding stress at year-end. With increased issuance of US Treasuries, and increased holdings on broker-dealer balance sheets, the need to borrow in HQLA assets has declined, putting pressure on revenues from traditional securities loans. As such, US government bond lending revenues fell by 20% YoY, with ex-US government bond revenues falling 21%.

Part of the narrative in recent years has been the push towards efficiency on the part of broker-dealers, which has resulted in greater amounts of broker-to-broker loans and internalized borrows. There has also been an increased presence on the part of retail brokers, in part the result of fully paid lending programs for retail investors gaining popularity. These sources of lendable assets have reduced the demand for the traditional agency lending model; we see revenues from agency lending down 12.6% YoY in 2019. These additional sources of borrow have added market share, however most securities loans still come through the agency pipeline. The pressure on agency utilizations, along with a mandated lack of collateral flexibility for some beneficial owners, has caused a general shift in focus toward intrinsic value lending. The resulting increase in fee level and volatility for hard to borrow securities has in turn challenged borrowers. Hedge fund frustration with borrow cost variability has led to an increased use of synthetic products. In theory, those products would be hedged in the underlying, however there is also the possibility of hedging synthetically as well. A consideration of securities lending revenues is therefore incomplete if it excludes the growing alternative sources of lendable assets.

With the opportunities and challenges of 2019 in the rear view, the future looks bright for securities lending. There has been an emerging dialogue on corporate governance which is vital to beneficial owners, though it's worth noting that agents have actively managed lendable assets around corporate action record dates over the last decade per academic research, so it's still important, but not new. The increase in lendable assets continues, largely as the result of asset appreciation though there has also been a consistent increase in accounts reporting to IHS Markit since the low point in 2013.

From 2008, the high point in securities lending revenue, to the low point in 2010, and up to the present much has changed and yet the core remains: The generation of lending revenues by beneficial owners, the funding of securities by asset owners and the provision of borrow to short sellers. Here's to another decade of growth and prosperity for all capital market participants!

Looking to enhance your underwriting, manage risk, and position yourself for growth? Power your insurance workflow… https://t.co/oDlRYCHagB