The Japanese private sector reported a sharp deterioration in business conditions during August, with rising COVID-19 cases across the country and subsequent economic restrictions contributing to the fastest fall in activity for a year. The resurgence of caseloads linked to the Delta variant of the virus overshadowed any purported economic boost from the Tokyo Olympic Games, which were already heavily disrupted and scaled back by the pandemic.

The au Jibun Bank Japan Composite PMI, compiled by IHS Markit, indicated Japan's private sector contracted for the fourth consecutive month in August. The PMI's Composite Output Index dropped from 48.8 in July to 45.5 in August, pointing to the fastest fall in private sector output since a year prior. The contraction was led by the fastest reduction in services activity for 15 months, alongside a softening in the rate of increase in manufacturing production. 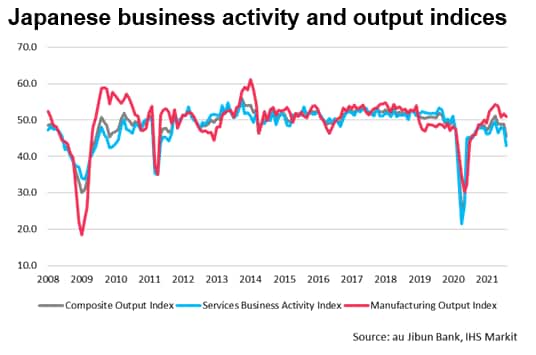 A sharp rise in COVID-19 cases ahead of the start of the Tokyo Olympics led to the Japanese capital being placed under emergency restrictions for the fourth time, forcing the marquee event to be held without spectators. Moreover, the most recent surge, linked to the more infectious Delta variant, was widespread in Japan, which forced the state of emergency to be extended to cover approximately 80% of the population including other major cities such as Kyoto and Hokkaido. The measures were recently extended in early September to last the rest of month. Though comparatively low overall, the level of containment measures in place in Japan were among the most stringent of the monitored economies, second only to India. 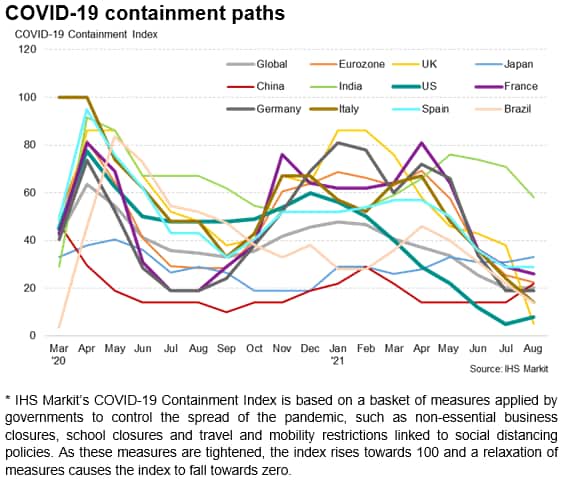 The strain from the ongoing pandemic on the Japanese economy was apparent in August, notably on the service sector. Service sector firms reported a nineteenth consecutive monthly contraction of both business activity and demand, with the former falling at the fastest pace in a year. At the same time, the level of incoming business fell at the quickest rate since May 2020, as firms and their customers readjusted to operating under stricter state of emergency measures.

Stricter pandemic restrictions across South East Asia due to elevated infection rates exacerbated ongoing supply chain issues in August. This contributed to softer growth of the Japanese manufacturing sector to its lowest during its current seven-month series of expansion. There was also a more pronounced slowdown in new order intakes among manufacturers, as the seasonally adjusted New Orders Index reached its lowest since the start of 2021.

Survey respondents often highlighted that dampened operating conditions were the result of ongoing supply chain disruption, often commenting on a lack of raw material availability and delays in receiving inputs in a timely manner. Suppliers' delivery times - a widely used indicator of supply delays and capacity constraints - deteriorated to the greatest extent since the 2011 earthquake and tsunami, where Japanese supply chains were severely disrupted.

Despite the lack of a boost from the Tokyo Olympics, confidence about the outlook for Japanese private sector remained strong in August by historical standards, although sentiment across both the manufacturing and services sectors did ease to the lowest points since January.

Optimism was underpinned by hopes that the accelerating vaccination programme would stimulate a broad-based recovery in demand conditions. Latest government figures place the vaccine rollout on track to match the fully vaccinated rate to the same level of the US by the end of September, with a target of November for 80% of the population to be fully inoculated against the disease. 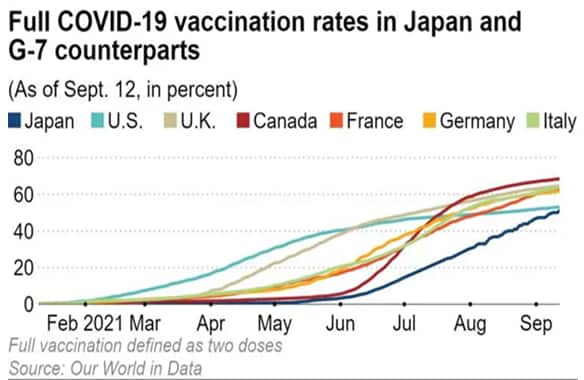 However, risks remain skewed to the downside, as restrictions covering just under half of Japan's 47 prefectures are scheduled to remain in place until the end of September. Japanese private sector firms remained wary regarding the continued impact further waves of the pandemic may have, as well as the risks associated with ongoing supply chain disruptions, particularly on the manufacturing sector.

The next au Jibun Flash Composite PMI is scheduled to be published on 24th September and will provide an early insight into the impact of current restrictions on the Japanese economy following the conclusion of the Olympics.