Recessions come in many forms and it is self-evident the current downturn is quite different from the slump in 2008-2009. But economic history is emphatic that financial crises - whether the cause or a by-product of recessions - result in far weaker and longer recoveries than "normal". So European policymakers are correct in taking measures that prevent bank frailty accentuating the effects of the pandemic-induced fall in "real" economic activity.

We will see the impact of those measures as Q2 results start to trickle in over the coming weeks. As well as the "quick fix" to the Capital Requirements Regulation and a variety of measure that should dampen increases in credit and market risk charges, the EU also gave some relief on Prudent Valuation. The legislation passed into law just before the crucial June 30 date (Prudent Valuation is calculated at quarter-end). The European Parliament and European Council decided not to use the full three month scrutiny period, which proved crucial is hastening the approval process. The EBA amendment increased the aggregation factor from 50% to 66%, which will decrease overall Additional Valuation Adjustments all else being equal.

But the key determinants of Prudent Valuation - dispersion around mid levels and the bid-ask spreads for Market Price Uncertainty and Close Out Cost AVAs - are not static. On the contrary, they have changed dramatically during the first half of the year.

Take the CDS market, for example. From the start of the year until mid-February, spreads were range bound at relatively tight levels. The dispersion of the market - as measured by min/max ranges on market-making contributions to IHS Markit's pricing service - was also relatively low.

But the onset of the pandemic in February and March had a material impact on price formation, and this was reflected in an increase in dispersion as spreads widened sharply. This was evident across the curve but particularly at the short- and long-end, as seen in the chart above.

Central bank intervention made a decisive contribution to arresting liquidity issues, and the market rallied strongly from late March. Spread dispersion also started to recover, though it took until June month-end for it to revert to pre-crisis levels. 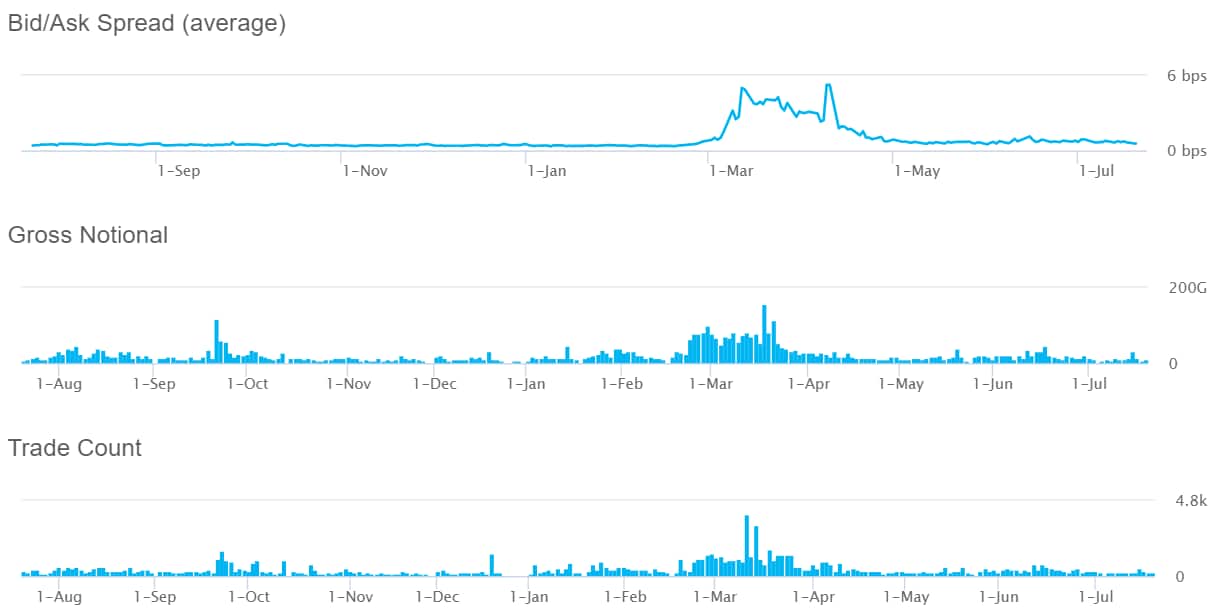 We can see that bid-ask spreads in the IHS Markit CDX.NA.IG index - perhaps the most liquid CDS instrument - took some time to revert to normal. At the peak of the crisis the bid-ask spread was 5bps, a dramatic increase from the 0.4bps immediately prior to the stressed period. It stayed at historically elevated levels before gradually compressing and is now around 0.5bps. The mean reversion is not as strong in single name CDS. The weaker liquidity in this segment of the market is contributing to a stubbornly large skew in the index (negative skew means single names trading wider the index).

Perhaps volatility, or lack of, is the driving factor behind spread dispersion. The scale of the market oscillations in March certainly match the feverish commentary over this period. The investment grade VolX indices, which track realised volatility in the CDX and iTraxx, exceeded levels seen in the eurozone sovereign debt crisis and, in the case of CDX, the Great Financial Crisis. But June and July were relatively calm as spreads settled in a tight range and 20-day volatility is now at unremarkable levels.

The volatility, of course, benefitted the Q1 earnings of banks with significant trading divisions and helped offset some of the damage done by higher loan loss provisions. We can expect more the same in Q2 if results in the US are replicated in Europe.

But buried in the banking results will be effects of Prudent Valuation regulatory relief. The increase in the aggregation factor, combined with the shrinking spread and price dispersion, should result in significantly smaller Additional Valuation Adjustments in Q2 compared to Q1. The impact may be relatively small compared to other alleviating measures (see EBA paper) but it still preserves CET1 capital and will continue to help banks throughout this year (the relief is due to expire on December 31). Financial markets are at a delicate juncture and it would be no surprise to see volatility - and dispersion - return once again.

After a meeting in Brussels, EU energy ministers are apparently close to agreeing on the terms of a gas price cap —… https://t.co/Q7vWVEQdbs

A look ahead to the key strategic trends in world trade expected through 2023 and beyond. https://t.co/yYdcGmXJAh https://t.co/skXmH2eC17