Companies doing business in Argentina, Brazil, and Venezuela face a range of business risks stemming from, among other factors, stubbornly high inflation rates. 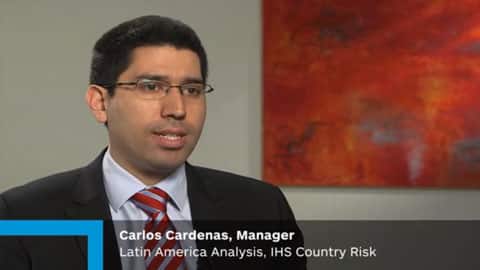 What is the business environment for companies that have an interest in Argentina?

We think that companies operating in Argentina are very likely to face a complicated political and economic environment in 2014 and 2015. Argentina is a country that is experiencing an inflation rate that is close to 40 percent. The economy will go into recession in 2014 and 2015. And on top of that, since 2011 international reserves have decreased significantly. Companies that operate in Argentina, there for, will operate in an environment in which the government will seek to impose price controls, particularly in the food sector, high levels of protectionism, and high levels of industrial and civil unrest.

The unions in Argentina play a key role, and we expect that next year in 2015, when there are presidential elections, the unions will very likely increase industrial action efforts to demand salary increases above the unofficial inflation rate. The President at the moment, President Fernandez de Kirchner, has made some moves to address the economic crisis. In early 2014, she devalued the currency and increased interest rates. She also reached an agreement for the compensation of Repsol, regarding the extrication of YPF, and somehow started to talk again to the IMF.

However, we think that the President is more concentrated on protecting the legacy of what they call the Kirchnerism economic model, and their focus on containing the crisis so that the next government that is elected in 2015 implements harsh adjustment policies.

What are the key risks for foreign investors in Venezuela?

Companies that operate in Venezuela are likely to face rising political instability risks, rising non-payment risks, and rising currency risks. President Maduro, who took office in 2013, is struggling to follow the footsteps of President Chávez. He’s facing a crisis in the economic front with rising inflation almost close to 60 percent, shortages of food products, and also a rising insecurity. The President is struggling to contain the different factions of the ruling party. And because of this, we believe, he’s struggling to take the country into a clear policy path.

His government has, so far, been categorized by improvisation and this is creating different conditions and different norms for companies that operate in Venezuela. A clear example of that is the exchange rate system, which the government has changed many times, and companies are currently facing frequent changes in the way they require access to foreign currency.

On top of that, you have the country facing a liquidity crisis. International reserves have decreased significantly, covering a less than 1.5 months of import. Because of the scarcity of foreign currency, companies that operate there are finding it more and more difficult to access foreign currency either to import or to repatriate profits. The time that it takes for companies to obtain foreign currency has actually increased, and the government has become more discretionary in terms of the allocation of foreign currency.

On top of that, because of the high inflation rate, higher levels of crime, and also the intensity…intensification of the food shortages, the country is facing its highest wave of civil unrest in decades. President Maduro is finding it difficult to contain the rising anti-government discontent and we are seeing more and more protests against the government on the streets.

What challenges will companies likely face when investing in Brazil?

Brazil at the moment appears to have lost its shine. It’s a country that’s very comfortable in terms of its external position, but the economy is growing significantly less then what it did prior to the financial crisis, and it’s not reaching those levels that foreign investors expected, which is closer to five or six percent of GDP.

2014 will be a big year for Brazil. The country will be hosting the World Cup in the summer and there will be presidential elections later in October. At the moment President Dilma Rousseff is the main front-runner. We think that she has all the power of the state behind her and at the moment is a favorite to win the elections. None-the-less, her popularity is decreasing. The candidates from the opposition are gaining more and more popularity. And for her the containment of inflation and trying to transfer all the benefits that the Brazilian economy has gained over the past years into health, education, and infrastructure, will be key.

One key thing to consider is that Brazil offers greater opportunities for foreign investment compared to Venezuela or Argentina. The country is more stable and it has a big infrastructure budget in the growth acceleration program, which is over 500 billion dollars. The thing, however, for foreign investors to understand, is that the government of Brazil is highly nationalistic. It will always prioritize the national champions, the big Brazilian companies; it will always prioritize high levels of local content. And if you want to base your operations in Brazil, you better set up a factory or your manufacturing facilities in Brazil, because if not it will be highly expensive to sell in the county because of the high import tariffs that they apply on foreign goods.