February PMI data pointed to the global economy recovering as the Omicron wave faded, though this was prior to various significant developments including the Ukraine invasion and recent lockdowns in China amid the worsening COVID-19 conditions. March PMI data will therefore be scrutinised for the impact of these events on various economic metrics such as output, supply chains, prices and upon the sole sentiment PMI sub-index - the future output index.

The global economy expanded for a twentieth straight month in February, according to the JPMorgan Global PMI™ (compiled by IHS Markit, now part of S&P Global). The rate of expansion accelerated from January's 18-month low, with the PMI rising from 51.1 to 53.4 in February, which was a level broadly indicative of global GDP growing at an annualised rate of just over 3% in February. Services led the rebound while manufacturing output likewise improved in February. 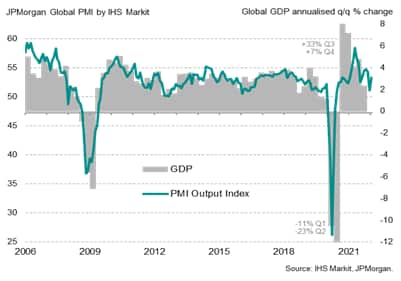 However, this was prior to various major developments in the global economy, placing the focus on March PMI for the earliest indication of how economic conditions had fared in what is a significantly different climate when compared to February.

Since the eruption of the Ukraine crisis on February 24, commodity prices have exhibited heightened volatility. Our Materials Prices Index (MPI) jumped by 8% in the first week of March, the largest weekly increase on record. Brent crude oil prices meanwhile spiked to the highest since 2008 in early March at above $130 per barrel, although some easing of the price pressures has been seen in recent days.

Given the importance of energy prices for both goods and services providers alike, the impact on input costs for firms - and how this may be feeding through to selling prices - will be scrutinised. Global selling prices had already been climbing at a severe rate in February, reflecting existing supply bottleneck issues, recovering demand and COVID-19 related effects, signalling the continuation of elevated consumer price inflation which also carries implications for monetary policy.

Flash PMIs released in the coming week on March 24, will therefore shed light on changes in pace of price inflation. Divergences may well appear, as the eurozone is expected to be hit especially hard by the Ukraine crisis given the trade links, but signs of persistent or accelerating price pressures are also possible in the UK, US and APAC countries such as Japan and Australia in March.

Effect of the Ukraine crisis on eurozone output

Disruptions to trade and financial flows owing to the Russia-Ukraine conflict are expected to hamper eurozone growth in March, which could show up in the PMI numbers. This is on the back of imposition of stringent restrictions on exports and some import restrictions upon Russia. Given the export of key commodities of oil and gas by Russia to the likes of EU and the UK, the abovementioned transmission channel of higher energy prices and potential supply constraints, higher costs may also act as speed bumps for eurozone output growth going forward.

The degree to which different constituent countries and sectors are affected may well vary, one which the country and Europe sector PMI figures will help to decipher with the March releases. As it is, the US, UK and eurozone exhibited strong recoveries in output growth in February, but the trend from here will be less certain. Meanwhile, amid the surge in COVID-19 cases in mainland China, whereby daily cases have risen to the highest in two years, stricter restrictions have been imposed across the Jilin province and China's key technology hub, Shenzhen. These new developments in China have been set against a backdrop whereby manufacturing production had only recently stabilised in February according to the PMI survey data produced for Caixin by IHS Markit, now part of S&P Global, and firms also reported lower employment levels. Following the recent tightening of movement restrictions, the ensuing impact on manufacturing in mainland China will be in focus. The extents to which output growth and employment is affected are the key topics of interest here, and likewise will be important to consider for policy implications after authorities recently set an ambitious target of around 5.5% GDP growth for 2022. With production halts already reported to have spread across various multi-national companies operating in mainland China, including Apple and car producers such as Toyota and Volkswagen, the flash PMI data for the US, Europe, Japan and Australia will be scoured for signs of fresh supply chain disruptions emanating from such production halts. Over in Hong Kong SAR, March figures will also provide an update on economic conditions with the current COVID-19 wave yet to pass its peak mid-March. Hong Kong equities have been severely impacted in recent weeks as a result of the negative developments, which saw the Hang Seng Index plunging to the lowest close since February 2016. Strong equity market correlations with the Hong Kong SAR PMI suggest that further downsides should not be ruled out with any indications of a further plunge in the PMI in March. 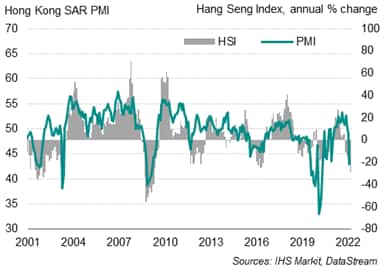 Global business optimism had been at a decade-high prior to the invasion of Ukraine according to the only sentiment-based PMI sub-index, the future output expectations index. This was across both the manufacturing and service sectors as the easing of the COVID-19 Omicron wave lifted optimism amongst firms. As told, that was prior to the Ukraine invasion and lockdowns in mainland China, which may well prelude further supply chain issues. Fresh updates on changes to business sentiment following recent developments will be closely watched with the sub-index seen to be useful in the forecasting the month ahead headline PMI in various cases. 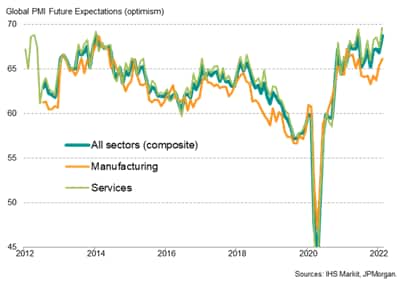