The Philippines economy has continued to show rapid expansion in early 2022, with first quarter GDP growth up 8.3% year-on-year (y/y). This followed a GDP growth rebound of 5.6% in 2021, despite the negative impact of the COVID-19 Delta wave that hit the nation in the second half of 2021. However, the Philippines is facing external headwinds from rising world inflation, notably from higher world oil prices, as well as moderating global economic growth. As the Fed and ECB tighten monetary policy due to rising inflation pressures, this is expected to result in weakening growth momentum in the US and EU, which will also act as a drag on growth for the Philippines' export sector.

Over the decade ahead, rapid economic growth is forecast for the Philippines economy. By 2033 the Philippines is set to join the ranks of a small group of countries in the Asia-Pacific region that have a GDP exceeding one trillion dollars. This will result in a significant transformation of the structure of the Philippines economy, with substantial expansion in the size of the domestic consumer market. This will help to drive foreign direct investment inflows into the Philippines, as multinationals build up their local presence in a wide range of manufacturing and service sector industries. 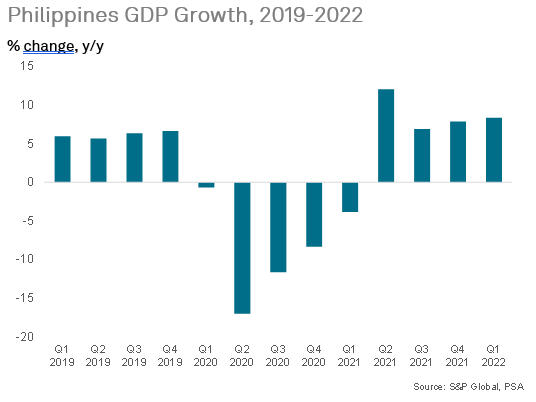 The Philippines economy has shown strong growth momentum in early 2022, with GDP growth rising to 8.3% year-on-year (y/y) in the first quarter of 2022. The easing of domestic COVID-19 restrictions allowed the rebound of household consumption spending, which helped to drive strong economic growth. Household consumption expenditure grew by 10.1% y/y in the first quarter of 2022, while gross capital formation rose by 20% y/y.

The S&P Global Philippines Manufacturing PMI® continued to show strong expansion in May, at 54.1, similar to the 54.3 reading in April. The latest headline index reading signaled a sustained positive growth momentum across the manufacturing sector, at a pace that was the second fastest since November 2018.

Production volumes and intakes of new orders grew at solid rates, helped by strengthening domestic demand. The ongoing COVID-19 recovery and the relaxation of the pandemic restrictions in the Philippines resulted in improved domestic demand conditions, according to panellists. 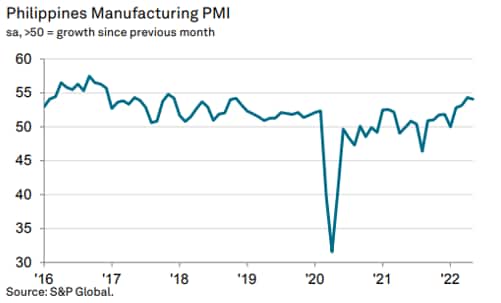 Companies surveyed regarding the 12-month outlook for output indicated expectations of expansionary conditions. Easing COVID-19 containment measures underpinned business confidence, with forecasts of stronger demand conditions and rising output in the coming months. Firms remained upbeat amid hopes of a further expansion in production and greater client demand in the coming 12 months.

Despite the global headwinds due to the impact of the Russia-Ukraine war and also the slowdown in mainland China, merchandise exports have been resilient during the first four months of 2022, showing growth of 8.9% y/y in value terms. 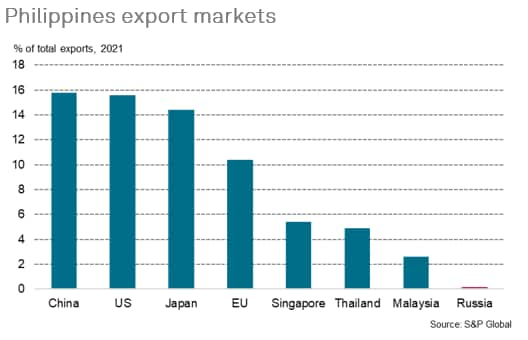 The surging price of world oil and gas is expected to be an important factor contributing to a further sharp deterioration in the current account balance for calendar 2022. In June 2022, the Philippines central bank, Bangko Sentral ng Pilipinas (BSP), revised down its current account projection for 2022 to a deficit of USD 19.1 billion or 4.6% of GDP due to a widening trade deficit, as the economic recovery and rising oil prices pushed up imports. This was a significant downward revision from its March 2022 projection of a current account deficit of USD 16.3 billion, or 3.8% of GDP. The BSP expects that the current account deficit will be USD 20.5 billion, or 4.4% of GDP.

In 2020, the current account surplus reached a record high of USD 11.6 billion or 3.2% of GDP, boosted by the sharp slump in imports due to the severe contraction in domestic demand. However, the current account shifted back to a deficit of USD 6.9 billion in 2021, or 1.8% of GDP, as growth recovery triggered higher domestic demand and rising imports.

An important stabilizing factor for the Philippines economy has been overseas worker remittances by Filipinos working abroad, which remained quite stable during 2020, down only 0.8% y/y, and equivalent to around 10% of GDP. However, an estimated 600,000 Filipino workers were repatriated in the twelve months since May 2020 as a result of job losses in their host countries, raising concerns about the impact on remittance flows during 2021. Remittances sent home by workers are an important factor supporting domestic consumer spending in the Philippines. Despite concerns about job losses for workers abroad due to the impact of the pandemic on many industries such as tourism and aviation, remittances data continues to show resilient remittance inflows for 2021. Remittances by workers abroad rose by 5.1% y/y in 2021, to a record high of USD 34.9 billion.

During the first half of 2022, inflation pressures have been rising in the Philippines. Both average cost burdens and output charges rose markedly during May, according to the latest S&P Global Philippines Manufacturing PMI survey.

Bangko Sentral ng Pilipinas (BSP) is facing escalating headline CPI inflation pressures driven by rising energy and food prices, with the May CPI surging to 5.4% y/y from 4.9% y/y in April. CPI inflation has moved even further above the BSP inflation target range of 2% to 4%. Consequently, the BSP hiked its policy rate by 0.25bps on 20th May, the first rate hike since November 2018.

The Philippines peso has also depreciated against the USD during the first half of 2022, from 51.0 per USD on 1st January to 54.4 per USD by 22 June. As the US Fed has tightened monetary policy aggressively in recent months, this has increased the relative attractiveness of the USD and US fixed income assets. 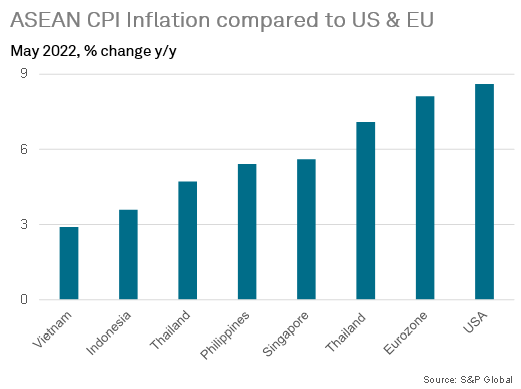 Stronger GDP growth of around 7% y/y is expected in 2022, helped by strengthening private consumption spending, an upturn in government infrastructure spending and improving remittance inflows.

Over the next decade the Philippines economy is forecast to continue to grow rapidly, with total GDP increasing from USD 360 billion in 2020 to USD 810 billion in 2030. A key growth driver will be rapid growth in private consumption spending, buoyed by strong growth in urban household incomes.

By 2033, the Philippines is forecast to become on the Asia-Pacific region's one trillion-dollar economies, joining mainland China, Japan, India, South Korea, Australia, Taiwan and Indonesia in this grouping of the largest economies in APAC. 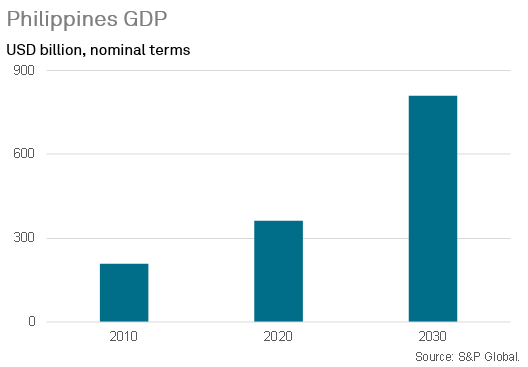 This strong growth in the size of the Philippines economy is also expected to drive rapidly rising per capita GDP, from USD 3,300 in 2020 to USD 6,500 by 2030. This will help to underpin the growth of the Philippines domestic consumer market, catalyzing foreign and domestic investment into many sectors of Philippines industry. 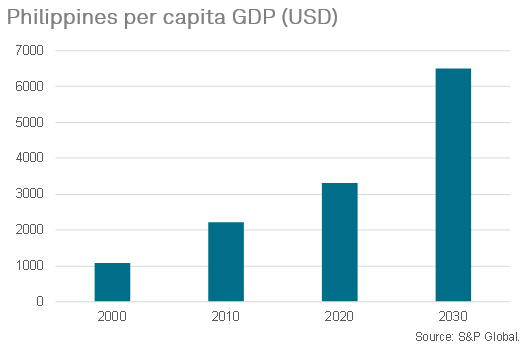 The Philippines will also benefit from its membership of the recently implemented RCEP trade deal, particularly due to its very favorable rules of origin treatment, which provide cumulative benefits that will help to build manufacturing supply chains within the RCEP region across different countries. This will help to attract foreign direct investment flows for a wide range of manufacturing and infrastructure projects into the RCEP member nations, particularly into low-cost manufacturing hubs such as the Philippines.

Consequently, the outlook for the Philippines economy over the next decade is very favorable, with significant progress in economic development expected. Rapidly rising per capita GDP and standards of living will help to underpin a broad improvement in human development indicators and should deliver a significant reduction in share of the population living in extreme poverty over the decade ahead.