The near-term outlook for the Philippines economy has been impacted by a sharply rising wave of new COVID-19 cases since mid-March 2021. This is expected to constrain the pace of economic recovery in the near-term, as strict pandemic control measures have been imposed in Metro Manila and other surrounding areas badly impacted by the latest surge in pandemic cases.

The Philippines economy suffered a deep recession in 2020 due to the impact of the COVID-19 pandemic, with GDP contracting by 9.6% year-on-year. This was the largest annual decline ever recorded since National Accounts data series for the Philippines commenced in 1946.

Household final consumption expenditure fell by 7.9% y/y in calendar 2020, while gross capital formation contracted by 34.4% y/y. Some sectors of the economy recorded severe declines in output, with the transport and storage sector recording a 30.9% y/y decline in output in 2020, while accommodation and food services output slumped by 45.4%.

Although economic activity had improved during the second half of 2020, with positive quarter-on-quarter GDP growth recorded in the fourth quarter of 2020, the escalating pandemic in March and April 2021 has dampened near-term recovery prospects.

Reflecting the global slump in international trade, exports of goods and services fell by 16.3% y/y in 2020. The Philippines export sector has also remained weak, with exports of goods down 5.2% y/y in January 2021. However, despite the large decline in exports in 2020, the current account surplus reached a record high of USD 13 billion or 3.6% of GDP, boosted by the sharp slump in imports due to the severe contraction in domestic demand. In March, the Philippines central bank, Bangko Sentral ng Pilipinas (BSP), has revised up its current account surplus projection for 2021 to USD 9.1 billion, or 2.3% of GDP.

An important stabilizing factor for the Philippines economy has been overseas worker remittances by Filipinos working abroad, which remained quite stable during 2020, down only 0.8% y/y, and equivalent to around 10% of GDP. However, an estimated 400,000 Filipino workers were repatriated during 2020 as a result of job losses in their host countries, raising concerns about the impact on remittance flows during 2021. Remittances sent home by workers are an important factor supporting domestic consumer spending in the Philippines.

Due to the severe escalation in daily new COVID-19 cases since mid-March 2021, the Philippines government has imposed a range of restrictive measures to try to contain the pandemic. A one-week lockdown was announced for Metro Manila and four surrounding provinces on 29th March but was extended for at least a further week on 5th April. The total number of people impacted by the new lockdown measures are estimated at around 26 million, or around one-quarter of the total population of the Philippines, as well as being the largest economic region of the Philippines economy. 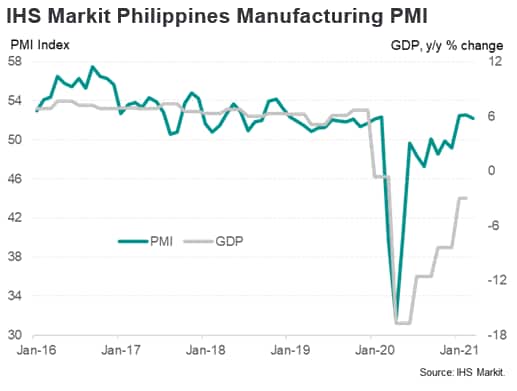 Manufacturing production contracted by 9.8% y/y in 2020, reflecting significant disruption to manufacturing output during the pandemic-related lockdown and restrictions on retail trading in Q2 and Q3 2020.

Although economic conditions had been improving the fourth quarter of 2020 and during the first quarter of 2021, the recent severe escalation in the pandemic has created renewed uncertainty about the momentum of economic recovery in the near-term. The IHS Markit Philippines Manufacturing PMI fell to 52.2 in March, down fractionally from 52.5 in February, but continuing to post above the 50.0 neutral value that separates expansion from contraction. 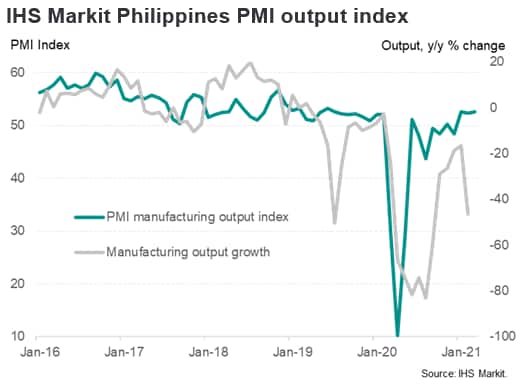 The latest manufacturing survey for March showed evidence of rising price pressures. Companies indicated that higher costs incurred by firms were often attributable to materials shortages. A sustained increase in client demand, however, allowed some firms to partially pass on rising costs. 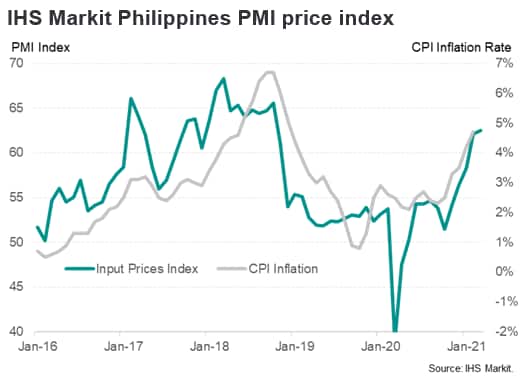 Supply chain pressures continued to build in March as lead times for inputs lengthened. Firms participating in the survey continued to cite freight delays as driving the deterioration in vendor performance, with delivery times lengthening markedly. As such, firms sought to increase their inventory holdings to minimize future shortages due to delays. 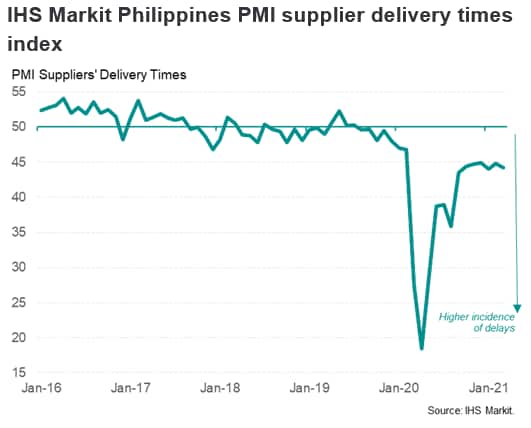 As a developing country with a population of 108 million, the Philippines confronts significant challenges in vaccinating its population with COVID-19 vaccines due to difficulties in obtaining sufficient vaccine supplies as well as the logistical problems of implementing a large-scale vaccination rollout nationwide. The COVID-19 vaccination program began on 1st March 2021, after the arrival of shipments of China's Sinovac vaccine. The Philippines has contracted to acquire 25 million doses of the Sinovac vaccine, with one million already delivered and a further 1 million doses provided as a gift by the Chinese government. The Philippines is also due to receive 9.3 million doses of the Oxford/AstraZeneca vaccine through the global COVAX facility, although so far 525,600 doses had been delivered to the Philippines by the end of March.

The COVAX facility, which is a global vaccine sharing initiative, has faced delays in receiving AstraZeneca vaccine supplies from the Serum Institute of India, a key manufacturer of the AstraZeneca vaccine. This is because India has also faced a sharply accelerating COVID-19 wave similar to the Philippines, and the Indian government has placed temporary restrictions on export of COVID-19 vaccines in order to accelerate vaccination of the Indian population.

The Philippines government is negotiating with seven global COVID-19 vaccine makers to secure sufficient supplies. A contract for 13 million doses has been agreed with Moderna, with a further contract for an additional 7 million doses also having been subsequently negotiated, providing a total of 20 million Moderna vaccine doses.

The Philippines government had planned to vaccinate 70 million persons by end-2021, but so far only 827,000 persons have received their first dose vaccination by 5th April 2021. A key problem confronting the Philippines, like many other developing countries, is that it is relying on imported vaccine supplies and is therefore vulnerable to supply disruptions due to "vaccine nationalism", as some nations with vaccine production facilities prioritize supplies to their own domestic populations due to the mounting human toll of the pandemic.

While the Philippines economy is still expected to show a positive growth rebound in 2021, the near-term outlook for the Philippines economy has been dampened by the sharply rising wave of new COVID-19 cases since mid-March 2021. This is expected to constrain the pace of economic recovery in the near-term, as strict pandemic control measures have been imposed in Metro Manila and other surrounding areas badly impacted by the latest surge in pandemic cases. Vaccine rollout in the Philippines has also been constrained by lack of sufficient supplies of imported.

Have questions about Economics and Country Risk?