OPEC decided to raise the oil output ceiling for Nigeria to 1.774 million b/d, from 1.685 million b/d. The additions are related to the Egina ultra deep-water field which is expected to pump up to 200,000 b/d, after having been started up in early 2019 by Total. This field wasn’t earlier factored in by the Cartel, with Nigeria having argued that production from Egina is not part of the OPEC+ cuts. Having faced frequent disruptions in its oil production and exports due to militant attacks, Africa’s largest oil producer was formally included in the OPEC+ production cuts earlier this year.

But its compliance has been mixed, as the country has been the leading overproducer among OPEC members participating in the deal. IHS Markit has estimated that Nigerian production has surpassed 1.9 million b/d since August. Together with Iraq, Nigeria doesn’t seem to be willing to comply as agreed. However, the country’s officials have been commenting that the country is ready to cut its oil production deeper if OPEC decide to deepen the cuts in December, adding that Nigeria plans to fully comply with its share of the cuts from October.

The nation has been trying to distinguish production of crude oil and condensates, suggesting that any ultra-light crude-like products wouldn’t fall under the OPEC+ cut agreement. Production of condensates is believed to stand close to 20% of the country’s output.

Meanwhile, the Nigerian government proposed a new budget to increase it’s crude oil benchmark price from USD 55 to 57 per barrel, which will serve as a reference price for transactions of the country’s crude oil. The oil and gas sector accounts for 65% of total revenue for the country’s government. In the most recent fiscal bill proposed, the daily production of crude oil stood at 2.18 million b/d. The government expects a 2.93% gross domestic product growth rate in 2020.

In terms of seaborne flows, according to data by IHS Markit Commodities at Sea, Europe and primarily the Netherlands continue to absorb most of Nigerian barrels. Overall volumes have remained below 1.85 million b/d in September, but are expected to increase this month, with much more now heading to Asian destinations. India is heavily relying on Nigeria as well, while more than 300,000 b/d passed via the Atlantic last month. With more light volumes expected in the near future, we expect more flows to Asia as we approach 2020. 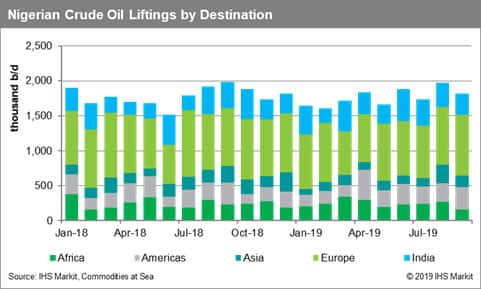