Grain freight rates have started to trend upwards in early August and a key focus has been the Atlantic region again. For example, Panamax US to China grain freight rates (P7) have increased by 20% in a month to USD45/ton at the end of August, according to the Baltic Exchange.

There are several reasons behind the recent strength in grain freight rates. In our view, grain shipping earnings have been supported by tonnage tightness in the North Atlantic region with a combination of improved grain chartering activities, and this will continue to maintain overall grain freight.

However, these factors also support our view of potential downside risk in the later stage of the fourth quarter as many positive factors are positional, and relatively short-term seasonal issues.

According to IHS Markit Commodities at Sea, a high frequency cargo analytics tool, although coal trade is still under pressure, total dry bulk shipments volume has returned to normal. Specifically, we have observed China related commodity (iron ore, bauxite, and soybean) shipments outperforms other cargo types in 2020 so far. This explains why bigger size sector performs better than smaller size in terms of freight rates.

Recently, Brazilian soybean shipments started to decrease with the shortage or depletion of soybean stock in Brazil, and tough competition with soybean from the US. However, Panamax and Supramax shipments have not dropped significantly because Brazilian soybean exports will eventually be replaced by a corn export programme in the third quarter. According to IHS Markit Global Trade Atlas custom data, corn exports rose to a year-to-date high of 4.2 metric tons in July, while soya exports decreased to 10.4 metric tons. Hence, Brazil's grain season still continues for the moment.

In the third quarter, August is the prime time for the Black sea grain season. The Ukrainian and Russian grain exports have again performed well so far this season and this supported Panamax and Supramax grain freight rates in Europe, especially the shortage in tonnages in this region has attracted Western Indian ballasters and supported Pacific rates as well. 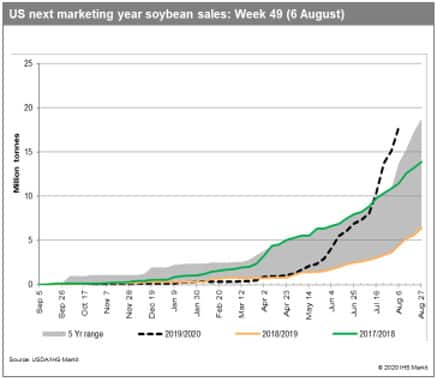 Most importantly, China has finally started to buy a lot of grain from the US. We have observed stronger-than-expected new US soybean sales to China, and in our view, the phase one deal between the US and China would eventually shift soybean trade back to pre-trade war pattern. This means 2017 level of US grain exports will be expected.

However, we still remain cautious for the fourth quarter of 2020 and expect it to be lower than the third quarter. Although we expect the US grain season will be stronger than many expected, this cannot offset the loss of the other two grain export volumes from the Black Sea and Brazil.

Also, the freight market is forecast to be under pressure once supply tightness clears. According to IHS Markit Bulkers at Sea, a significant number of laden Panamax vessels have anchored nearby Chinese ports waiting to discharge. Weather disruptions, crew change restrictions, and delay in custom clearance have caused lengthy congestion. However, we expect much less delay in the fourth quarter as Australian coal and Brazilian soybean export volumes to China has decreased and the weather condition will improve. Also, large ballasters heading to the Atlantic region will alleviate positional squeeze as we have seen in early August.

In addition, fewer chartering activities are expected in other commodities, especially coal import controls and environment regulation are forecast in the fourth quarter. Although there will be a few at a moderate level, considering the economic damages, another winter regulation is expected. 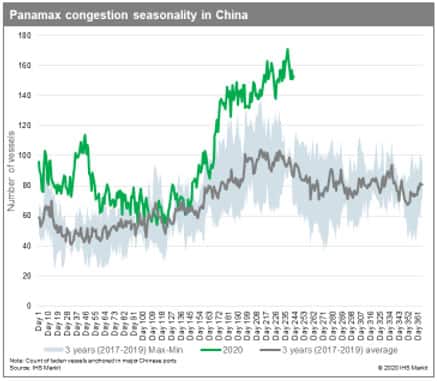 There is an apparent risk of a correction in commodity prices in the near future if our view of fundamentals is correct. Judging from the recent strength in commodities and equities, markets are anticipating a rapid V-shaped recovery in the second half of this year. However, IHS Markit's economists do not see the recent momentum in commodity markets being sustained across the second half of the year. Once the surge in pent-up demand is satisfied and the boost to apparent consumption from inventory restocking is complete, growth may fade, exposing some markets to a price correction.

In conclusion, there is still upside potential in the short-term, while downside risk remains towards the end of 2020.

For more insight sign-up to our quarterly commodity analytics newsletter