Official data on manufacturing output showed production rising in May, but the muted increase leaves the sector with a big hill to climb in June to avoid falling into contraction for a second successive quarter, corroborating earlier weak PMI survey data from IHS Markit.

Manufacturing output rose 0.2% in May according to official data from the Federal Reserve. The rise was the first recorded so far this year, so represented a welcome sign of revival. However, survey data hint strongly that the underlying business environment remained subdued in May, meaning growth could remain weak or production even contract in June.

The sector is consequently close to falling into a technical recession. Even with the 0.2% expansion of production in May, output so far in the second quarter is running 0.6% below that of the first quarter. Barring revisions to back data, it would need a 1.6% surge in production to avoid manufacturing output falling in the second quarter. With output having dropped 0.6% in the first quarter, two consecutive quarters of decline would meet the definition of a recession. The last time the manufacturing economy recorded two or more consecutive quarters of decline was 2015-16, and prior to that 2009. 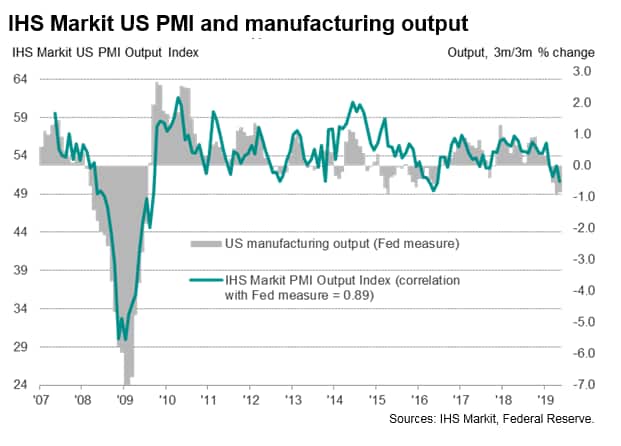 The likelihood of production growth gaining momentum in June looks slim. The IHS Markit PMI survey's manufacturing output gauge, which exhibits an 89% correlation with the three-month-on-three-month change in the official data, remained deep in territory consistent with falling output in May.

The PMI surveys tend to give a good indication of underlying production trends, cutting through some of the noise of volatile monthly changes in official data. As such, the US PMI hints that the rise in production in May masks a broader malaise in the factory sector. Indeed, the rise in output in May was linked to a jump in vehicle production. Excluding car makers, output was flat.

Worryingly, the PMI survey's new orders index fell in May to its lowest since August 2009. The decline meant output growth exceeded that of new orders to the greatest extent since September 2016, a development which suggests companies will seek to adjust production down further in coming months in line with the downturn in order book inflows. 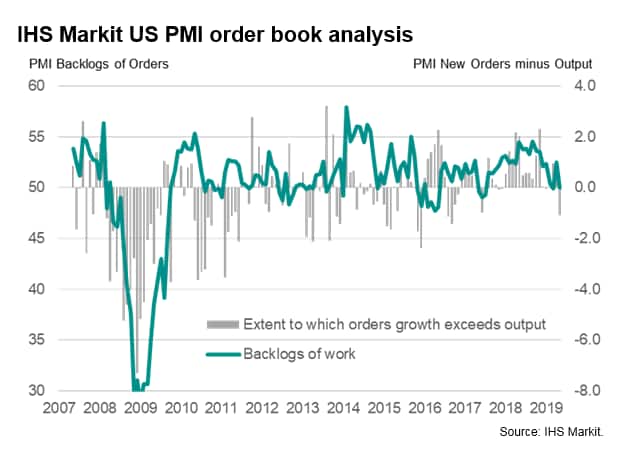 The PMI survey's forward-looking new orders-to-inventory ratio meanwhile also fell in May, down to its lowest for almost two years, adding to the prospect of production remaining subdued in June. Furthermore, companies themselves also grew more concerned about the outlook, often linked to escalating trade war worries. Manufacturers' expectations of their own production trends over the coming year fell markedly in May to the joint-lowest since the series began in July 2012.

More will be known about the health of the manufacturing economy in June with the publication of flash PMI surveys on 21st June.