The Accenture/IHS Markit UK Business Outlook showed that the impact of the COVID-19 pandemic on UK companies has lessened considerably in recent months, as the latest data indicated that a majority of businesses had seen activity return to levels seen prior to the pandemic in June.

Approximately 51% of firms in our survey panel, comprising manufacturing and service sector companies, stated that output was either the same or higher than before the pandemic began last March. This represented a rise from 35% in February as the relaxation of COVID-19 measures supported a strong boost to economic activity.

Roughly 31% of businesses reported an increase in output in June compared to pre-COVID levels, up from 17% in the February survey. This was the highest seen across all countries monitored by the Business Outlook Survey and compared with a global average of 20%.

Manufacturing firms (62%) were more likely than their services counterparts (49%) to have seen output recover from the pandemic. Anecdotal evidence suggested that an increase in spending on goods and higher orders from construction firms had supported producers. Service providers often found that the easing of many restrictions had boosted consumer facing activity, although many firms noted business activity overall remained below pre-pandemic levels.

Of those firms reporting that output had fallen since the start of the pandemic, most stated that they expect to recover within the next year. Around 17% projected a return to normal activity levels in the next six months, representing more than a third of those that had seen a decline.

About 14% of businesses expect output to recover between seven- and 12-months' time in the latest survey, while a further 9% predicted it would take until June 2023.

Only 4% of businesses expect a recovery time of more than two years, down from 5% in February. Approximately 2% of firms believe that they would never recover from the pandemic, about half that seen in the previous survey. 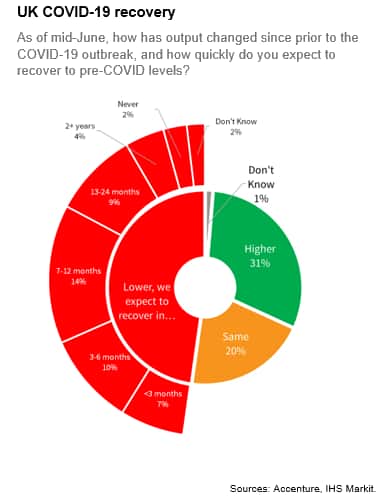 Chinese businesses most likely to have recovered

Of the 12 countries surveyed in June, China registered the highest percentage of firms that had seen output recover to pre-pandemic levels, and by some margin. Nearly four-fifths of mainland Chinese businesses found that activity was the same or higher than before the onset of COVID-19, reflecting how the country benefitted from a swift reduction in cases and relatively limited restrictions throughout much of the pandemic. The US was the next-highest at 59%, alongside Germany, followed closely by Russia and Ireland.

Whilst UK firms were the most likely to report higher output, those reporting higher or the same was slightly below the global average of 55%, suggesting that the relatively stronger economic downturn in 2020 meant that many companies still had further ground to recover. Nevertheless, the UK was ahead of three of the "big-4" European countries of France, Italy and Spain, which have seen slower vaccine take-ups and tighter public health measures.

At the bottom of the rankings was India, where only 1% of businesses stated that output was at or above pre-COVID levels. The spread of the harsh Delta variant this year, and associated restrictions, meant that companies had had little chance to recover sales. Brazil and Japan also saw relatively weak levels of recovery, as the speed of vaccine rollouts remained slower than in other countries. 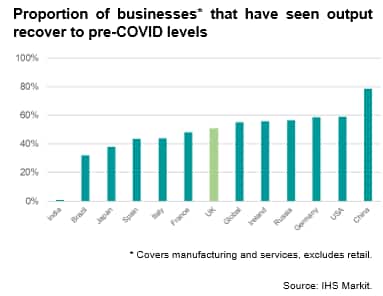