The VLCC market has been realising significant gains driven by the increasing loading activity in the US Gulf. However, the country's only deep-water oil export facility, Louisiana Offshore Oil Port (LOOP), hasn't managed to reach its potential, with only limited VLCC loadings to observe so far. Its location together with the domestic demand for sour crude have kept VLCC loadings at LOOP at rather low levels, even as the country's total shipments rise further.

Being the only terminal across the US Gulf that could accommodate fully laden VLCCs, LOOP has only recorded four loadings on VLCCs so far in 2019, heading to South Korea, Taiwan and Japan. Meanwhile, US crude shipments flirt with record high levels in parallel to the country's continued expanding production. 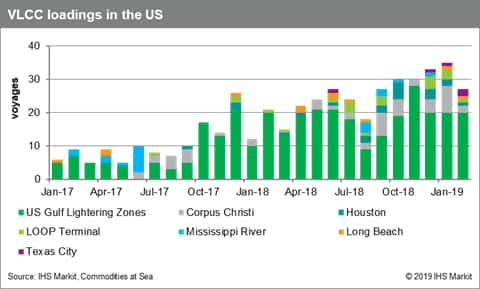 According to the Energy Information Administration (EIA), US crude exports reached a new high in February, surpassing 3.6 million barrels per day. Data provided by Commodities at Sea suggest a similar trend, with shipments pushed up further since late 2018. Most VLCC shipments load within the US Gulf Lightering Zones or at terminals across Texas, such as Galveston and Corpus Christi. This trend is expected to continue throughout this year, due to the location of export availability. Being in the eastern point of Louisiana, far away from the incremental crude exports from the Permian Basin in West Texas, the connection to LOOP cannot be an easy task.

LOOP mainly exports grades such as Mars, Poseidon and Thunder Horse, all types of ­medium-sour crude typically preferred by domestic refineries, especially after the sharp decline in flows from Venezuela and Saudi Arabia. 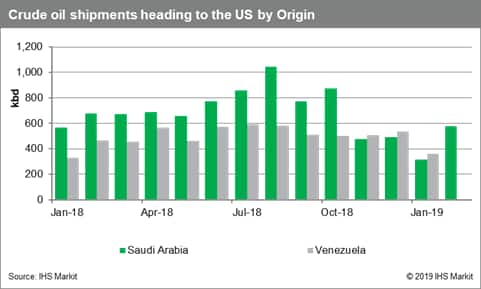 Saudi Arabia has been proceeding with production cuts, with a significant impact on shipments to the US, dropping below half a million bpd in January, but recovering last month. But we have seen no loadings from Venezuela after Washington imposed sanctions on state-owned oil and gas company Petrol­eos de Venezuela SA.

As domestic refiners are now expected to absorb most of the area's production, the LOOP terminal will most probably not ramp up exports during this year. LOOP, a joint venture between Shell, Valero and Marathon Petroleum, has been exporting since Feb­ruary 2018 after modifying its faci­li­ties to operate bi-directionally. Arrivals at LOOP remain quite strong, with the majority coming from the Middle East.