Japan's manufacturing economy continued to struggle midway through the year, according to the flash PMI data from IHS Markit. The manufacturing downturn, induced by a slowing in global trade growth and escalating trade war tensions, showed no signs of abating in June.

The survey data suggest that the manufacturing malaise is expected to extend into the second half of the year, with business expectations running at one of the lowest levels seen since the end of 2012.

While recent data have shown the Japanese economy continued to be supported by resilient growth in services activity up to May, the concern is that an increasingly entrenched manufacturing downturn could broaden out across the economy in coming months. June update to the IHS Markit Japan Services PMI (due 3 July) will provide more clarity over the broader economic trend in Japan. 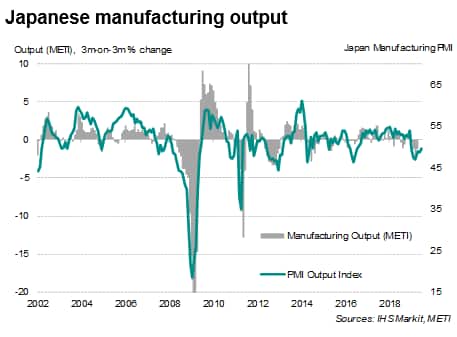 The IHS Markit Japan Manufacturing PMI fell from 49.8 in May to 49.5 in June, according to the flash estimate which is based on 80-85% of survey responses. This signalled an ongoing deterioration of manufacturing conditions at the end of the first half of 2019. Based on historical survey data, collected since late-2001, the manufacturing sector has underperformed the average monthly value recorded over the series history in each month so far this year. Forward-looking indicators point to further weakness in the months ahead. 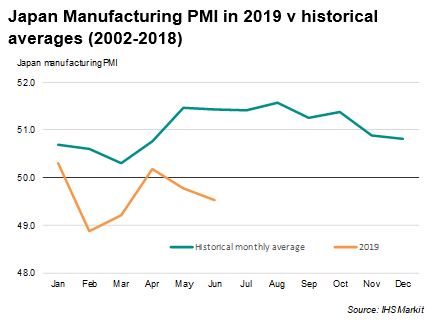 While production rose for the first time in seven months, demand conditions continued to deteriorate. Order book volumes declined at the steepest rate in three years in June, dragged down by one of the sharpest contractions in export orders since mid-2016. Softer demand for automobiles and electronics was often cited as particular sources of weak demand by surveyed firms.

The lack of new work led to the steepest decline in backlogs of work for nearly six-and-a-half years, indicating the development of excess capacity at some firms. With the June survey also showing the largest accumulation of finished goods inventories since late 2013, production volumes will likely come under greater pressure in the second half of the year.

While the flash PMI survey signalled an improvement in business sentiment, gauged by the Future Output Index, the reading remained among the lowest for well over six years. Weaker regional demand, the US-China trade war, softening European growth and the imminent domestic sales tax hike were all factors weighing on business confidence. 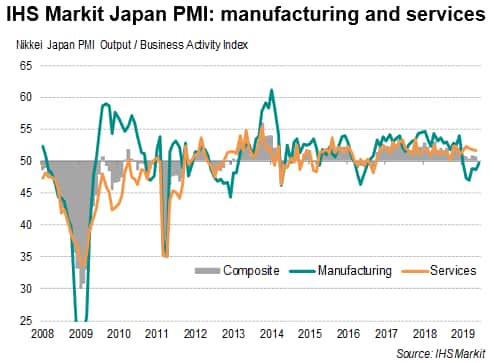 With the recent appreciation of the yen, subdued inflationary pressures, rising trade tensions and extended manufacturing weakness signalled by the latest PMI data, expectations for additional monetary support continued to grow. However, there are questions as to what else the Bank of Japan could do, in particular what form that any new stimulus could take amid already-massive monetary easing measures.

The Bank of Japan kept its monetary policy on hold in the latest meeting, though governor Kuroda signalled that the central bank has not run out of policy options, commenting that interest rate cuts could be combined with expanded asset purchases to keep on track to achieving its inflation target.

For more information about the PMI surveys and the IHS Markit PMI for Japan, please contact economics@ihsmarkit.com