India, the world's second biggest crude oil importer, absorbed around 9.5% of global trade flows last year. The country has been recently switching to new suppliers of crude oil, having an impact to the rest of the global market. Data available by IHS Markit's Commodities at Sea[1] suggests, the country used to import around 9.5 million barrels (Mn bbl) of Iranian crude oil per month in 2017, which then reached 11.7 Mn bbl in 2018. But the bilateral trade between the two has been rather volatile, with a strongly declining trend developed in the second half of last year. 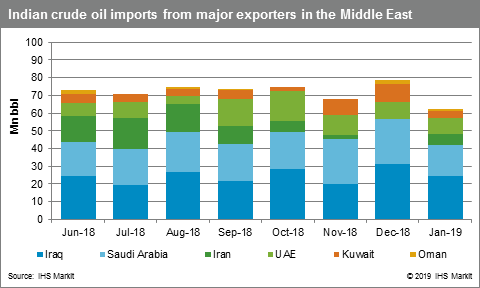 Despite India being one of the eight waivers, the countries excluded from the US re-imposed sanctions against Iran, some charterers of the country have been avoiding Iranian volumes, replacing them quickly with other countries in the Middle East Gulf. They first turned their eyes on the obvious solution; producers that were set to increase their output even during OPEC output cuts, such as Iraq. And they did. Iraq increased its exports to Iran by 9% year-on-year in 2018, while Iranian volumes heading to India decreased by around two thirds during the same period. India's Bharat Petroleum Corp seems to have much more appetite for Iraqi crude oil in 2019. The state-run refiner expanded its Kochi refinery in the southern state of Kerala to an annual capacity of 15 Mn tonnes, from 9.5 Mn. Through this expansion, much more dirtier and cheaper crude volumes will be processed, with most of that expected to originate in Iraq, which has been the refiner's major supplier so far. In 2019, 5 Mn T of Iraqi crude will be imported, against 1.5 Mn purchased last year, as officials said in recent interviews. Part of these volumes are expected to displace some of the volumes imported from other Middle East countries, most probably Iran. However, the refiner will continue to purchase Iranian crude for long as it remains an economical solution.

Another impressively good performer has been Saudi Arabia which exported around a third more to India during the fourth quarter of 2018, year-on-year. To an extent, the increased appetite of India filled the gap created in parallel to the decreasing flows to the US. 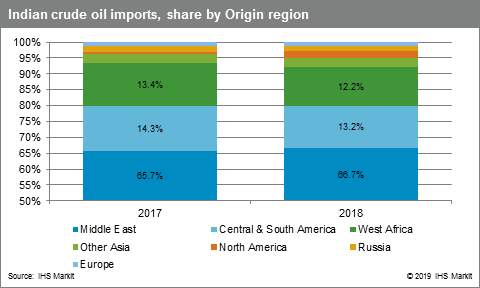 Despite the changes, last year ended with the share of the Middle Eastern exporters marginally improved, now representing two thirds of the Indian imports. But apart from Iran, Indian charterers had to replace another major supplier. This has been Venezuela, as the Latin American producer suffered significant losses in its output over the last couple of years, in parallel to the deepening political and economic crisis. Due to potential risk involved in relying on Venezuelan volumes, some charterers decided to switch to other neighbouring producers, such as Brazil and Colombia.

After the recent US sanctions against Venezuela, there has been a debate what should be expected in terms of the trade flows to India. Venezuela, even nowadays, still supplies significant volumes of crude oil to private refiners across India, with some recent views suggesting that the Latin American producer could double its exports to India. But in second half of 2018, there has been a drop in the country's shipments to India, mainly due to supply obligations to countries like China and Russia to pay back debts, which, in parallel to its overall declining production, only left significantly less to be exported elsewhere. Back in 2012, Venezuela filled the gap created in Indian imports just after flows from Iran were hit by sanctions against Tehran's nuclear programme.

But with the US halting nearly half a million barrels per day, scenarios cannot be excluded without further consideration, especially if these volumes end being severely discounted. India's Reliance Industries absorbs between 200,000 and 300,000 barrels of Venezuelan crude oil, daily. Without doubt, the political situation must have been a disturbance for several Indian refiners, but not a shock, as the imports from Venezuela have been declining for most of 2018, having hit a lowest in over five years earlier this year.

But apart from Brazil and Colombia replacing Venezuela, most of the additional cargo heading to India came from other American exporters, such as Mexico and the United States. Other exporting regions, like West Africa, remained rather flat year-on-year, with only a marginal decline of 0.7% to report. 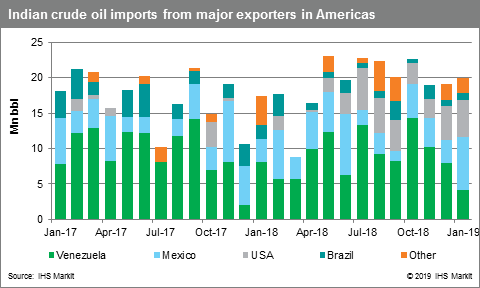 Developing trade with the US allows Indian charterers to ensure steady supply of crude oil and quickly decrease their reliance on Iranian volumes. Indians would ideally finalise long-term contracts with US suppliers, but the lack of an official selling price does not allow these negotiations to materialise into deals, at least for now. The country's refiners simply buy US crude oil in the spot market so far.

With the US supply set to further expand, India has several reasons to take advantage of these additional volumes. Its appetite has been more than obvious during the last couple of months. North America's share of Indian imports increased from 0.6% in 2017 to 2.2% in 2018. For as long as the US crude remains at a significant discount to Brent, Indian companies will continue to target importing more. And further optimism develops as the two countries seem to have been in a good dialogue, with India willing to correct the trade deficit with the US by buying more oil.

Apart from the US, another exporter that seems to look forward to establishing a long-term relationship with India is Norway. The country's energy firm Equinor ASA recently confirmed the ongoing negotiations with an Indian refiner for a long-term crude oil supply contract. 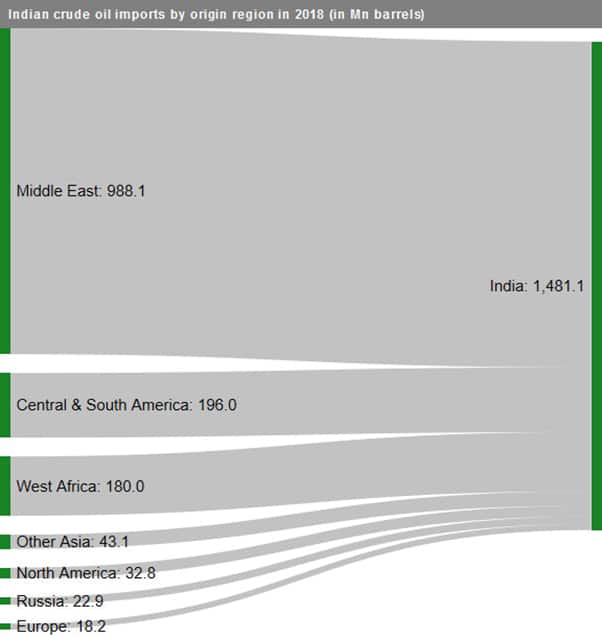 If the US decide not wave countries like India from US sanctions after March, the market expects Washington to support New Delhi by supplying crude oil on discount. However, we have to consider the distance to be covered and how much higher the transportation cost could end up being for bringing oil from the US to India.

Another scenario for India is relying less on imports by improving domestic production or substituting part of the market with bio-fuels and other sources of greener energy. After the trouble suffered during 2018, with the value of the Indian rupee under significant pressure, partially driven by the collapse of currencies of several emerging economies across Asia, Indian PM Modi wants to reduce crude oil imports by 10% to save foreign exchange. The government has been promoting the use of environmentally friendly transport fuels instead.

But most recent data suggests that India's crude oil production has been declining, with December's volumes down by more than 4%. Reliance on imports now stands above 83%. The main driver of this decline has been the reduced output from fields operated by Oil and Natural Gas Corporation (ONGC), Oil India Ltd and private operators, as the Oil Ministry commented.

Production by ONGC in December 2018 declined by around 5.4%, primarily due to the drop suffered in western offshore fields. The absence of Mobile Offshore Production Units (MOPU) in combination with problems in Electric Submersible Pump (ESP) in the wells of NBP field led to flow restriction. Meanwhile, Oil India, the second government-owned oil and gas explorer, suffered a production decline of around 4.7% in December, mainly due to decreased production from Assam fields. The decline was much smaller for private operators and joint ventures, with oil production decreasing by around 1.7% in December driven by reduced output from Rajasthan fields. The country's crude oil refinery output declined by more than 5%, with private refineries down around 15%, in December 2018 year-on-year.

In the long-term, India is expected to outpace China in increasing oil demand to support this growing economy of 1.25 billion people. In 2019, the country will be the world's second-largest demand growth centre, behind the US but ahead of China.

As China's aging population will continue consuming more crude oil, but with a slower growth expected over the next decade, India's oil and gas imports will rise much faster. OPEC expects India's crude oil demand to expand to 5.8 million barrels per day by 2040. This represents around 40% of the global increase.