1. At 8:00am ET today, the Federal Reserve announced extensive new measures to support the economy, with some of the highlights including:

a. The previously announced plan to purchase at least $500 billion of Treasury securities and $200 billion of mortgage-backed securities was expanded to be essentially limitless. The Fed said it would buy assets in "amounts needed to support smooth market functioning and effective transmission of monetary policy to broader financial conditions and the economy". It also expanded Agency MBS purchases to agency commercial mortgage-backed securities.

b. Establishment of two facilities to support credit to large employers - the Primary Market Corporate Credit Facility (PMCCF) for new bond and loan issuance and the Secondary Market Corporate Credit Facility (SMCCF) to provide liquidity for outstanding corporate bonds. This facility is open to investment grade companies and will provide bridge financing of four years.

c. Reestablishment of the Term Asset-Backed Securities Loan Facility (TALF) to support the flow of credit to consumers and businesses by enabling the issuance of asset-backed securities (ABS) backed by student loans, auto loans, credit card loans, loans guaranteed by the Small Business Administration (SBA), and certain other assets.

2. The Fed's announcement had an immediately positive impact on CDX North America Investment Grade (IG) and High Yield (HY), with spreads remaining tighter for the IG index, but the HY index widened for remainder of the day (note the x-axis is in GMT time zone): 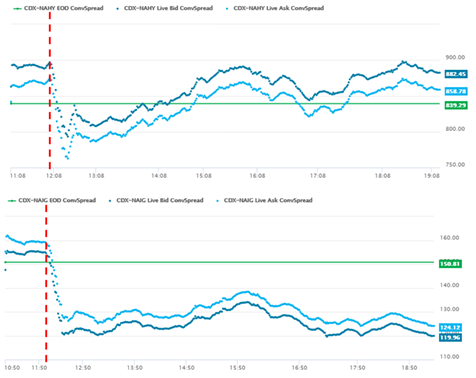 3. This morning's announcement, alongside other steps announced in recent weeks, shows the Federal Reserve will use the vast array of tools at its disposal, some in concert with the US Treasury and with other banking regulators, to support markets and the economy during the crisis. The wide-ranging programs seem intended to provide liquidity to markets, limit fire-sale dynamics that exacerbate the sharp downturn in credit and financial markets, and promote credit availability to many sectors, including consumer lending, small- and medium-sized businesses, commercial real estate finance, and municipal debt. The Federal Reserve is not, however, allowed to make direct purchases of corporate or municipal debt, or of equities. There may be interest in expanding eligible assets but doing so would require Congressional action to alter the Federal Reserve Act, a consequential step that could lead to other, unrelated changes and which might be resisted both inside and outside the Federal Reserve system. (IHS Markit Economist Ken Matheny)

5. 10yr US govt bonds first rallied on the Fed's announcement, then sold-off approaching the US equity market open, and rallied after the open and is ending the day stronger at -9bps/0.76% yield as of 3:31pm ET

6. It's worth noting that the US Secured Overnight Financing Rate (SOFR), which is being proposed as a potential replacement for USD LIBOR, has declined over the course of one week from 1.10% on March 13 to 0.04% on Friday March 20. The movement is occurring at a time when the repo market is under significant strain, with dealers attempting to mitigate risk by periodically increasing collateral haircuts (the percentage of the collateral's value they are willing to finance) over the past few weeks.

7. On 22 March, the FDIC, the Board of Governors of the Federal Reserve System (FRB), the Office of the Comptroller of the Currency (OCC), the National Credit Union Administration, the state banking regulators, and the Consumer Financial Protection Bureau issued the Interagency Statement on Loan Modifications and Reporting by Financial Institutions Working with Customers Affected by the Coronavirus to encourage financial institutions to work constructively with borrowers impacted by COVID-19 and provide additional information regarding loan modifications. The statement included, but was not limited to:

b. Confirmed with staff of the Financial Accounting Standards Board (FASB) that short-term modifications made on a good faith basis in response to COVID-19 to borrowers who were current prior to any relief are not TDRs.

8. The most severe COVID-19 outbreaks so far are clustered in areas of cool, dry seasonal weather, according to four independent research groups in the U.S., Australia and China that analyzed how temperature and humidity affect the coronavirus that causes the disease. Higher temperature summer months ahead might offer a lull in new cases across the heavily populated temperate regions of the Northern Hemisphere, but several of the scientists predicted that the disease would resurge in autumn upon the return of cooler temperatures and low humidity. (NY Times)

a. VW will stop manufacturing operations at its Puebla plant and Guanajuato engine assembly plant in Mexico from 30 March until 12 April, reports NF News.

b. Toyota announced that is extending the suspension of production at its automobile and components plants in Canada, Mexico, and the United States from 23 March until 3 April and currently plans to resume production on 6 April.

c. GM and Nissan said they will be suspending operations at plants in Mexico.

11. The report entitled "LNG supply investment under pressure as COVID-19 and oil price war realities set in" was published today that discusses the impact of lower oil prices on near term and upcoming energy company investment decisions. The research examines to what extent the traditional international oil companies (IOCs) have the financial heft and the appetite to continue to invest counter-cyclically given tighter cash flows and weak market conditions. (IHS Markit's Roger Diwan)

12. To address the imminent influx of patients infected with coronavirus in New York, as the state now represents nearly 6% of global cases, Governor Andrew M. Cuomo said Monday morning that he would issue an emergency order requiring hospitals to increase capacity by at least 50%. (NY Times)

13. The US Senate was working to overcome differences on a rescue package totaling at least $1.6 trillion after failing to advance the bill by 11 votes yesterday (WSJ)

1. According to IHS Markit Economist Timo Klein, the dramatic escalation of the COVID-19 virus pandemic across Europe has prompted the German government to invoke the emergency escape clause of the country's debt brake. Fiscal policy measures being taken now can roughly be grouped into four different categories:

a. Additional spending and lower tax revenues that are represented in the supplementary central-government budget going through the legislative process this week.

b. Short-time work subsidies financed (at least initially) by reserves at the Federal Labour Agency.

d. State guarantees for the WSF to underwrite debts of affected companies of up to EUR400 billion. Finance Minister Olaf Scholz has indicated that guarantees will be raised even further if deemed necessary and are thus open-ended.

2. The CEO of the Volkswagen (VW) Group, Herbert Diess, has warned that the initial shutdown of its plants as a result of the coronavirus disease 2019 (COVID-19) virus outbreak across Europe could extend beyond the current planned two to three week shutdowns. (IHS Markit's Tim Urquhart)

3. On 20 March, the Bank of England and Prudential Regulation Authority announced measures "aimed at alleviating operational burdens" given the coronavirus disease 2019 (COVID-19) virus pandemic. The 2020 stress test for eight major banks has been cancelled outright. In addition to a move on 11 March cutting the UK's countercyclical buffer rate to zero, the statement flags that banks may draw down capital and liquidity buffers "as necessary" to support operations "through this temporary shock". Parts of the statement indicate a clear softening of the accounting treatment for loans facing COVID-19-virus-related interruption in payments: this implies reduced risk of a rapid surge in impairment ratios and the need for provisioning with adverse impacts on capital ratios. (IHS Markit's Brian Lawson)

4. The Nigerian government devalued the naira's official exchange rate by 15% on March 20, after announcing substantial government spending cuts the day before. The devaluation of the naira's official exchange rate is in line with IHS Markit's expectation, although it occurred in a shorter timeframe than in our baseline assumption. The steep fall in foreign reserve holdings left little alternative for the Nigerian authorities but to devalue the country's currency. Latest statistics released by the CBN show that foreign reserve holdings fell by USD2.9 billion over January 1 - March 19. (IHS Markit Economist Thea Fourie)

1. Bank Indonesia has reduced the policy interest rate by 50bps over the past two months. The Indonesian government has introduced two fiscal stimulus packages and is working on a third one to blunt the effect of the rapidly spreading COVID-19. The government plans to limit bond issuances by using some carryover cash worth a reported IDR136 trillion from 2019; as part of the 2020 budget, the government had also put a fiscal buffer into place for the year worth IDR10 trillion, which will be rapidly used up to fight the COVID-19 virus. BI and the government also do not have endless space for stimulus measures without further undermining the stability of the Indonesian rupiah, which is quickly heading to lows last seen during the Asian crisis. (IHS Markit Economist Bree Neff) 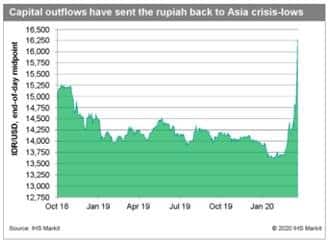 Datacentre’s require a great amount of capital investment, largely rely on credit to help cover the upfront costs a… https://t.co/XPJ9HE4Cio

Join us this Wednesday, December 7th, for a webinar discussing technology-focused insurers, including the opportuni… https://t.co/MvHlTjC4ka

In the first episode of our private markets podcast, learn more about how ESG is impacting private equity firms. Li… https://t.co/otpeyRR7Xw