Early PMI survey data showed economic growth rates coming under pressure in the major developed economies as a boost to businesses from the post-Omicron loosening of COVID-19 restrictions was countered by mounting headwinds. Companies reported demand to have been subdued by soaring inflation and the mounting cost-of-living crisis, as well as by ongoing supply constraints and rising uncertainty about the economic outlook, especially given rising prospects of monetary policy tightening.

The impact of the headwinds varied by country, with the UK seeing growth slow most sharply and a marked slowing also recorded in the US. Growth remained more resilient in the eurozone, while Japan even saw growth lift slightly higher, albeit still lagging behind the other major developed economies.

Price pressures meanwhile intensified on average, thanks in part to higher energy prices, but the surveys also brought signs of a tentative peaking of industrial raw material price inflation, which could signal a broader peaking of inflation in coming months.

Growth across the four largest developed economies - the 'G4' - slowed in May to the weakest since the pandemic lockdowns of early 2021, according to the flash PMI survey output indices from S&P Global.

The UK led the slowdown, its composite PMI covering both manufacturing and services sliding some 6.4 points from 58.2 in April to 51.8, registering the worst performance since February 2021 and indicative of GDP rising at a quarterly rate of just 0.1%. Growth waned especially sharply in the UK's service sector, but factories also reported a slower rate of expansion.

Growth also slowed markedly in the US, the composite flash PMI down 2.2 points from 56.0 in April to 53.8, its lowest since January, though still broadly indicative of the economy growing at a quarterly rate of 0.5%. Both manufacturing and services reported weakened growth rates, though the former remained somewhat more robust.

In the eurozone, a more resilient performance was recorded, with the composite flash PMI merely dipping 0.9 points from 55.8 to 54.9, thereby continuing to signal encouragingly robust quarterly GDP growth of approximately 0.6%. Although the eurozone's manufacturing sector remained largely becalmed, with near-stalled production growth recorded for a second month running, the service sector continued to report buoyant growth of business activity.

While Japan reported the weakest composite PMI of the G4 for the sixteenth successive month, it was the only economy to record an improved reading, with the PMI edging up from 51.1 in April to 51.4, its highest since December, as a strengthening trend in services offset a weakened manufacturing growth rate. 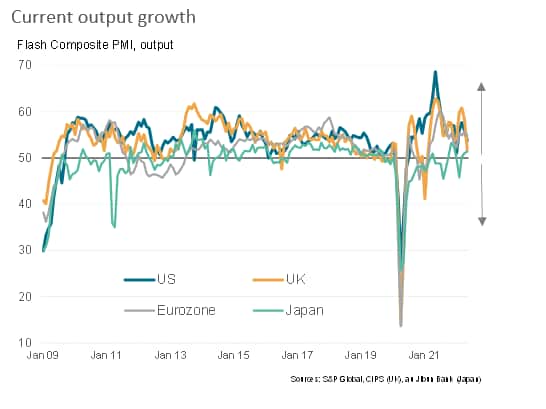 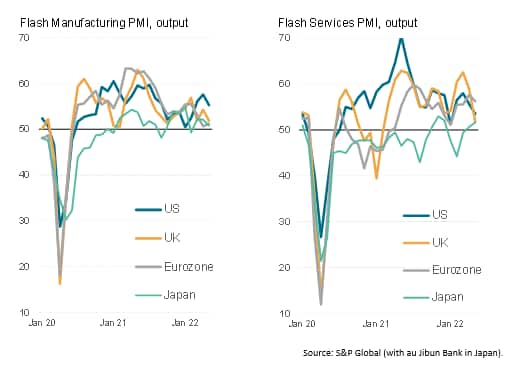 In all four economies, growth was buoyed by increased spending on consumer services such as travel, tourism, recreation and hospitality, as pandemic-related restrictions continued to be wound down both domestically and internationally.

The exception to the loosening of COVID-19 restrictions was mainland China, where efforts to control the Omicron variant led to further global supply chain disruptions. Alongside supply delays linked to the Ukraine war, China's lockdowns reportedly contributed to a slowing of manufacturing growth in all four economies. While the China impact most commonly reported in Japan, the Ukraine war impact was most heavily felt in the eurozone.

However, with the exception of Japan, supplier lead times lengthened to a lesser extent than in prior months, reflecting some moderation of broader global pandemic-related logistics and supply issues. It is nevertheless clear that supply shortages remain a clear and ongoing constraint. 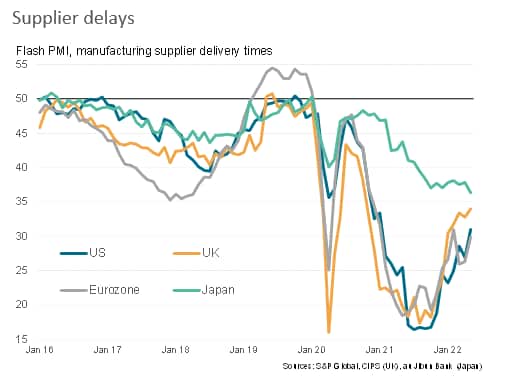 A further common factor dampening growth across manufacturing and services in all economies was the rising cost of living, with purchasing power having been dented across the globe by unprecedented price rises in recent months. The May surveys showed companies' costs increasing at historically elevated rates, with new record rates of inflation seen in the UK and Japan, albeit with the latter running behind all other G4 economies. Rates of increase eased in the eurozone and US, but merely from record highs in recent prior months. 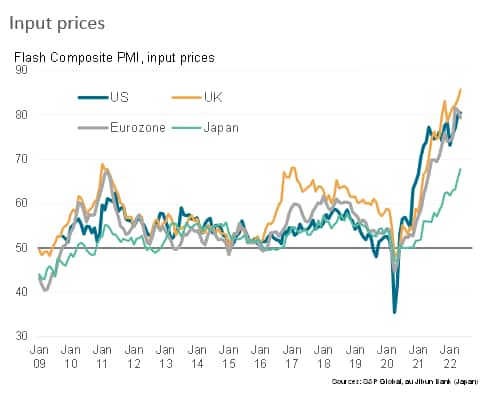 One aspect of input cost inflation which has started to moderate is that of industrial raw material prices. Although still prevalent, supply delays have eased, taking some pricing power away from suppliers. However, May has meanwhile seen further upward pressure on costs from rising energy prices, resulting from the Ukraine war, as well upward pressure on wages due to the tightened labour markets. Employment rose across the G4 economies at the highest rate since comparable data were available in 2007, led by stronger hiring in the US and Eurozone and slower but still solid hiring in the UK, as firms sought to boost capacity. 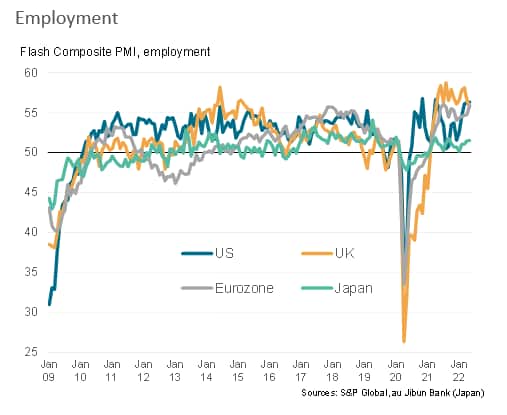 Whether such strong hiring will persist in coming months remains unclear. Employment is typically a lagging indicator, and the forward-looking indicators have turned down in recent months, casting a shadow of uncertainty over future hiring. In particular, new orders growth across the G4 has slipped to the lowest since February 2021, and backlogs of orders - the amount of work that companies have accumulated to sustain output in the months ahead - is also now rising at a slower rate.

Perhaps more importantly, business expectations regarding output in the coming 12 months have fallen since the outset of the Ukraine war, lifting slightly on average across the G4 in May but still running at a level not seen since late-2020.

Sentiment for the next 12 months has deteriorated most sharply in the UK, where companies have also grown increasingly concerned about the escalating cost of living crisis and prospects of aggressive monetary policy tightening. Sentiment also slipped lower in the eurozone, driven in part by rising concerns over the impact of rising energy costs and supply delays linked to the ongoing conflict. Japan's businesses also became gloomier in May, in part due to the knock-on effect of China's lockdowns on supply but also in part linked to rising costs, in turn sometimes associated with the weakened yen.

The only G4 economy to see business sentiment rise in May was the US, though even here confidence remains only marginally above the long-run average - and down sharply from earlier in the year - having been hit by concerns over rising borrowing costs, inflation and rising economic uncertainty. 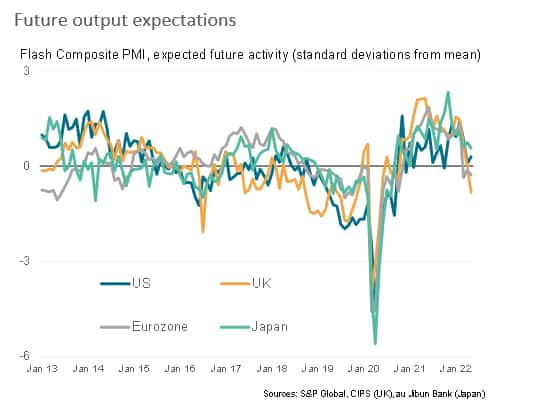 Growth risks tilted to the downside, but has inflation peaked?

With the inflation shock being most keenly felt in the UK, it's perhaps not surprising that the country has seen business optimism deteriorate to the greatest extent of the G4 economies. However, part of the slowing of output growth in the UK and US during May was in part a reflection of the rebound from pandemic restrictions starting to ease. With the eurozone and Japan having introduced restrictions to fight the Omicron variant later than the US and UK, and then relaxed these restrictions later, it's likely that these economies could likewise see their rebounds fade in coming months, following the pattern of the UK and US.

However, for all economies, the path of inflation and the cost-of-living crisis remains the principal concern, especially as central banks are prioritizing the need to rein in inflation expectations via monetary policy tightening. That said, there are some signs that supply-chain-related input cost pressures have peaked, providing some encouragement that broader inflationary pressures will likewise peak soon. 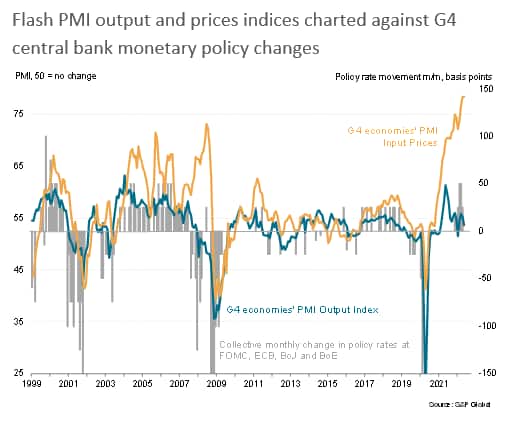