Panamax average earning has been supported by a strong grain demand this year, despite the COVID-19 pandemic and limited coal trade. Chinese demand for soybean remains strong, with the recovery in pig herd and pork consumption from the outbreaks of African swine fever. Brazilian farmers have benefitted from favourable currency exchange rates and a record harvest season, and as a result, Brazilian soybean export volume to China looks set to make new monthly records several times this year. Also, as part of the US-China phase one trade agreement, China has committed to purchasing agricultural products from the US at almost 50% above the 2017 baseline.

Particularly in August, while the Brazilian and Black Sea grain seasons continued, chartering demand for US grain exports happened earlier and stronger than many expected. Consequently, US grain freight rates (P7) to China reached an 11-month high at USD45/tonne (HSS 66,000 metric tonnes from US to China) and Atlantic Round Voyage (P1A) earning for Panamax increased above USD20,000/day in mid-August (14 August), for the first time since September 2019, according to the Baltic Exchange.

However, it did not take long for the rates to face a sharp correction. The Panamax Atlantic rates dropped below USD10,000/day on 14 September and US grain rates also retreated by USD5/tonne (equivalent to USD330,000 per shipment) within a month. Strong US grain demand could not offset the losses of the Black Sea and Brazilian grain export volume after the end of their respective grain seasons. Furthermore, we observed Panamax coal stem switched to cheaper Capesize and Supramax in September. As these classes share cargo, each sector cannot remain at higher rates alone. Strong Panamax freight rates need reasonable Capesize and Supramax rates, and vice versa. Based on this assumption, FFA rates between Capesize and Panamax, and between geared carriers, generally shares similar directions.

Indeed, when Capesize freight rates reached their 13-month high at USD34,896/day (6 October) in early October, it made a positive impact on Panamax sentiments and improved Panamax FFA assessments. However, the IHS Markit view is that fundamentals will ultimately determine price. The degree of grain chartering activity out of the US and when Chinese coal import quota will be eased will be key factors for the fourth-quarter Panamax freight market.

In our view, the phase one deal between the US and China would eventually shift soybean trade back to pre-trade war patterns. This means we can expect US grain export to return to, at least, the 2017 level. The IHS Markit Agribusiness intelligence team expects the US combined corn and soybean export to peak at 14 million tonnes in November. 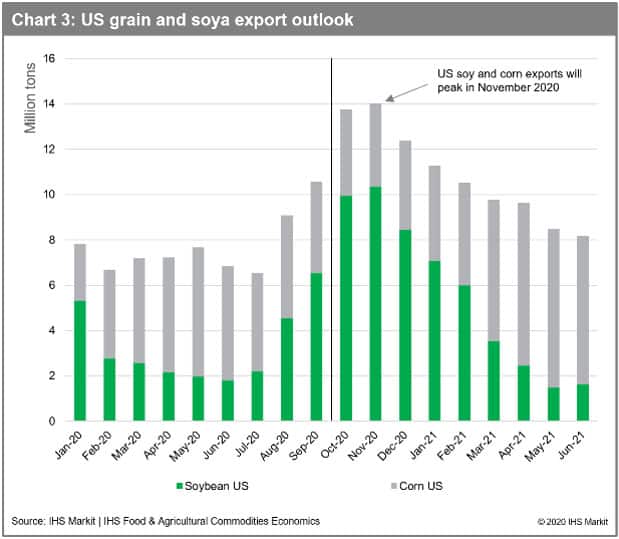 For the coal trade, the Indian coal import demand has made an impressive recovery, and this in turn supported Pacific rates; however, the risk of Chinese coal import controls remains. Chinese customs data shows total cleared coal cargo for September were down 38% from a year ago to 18.67 million tonnes, marking the worst level since the final month of 2019. The IHS Markit coal, metals, and mining team understands that the government's position on import restrictions has not changed; therefore, it is unlikely controls would be eased for the remainder of the year despite speculation that the clearance process could be potentially relaxed. According to IHS Markit Commodities at Sea data, October seaborne coal shipments to China is expected to fall further by 13% to 13.7 million tonnes, from 15.8 million tonnes in September and 17.0 million tonnes in August.

Additionally, as the spread between Capesize and Panamax has widened significantly in early October, we do expect Panamax market share in coal shipments to increase in the short-term. However, our forecast models predict that Capesize rates will adjust down again, hence, the positive impact from the Capesize cargo split would not hold.

From the supply side, we observed plenty of ballasters to the Panama Canal to meet US Gulf grain demands. This will ease positional tightness in the Atlantic. Furthermore, the number of laden Panamax vessels anchored nearby Chinese ports peaked in August, averaging 72 ships, and declined to 52 ships in early October as coal and soybean shipments to China has decreased as well as improved weather conditions. This will also provide enough supply for NOPAC grain.

In short, Panamax freight will be supported with strong US grain sales to China and improved coal demand from India and split cargo from relatively expensive Capesize stem in the short-term. However, our caution towards the end of the year remains as fewer chartering activities are expected with China's coal import controls and environment regulation, as well as efficient positioning of tonnage and potential commodity price correction.