Global supply chains are facing resurfacing problems at the end of 2020. After a year of disruption from the coronavirus disease 2019 (COVID-19) pandemic, the volatility in demand trends has led to an imbalance in the global supply of freight containers and meant suppliers are increasingly struggling to provide inputs to manufacturers in a timely manner.

With global manufacturing output growing in November at one of the fastest rates recorded over the past decade, import demand is on the rise, putting increased pressure on global supply chains. There is consequently a risk that weak supply and higher freight charges will drive a further rise in input costs in the near future, which firms are likely to pass on to consumers as they continue to struggle with weak margins after the global lockdown.

The JP Morgan Global Manufacturing PMI illustrated the impact of deteriorating global supply chains in November, as the Suppliers' Delivery Times Index indicated a steep lengthening of lead times faced by manufacturing firms. Excluding the period of heavy disruption from the COVID-19 pandemic through February to May 2020, this marked the strongest deterioration in supplier performance since April 2011.

A key reason for the supply delays in November, according to surveyed firms, was that global freight shipping took much longer to arrive, often due to a delay in Chinese exports. At the same time, many businesses noted that port capacity was coming under pressure, as the fall in global demand and reduced shipping schedules earlier in the year have led to a bottleneck of empty shipping containers in western ports. Thus, processing capacity for new cargo arrivals has reduced sharply, all whilst import demand has surged following the lockdown.

Our analysis of PMI survey contributor comments - which tracks the frequency or words or phrases in the qualitative reasons given by global panellists in relation to key metrics monitored by the PMI survey - has picked up these trends. The frequency of mentions of 'port' or 'shipping' delays rose markedly in November to approximately 20% of all global respondents. This was higher than the previous peak of 16% in March, when COVID-19 measures in Asia curtailed global shipping activity. 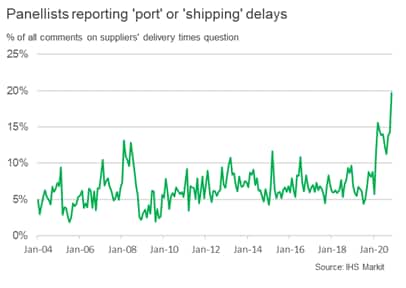 The current problems with global supply chains are notably concentrated on east-to-west routes, as a lack of containers in eastern ports have meant goods exports are being delayed, while ports in Europe and North America face heavy congestion. Consequently, some shipping companies are reportedly having to redirect containers to other ports, such as Maersk which has switched from Felixstowe to Liverpool for UK arrivals for the final weeks of the year.

This was illustrated by national PMI data in November, which showed that the sharpest lengthening in suppliers' lead times among major economies were in the UK, Canada and France. Moreover, these countries, as well as USA and (notably) Germany, recorded faster deteriorations in supplier performance compared to October. In contrast, Asian countries saw only modest slowdowns in deliveries. 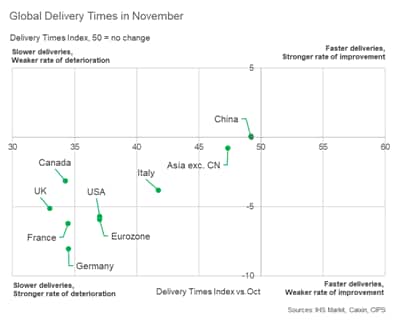 The manufacturing sector has been a bastion of the global economic recovery in recent months, recording stronger expansions than the services sector as COVID-19 measures have enabled goods production to scale up more quickly. In November, the JP Morgan Global Manufacturing Output Index posted 55.2, while the Global Services Business Activity Index posted 52.2, marking a fifth successive month where manufacturing growth has outpaced that of services.

However, the constraint of slower freight deliveries could subdue overall manufacturing growth in December and the first quarter of 2021, especially if producers are unable to procure inputs. This risk was illustrated by Honda's announcement on 9th December that production had stopped at their UK plant in Swindon, due to a shortage of parts and a hold-up at domestic ports. That said, the UK is facing additional short-term pressures as companies move goods in and out of the country ahead of the Brexit deadline. Nonetheless, similar events could unfold elsewhere, particularly as manufacturers have often held fewer stocks during 2020 in an effort to reduce inventory holding costs, thus relying more on speedy input deliveries.

Another strong headwind on global producers is a marked rise in input prices midway through the fourth quarter, as freight costs surge in response to lower capacity and the imbalance of supply and demand. Shipping companies have seen Chinese container prices rise three- or four-fold in a matter of months, contributing to the highest rate of overall input price inflation since November 2018.

With companies still batting weak margins after the global economic downturn, these higher costs have often been passed on to consumers, as indicated by a solid rise in output charges in November. While the pace of increase remained slower than for input costs, it is still trending upwards, driven by faster inflation across the US, UK and eurozone. These inflationary pressures have the potential to build further during the busy Christmas period, meaning consumers could also face a sharp increase in prices. 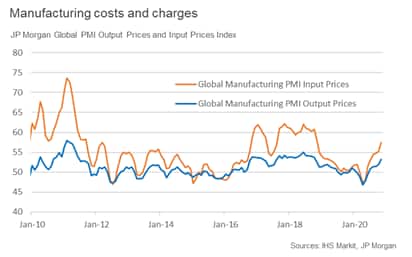 Going forward, these largely structural issues for global supply chains mean disruption could continue well into next year. As shipping routes recover to their normal schedules, empty containers should slowly return to Asian ports, increasing capacity on east-to-west routes and reducing the pressure on freight prices. How long this takes remains unclear though, which makes PMI data as important as ever for tracking these global manufacturing trends.

The next JP Morgan Global Manufacturing PMI is released on Monday 4th January 2021.