The worldwide PMI surveys indicated a further month of solid economic growth in September, with rising demand generating a return of jobs growth globally. New inflows of business rose at the joint-fastest rate since 2018 and a net increase in jobs was reported for the first time since January. However, the overall pace of output growth edged lower while business sentiment about the outlook slipped for a second month amid growing worries of further waves of coronavirus disease 2019 (COVID-19) infections. With tighter than previously expected virus containment measures likely to dampen global economic growth in the fourth quarter, GDP growth looks to have peaked in the third quarter.

The headline JPMorgan Global PMI™ (compiled by IHS Markit) fell for the first time in five months in September, dipping from 52.4 in August to 52.1, but remained in positive territory to merely indicate an easing in the rate of expansion. Moreover, inflows of new business accelerated during the month to hint strongly that the slowdown may prove temporary, likely constrained by capacity and supply chain issues. New orders grew at the steepest rate since January, while backlogs of work showed the largest rise since 2018. 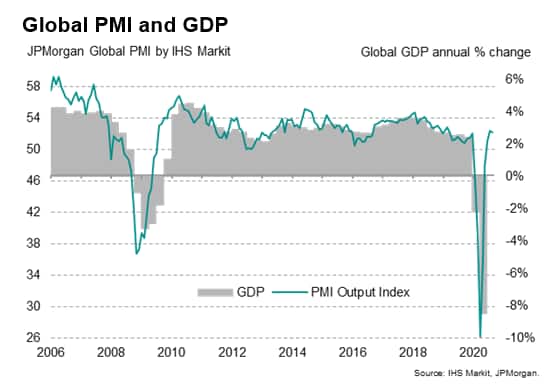 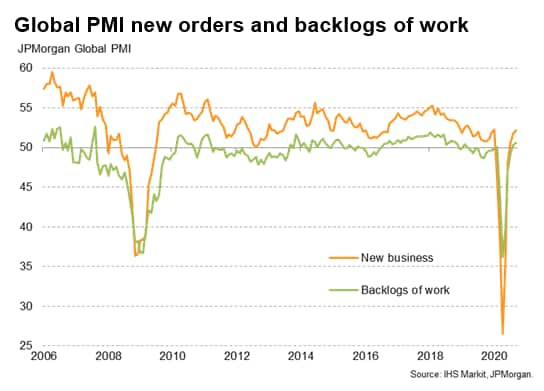 We use a linear regression to estimate the annual growth rate of GDP implied by the PMI. This model indicates that the annual rate of decline likely peaked at approximately -12% back in April at the height of worldwide COVID-19 related lockdowns, but that the relaxation of virus restrictions has since helped drive an improvement to an approximate 2.5% rate of growth in August and September.

Note that this does not indicate that the economy is now larger than a year ago, merely that the rate of growth on an annual basis has improved to around 2.5%, which still represents a very modest rate of expansion relative to the collapse seen at the height of the pandemic.

Manufacturing led the expansion, with the rate of output growth dipping marginally during September but nonetheless signalling the second-fastest upturn for over two years. Growth also slowed in the service sector from August's seven-month high, lagging behind manufacturing due mainly to the greater hit to many types of services activity from ongoing virus-related social distancing measures.

More encouragingly, inflows of new business continued to accelerate in both manufacturing and services, reaching 29- and eight-month highs respectively, suggesting that the recovery in demand for goods and services continued to gain momentum at the end of the third quarter. A key development driving growth in the factory sector was a revival of global goods trade, with manufactured exports rising in September at the fastest rate since March 2018. In contrast, exports of services - a significant portion of which is accounted for by travel and tourism - continued to decline at a marked pace, the rate of decline even re-accelerating slightly amid reports of increased travel restrictions (albeit falling at a much less severe rate than seen at the height of the pandemic in the second quarter). 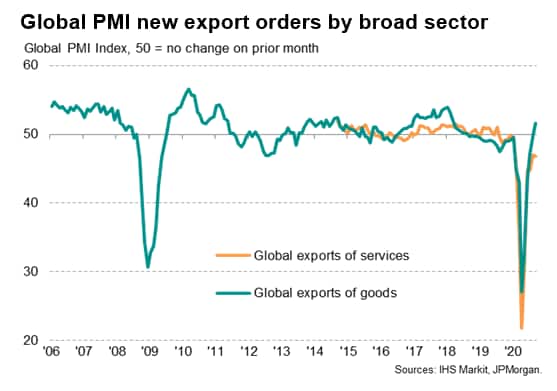 The sustained growth of global output and the rise in new work placed at firms in September was accompanied by the first net increase in employment worldwide since January.

Jobs growth was seen in the service sector for a second month running while manufacturing jobs continued to be cut, albeit at the slowest rate since January. However, it should be noted that services also saw a steeper rate of job shedding during the height of the pandemic than the manufacturing sector. 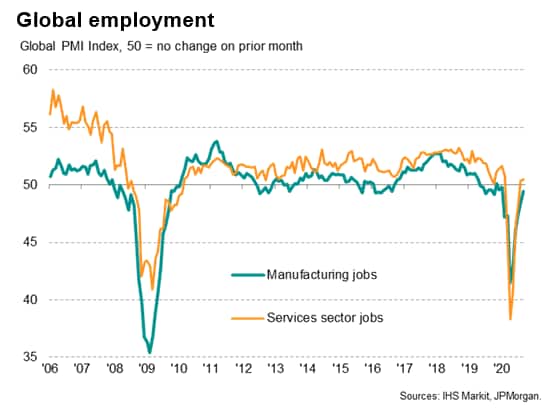 Can strong growth be sustained?

The survey data therefore add to evidence that the global economy rebounded sharply in the third quarter after business activity and GDP collapsed at an unprecedented rate in the second quarter. Furthermore, the expansion remained solid as the quarter progressed through to September.

The focus now turns to whether this robust expansion can be sustained into the fourth quarter. To this end, a note of caution is provided by the PMI's future business expectations index, which is based on the only subjective question asked of the survey contributors, asking how companies expect their own output level to change over the coming year. This gauge hit a low in April before rising strongly in May and June, with a further modest gain seen in July. Since then, however, the future expectations index has lost some ground, albeit remaining elevated by standards seen over the past two years.

The dip in confidence over the past two months nevertheless reflects growing worries among companies about rising COVID-19 infection rates and whether governments and central banks can deploy (or maintain) sufficient stimulus to sustain strong growth and protect labour markets. 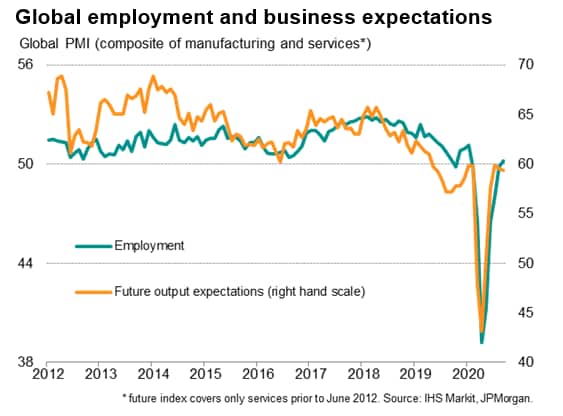 Not surprisingly, the principal area of renewed weakness in terms of future optimism is being seen in the service sector. 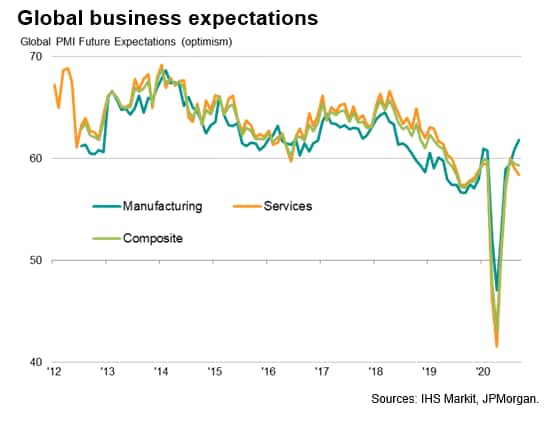 The renewed worries about the impact of the pandemic on business have been accompanied by rising, or stubbornly high, COVID-19 infection numbers in many countries, which are in turn being accompanied by increased pressure on governments to reintroduce further social distancing measures or even new lockdowns.

The global PMI had collapsed to an all-time low of 26.2 in April as governments around the world took increasingly drastic measures to contain the spread of the COVID-19 virus, including the closure of non-essential businesses and schools and severely restricting movement and travel. Between May and August the PMI rose markedly as these containment measures have been eased on average globally.

However, September saw barely any overall easing in Covid-19 containment measures, and both August and September have in fact seen containment ease to a far lesser extent than had previously been expected, based on government roadmaps for opening up their economies, due to 'second waves' of rising infection numbers in many countries.

The degree to which economies have 'locked down' in the fight against the pandemic can be gauged by IHS Markit's COVID-19 Containment Index. This gauge is based on a basket of measures applied by governments to control the spread of the pandemic, such as non-essential business closures, school closures and travel and mobility restrictions linked to social distancing policies. As these measures are tightened, the index rises towards 100 and a relaxation of measures causes the index to fall towards zero. The global average COVID-19 Containment Index has eased from a peak of 64 in April to 35 in August and 34 in September. However, back in June, government plans to open up their economies had pointed to the containment index falling to just 22 by September. In other words, tighter containment measures have had to be applied for longer than had been previously been expected globally.

What's more, the path to further opening up economies is now gloomier than had been expected back in the summer. Given governments' notified plans for future virus containment measures, the Global COVID-19 Containment Index is now expected to still be stuck at 23 by December instead of a reading of 12 that had been anticipated back in the summer, again reflecting rising infection numbers.

These tighter than previously expected virus restrictions are inevitably going to further impact growth, especially in face-to-face service sectors. If lockdown pressures intensify further, the risk of the impact spreading to other sectors such as manufacturing rises.

📆 FOMC, ECB, BoE meetings, and December flash #PMIs in focus this week ahead. Preview the week with us:… https://t.co/8aC06UqjH5