Inflationary pressures in the worldwide factory sector moderated to the lowest for a year-and-a-half in July, according to the latest JPMorgan Manufacturing Purchasing Managers' Index™ (PMI™), compiled by S&P Global. The reduced rate of increase primarily reflected an easing of global supply chain constraints, linked in turn to weakening demand for raw materials and destocking.

However, the overall rate of price inflation signaled for both input costs and average selling prices remained elevated, with persistent upward pressure on costs resulting from an unprecedented broad-based upswing in wage pressures as well as high energy and shipping costs. 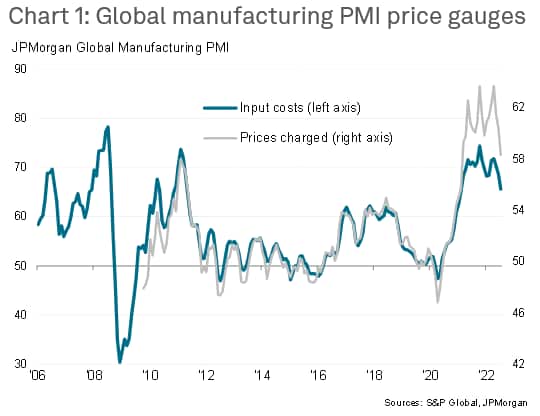 July's PMI surveys showed the average price charged for goods rose worldwide at the slowest rate since February 2021, with the rate of inflation cooling for a third successive month from April's all-time high.

Rates of selling price inflation fell sharply in the US, Eurozone and UK, which have all seen especially steep price rises over the past two years, dropping to rates not seen since early-2021. Inflation rates also slowed across Asia on average, albeit only very modestly in Japan, where the weaker yen has driven up import cost. In mainland China, selling prices even fell for a third successive month in July, widely ascribed by factories to a weak demand environment. 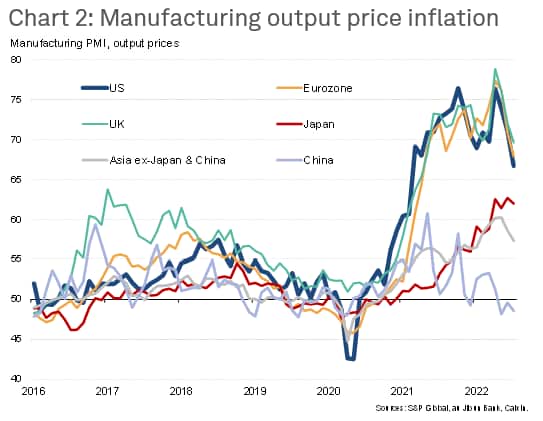 Key to the slower rate of selling price inflation was a further moderation of input cost pressures. Globally, average prices paid for inputs by factories rose at the slowest rate since February 2021, with moderating rates of increase seen in all major economies except for Japan, which principally reflected the recent exchange rate depreciation. 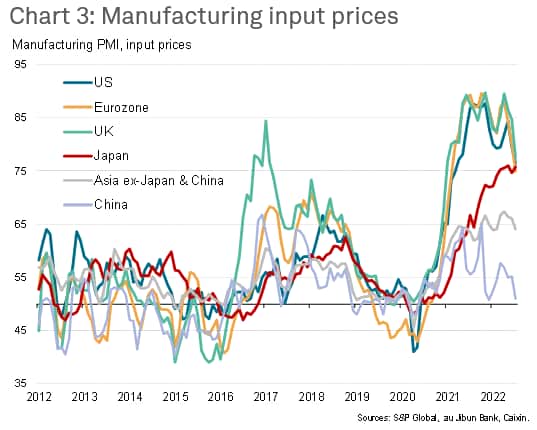 The reduced rate of input cost inflation in part derives from an easing of global supply chain constraints. On average, supplier delivery times continued to lengthen in July though the incidence of delays fell to the lowest since November 2020.

Delays ran highest in the US, but - as witnessed in Europe - have eased markedly since the start of the year. The fewest delays were seen in mainland China, where delivery times have only lengthened marginally in the past two months.

The reduced number of supply delays can in turn be linked to lower demand for raw materials from manufacturers, which has been fueled by a downturn in new orders received by factories. The number of inputs purchased by manufacturers worldwide in fact rose only marginally in July, showing the smallest expansion over the past two-year period of rising purchases. New orders received by manufacturers meanwhile fell in July for the first time since in June 2020, during the initial pandemic lockdowns. 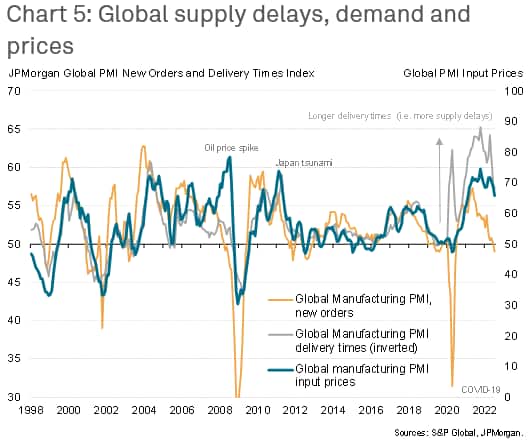 While much of the deterioration in demand reflected weaker final sales to consumers and business customers, demand has also weakened as a result of more companies deliberately winding down their inventory holdings amid reduced worries over near-term supply chain resilience and increased concerns over the economic outlook (see our accompanying note on manufacturing output and demand). The proportion of manufacturers reporting lower inflows of orders due to clients destocking rose to the second-highest on record in July. 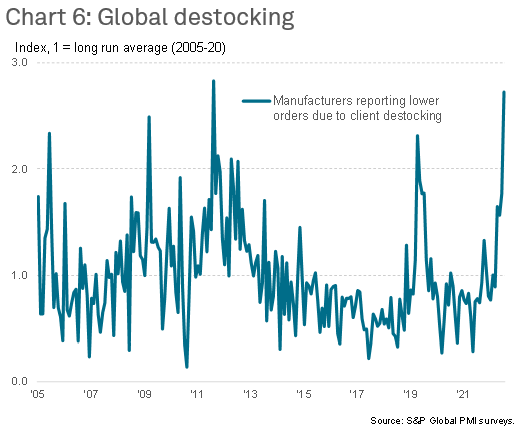 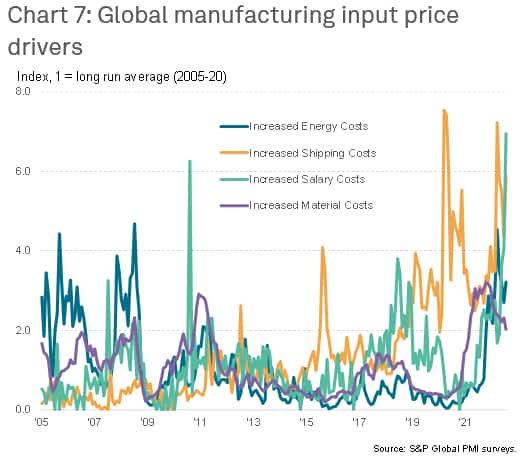 Thus, while input cost pressure has eased in recent months amid an improving supply and demand balance, the rate of inflation remains elevated thanks to increased energy costs, rising shipping costs and an increasingly broad-based uplift in wage pressures.