The JPMorgan Manufacturing Purchasing Managers' Index™ (PMI™), compiled by S&P Global, inched up from 52.3 in April to 52.4 in May, though remained at the second-lowest level recorded over the past 20 months. The subdued performance of the goods-producing sector was led by a slight decline in production for a second successive month, thanks principally to a further marked drop in output in mainland China amid ongoing lockdown measures.

Excluding China, global output rose solidly, helped by another strong US performance. That said, the rate of increase weakened since April, in part due to supply constraints, which in turn exerted further upward pressure on producers' input costs. At the global level, the incidence of supply chain delays and input cost inflation eased compared to April, however, helping to alleviate materials price inflation.

Prospects of improved global manufacturing performance therefore lie to a large degree in the hands of China's authorities and their approach to COVID-19, and signals of looser restrictions bode well for global supply, but in the meantime business optimism has sunk globally to the lowest since July 2020 amid concerns over supply constraints, soaring prices, the energy shock and future demand growth.

In this analysis we look beyond the headline PMI to provide deeper insights into the current health of manufacturing around the world and the outlook for coming months. 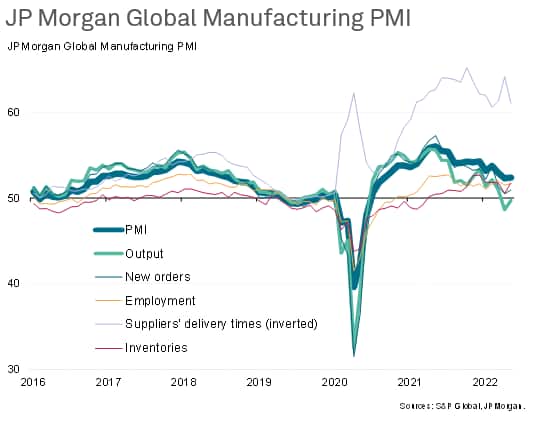 The weakest of the PMI's five components in May was again the Output Index, which edged up from 48.6 in April to 49.7 but remained below the 50.0 no change level to thereby register a second successive monthly fall, albeit only marginal, in worldwide factory production. The second quarter has consequently so far seen the worst global manufacturing performance since the second quarter of 2020, when initial COVID-19 lockdowns had hit worldwide output. 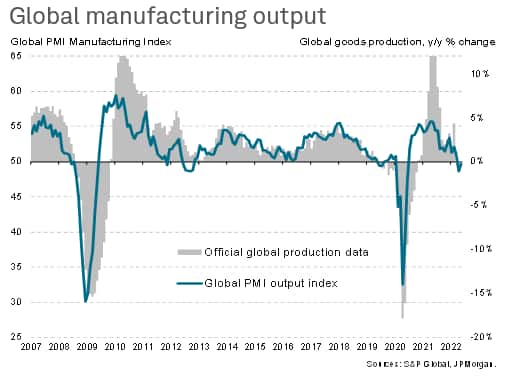 Global trade flows meanwhile deteriorated, with new export orders dropping in May at a rate not seen since July 2020, down for a third straight month.

A key cause of the drop in output was a sharp downturn in factory production within mainland China for a third successive month, exacerbated in Europe by the Ukraine war. Although China's reported output drop in May was less steep than that seen in April, it was still the third-quickest recorded since the height of the global financial crisis, reflecting ongoing efforts by the Chinese authorities to contain the spread of COVID-19. The decline in output seen across China in recent months is notable in being more severe than that seen in the early months of the pandemic by virtue of it being more protracted. 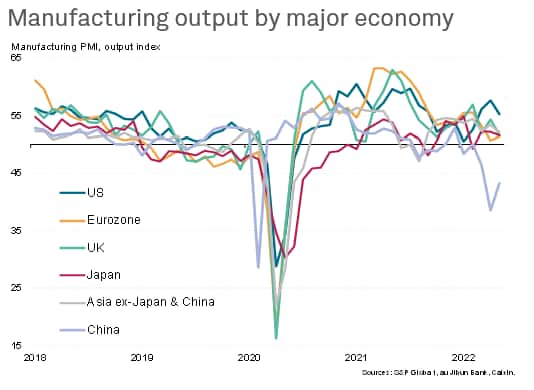 Growth slows outside of China but retains encouraging resilience

Excluding mainland China, global factory output continued to grow in May. The global-excluding-China PMI Output Index reading of 52.7 was in fact only marginally below the pre-pandemic average of 53.0. However, growth outside of China was fueled primarily by the US, with moderating and weak expansions seen in the UK, Japan and the rest of Asia as a whole, and the eurozone continuing to report only sluggish growth. 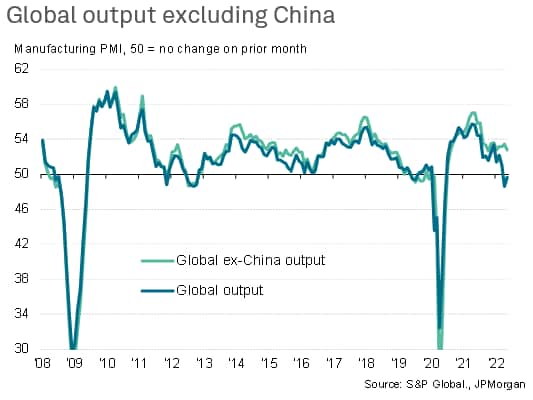 Shortages continue to drive up prices

Further negative news came from the export decline feeding though to a picture of near-stalled overall order books for a second successive month, alongside another month of supplier delivery delays running at levels unprecedented prior to the pandemic. These delivery delays, although less pronounced than in April, fueled another steep rise in worldwide manufacturing raw material prices. The resulting rate of inflation of firms' material costs slowed slightly compared to April, thanks mainly to the recent slowing of demand, but remained among the highest seen over the past decade. 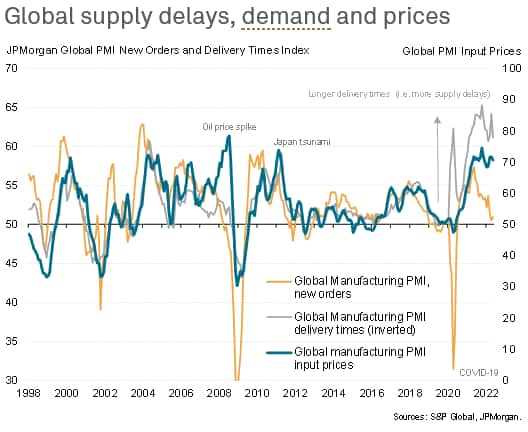 Supply chain delays ease in the US and Europe

The incidence of supplier delays varied by region, however, with an encouraging reduction in the number of reported delays evident in the US and Europe, which have been the worst affected in recent months. Supplier delivery times lengthened at the slowest rate since January 2021 and October 2020 in the US and UK respectively, with the eurozone meanwhile reporting the second-smallest lengthening since the start of 2021. 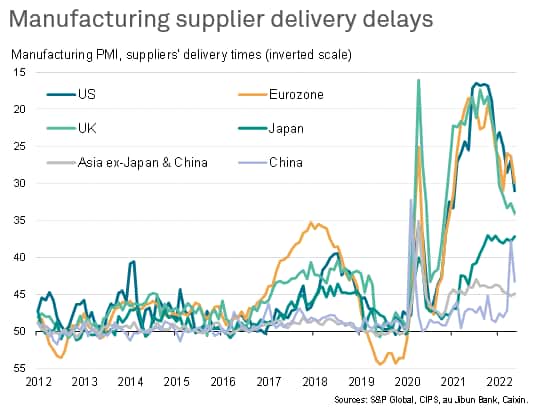 Impact of supply-side constraints on output

The number of manufacturers globally that reported materials shortages to have led to a reduction in production also fell in May, albeit remaining elevated at over four times the long-run average. At the same time, the diminishing impact of the Omicron wave on labour availability was evident, as the number of companies around the world reporting that production had fallen as a result of labour shortages fell to its lowest since July 2021, now running at just over twice the long-run average compared to a factor of almost six at the height of the Omicron wave at the start of the year. 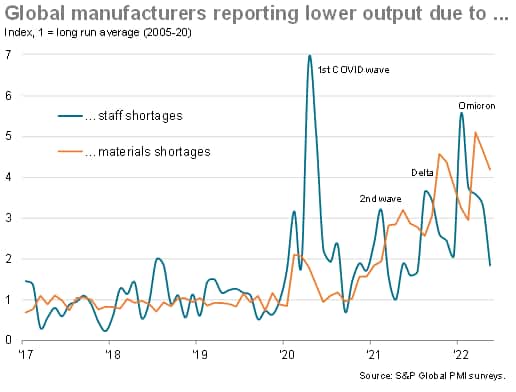 The overall supply chain situation therefore remains one of supply delays continuing to be reported to an extent far exceeding anything previously recorded prior to the pandemic, but with labour supply issues receding and material delays becoming less of an issue, and notably less widespread in the US and Europe compared to the average seen in 2021. These factors should in turn help to alleviate some of the elevated materials price pressures seen in recent months.

Looking ahead, manufacturing optimism fell to its lowest since July 2020, hinting that output growth could slow further in coming months. Companies reported ongoing concern over the global supply and energy situations amid the twin headwinds of the Ukraine war and China's lockdowns, with the associated surge in cost pressures and potential for more aggressive monetary policy tightening adding further downside risks to the outlook. 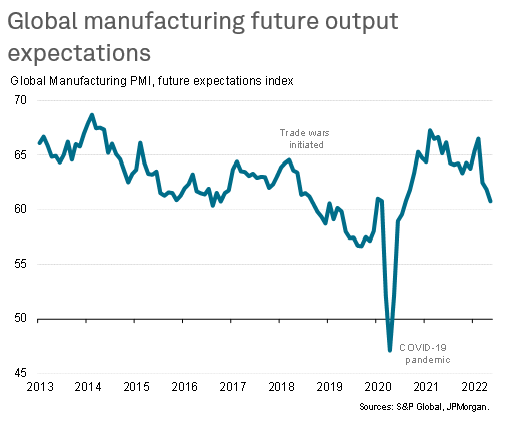 Compared to long-run averages, business confidence is especially weak in the eurozone, reflecting the proximity of the Ukraine war and associated energy shock. Sentiment is also below normal in both China and the rest of Asia excluding Japan, the latter seeing improved optimism in May amid hopes of looser COVID-19 restrictions and export gains arising from a weakened yen. However, optimism in the US has fallen to a level merely in line with the long-run average, hinting that the recent robust US production performance could be on the wane. 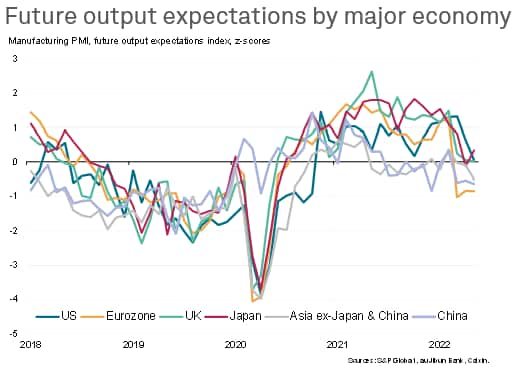 With China reportedly set to ease some of its COVID-19 restrictions in June (announced after the May PMI data were collected), there is a likelihood of further improvements to the global supply situation in the coming months, which could help drive further production gains around the world and also take some of the heat out of prices. However, the flip-side of looser virus restrictions in China on the inflation picture will be reviving demand for many key raw materials, which could fuel another upswing in global commodity prices. 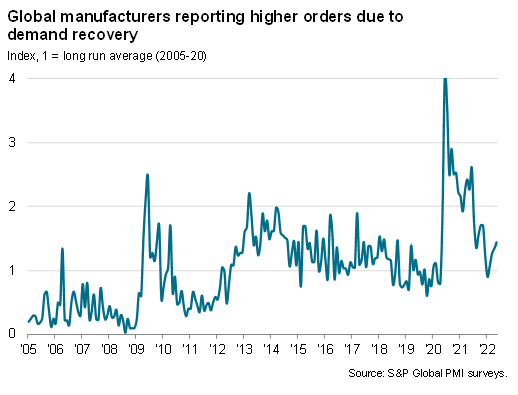 Russia's invasion of Ukraine meanwhile shows no signs of ending soon and is continuing to disrupt supply chains in Europe, notably for food and energy, exerting sustained upward pressure on prices. 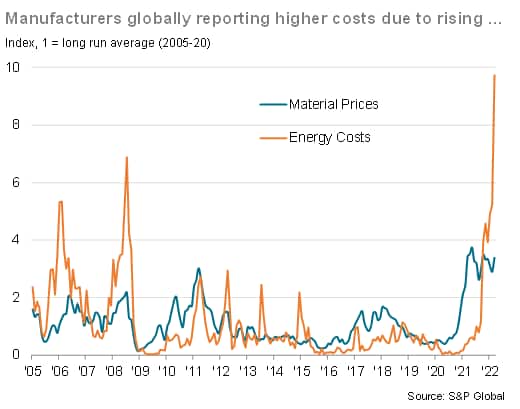 Upcoming data will therefore be important in assessing the interplay of supply and demand on prices, as well as the extent to which the global manufacturing upturn has been undermined by weakened business optimism. The next flash PMI data will be published on 23rd June.