The aerospace industry is highly dependent on the state of the global economy and the global business cycle. It is also very susceptible to non-business-related shocks such as acts of terrorism, military conflicts, environmental disasters for instance volcano eruptions or spread of infectious disease.

Trade within the industry was steadily growing over the long run. Global exports amounted to USD 145.4 billion in 2005 and rose to USD 351.6 billion in 2019. The CAGR over the period 2005-19 for the value of global exports was equal to 6.5%. Global exports contracted twice over the period: in 2009 due to the global financial crisis (by -7.6% year-on-year) and in 2015 - the commodity prices crisis (-0.6% year-on-year). The disruption related to the global financial crisis had a classic V shape, however, the growth rates have never reached the pre-crisis levels. Nonetheless, export growth rates showed an accelerating trade over the period 2015-18. Already 2019 proved to be a sluggish year with global exports of the aerospace industry growing by 4.5% year-on-year in comparison to 6.3% in 2018. A major improvement was expected in 2020 but the prospects for it have been destroyed by the COVID-19 pandemics.

In 2019 global aerospace exports were dominated by turbojets and turbo propellers and their parts (USD 113.2 billion) and other aircraft engines responsible for the next USD 5.5 billion. New aircraft generated USD 101.9 billion in value (most of the exports of aircraft with weights exceeding 15 tons), followed by helicopters (USD 5.8 billion) and spacecraft (USD 2.4 billion). A quarter of exports were related to aircraft parts other than engines with the remainder due to navigational instruments and appliances, radars, and simulators.

The top five exporters in 2019 included France, Germany, the UK, the US, and Singapore (a major re-export hub). Interestingly exports from Hong Kong SAR were greater than exports by China mainland. The top ten also include Canada, Japan, and Spain. 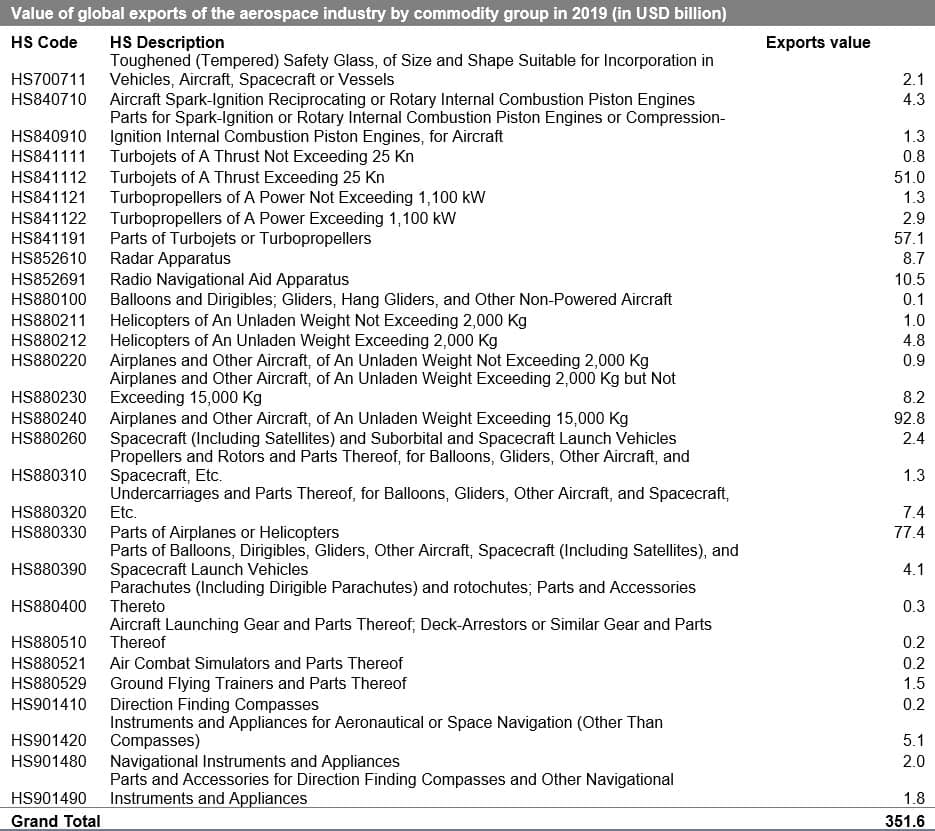 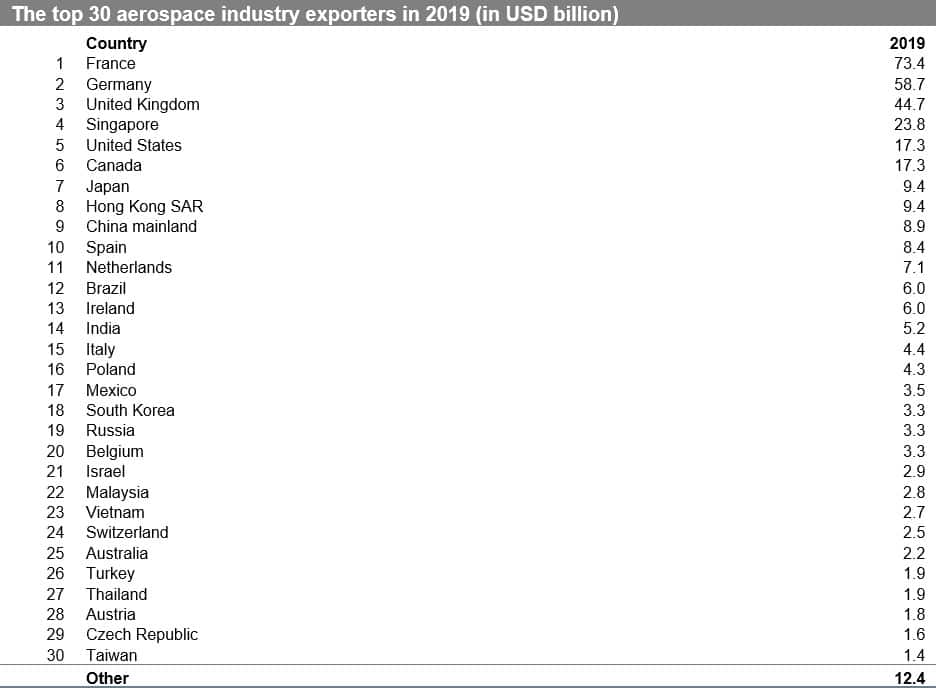 The Q1 2020 financial results reported by IATA show an industry-wide deterioration in profitability following the outbreak of the pandemic. The adverse impact on traffic was widespread across all regions even though some markets were locked down by national authorities relatively later in the first quarter. Overall, in April 2020, air passenger demand posted its largest decline on record (-91%) due to the widespread lockdowns and border closures. Air cargo demand proved to be more resilient but recorded a drop in volumes of 27.7% year-on-year. The passenger load factor declined by 41 ppts year-on-year, while the cargo load factor rose by 11.2 ppts year-on-year as a result of the decline in available capacity due to the grounding of the passenger fleet.

ICAO anticipates 1.2 billion fewer travelers globally by the end of Q3 and revenue fall in the range from USD 160 to 253 billion.

With the easing of lockdown measures, the situation in the industry is likely to improve due to gradually rising demand but still, the year will be the worst on record in terms of volume, traffic, and profitability. The prospects for other waves of the pandemic make the situation even more unpredictable. Boeing expects passenger traffic to recover to pre-COVID-19 levels only in two to three years. This implies decreased demand for new aircraft as idle aircraft is available. The demand for parts could be also lowered. At the same time, resumption of production to pre-COVID-19 levels could take much longer considering the typical aerospace production cycle.

The major aircraft producers worldwide decreased significantly their production capacities e.g. Airbus (in Germany, France, Spain, and the UK), Boeing in the US, Bombardier in plants in Canada, and Northern Ireland, Embraer in Brazil. This also adversely affected engine manufactures such as General Electric in the US or Rolls-Royce in the UK, or helicopters manufacturers such as Textron Inc.

To show the gravity of the current situation we can show the evolution of the industrial production of aerospace products and parts for the United States estimated by the FSB. The value of industrial production in comparison to 2012 went down to 89.3% in Q1 2020 and plummeted to 56.5% in Q2 2020. It is forecasted to reach the value for Q4 2019 only in Q3 2029. Thus a recovery for the US aerospace industry could take a decade. 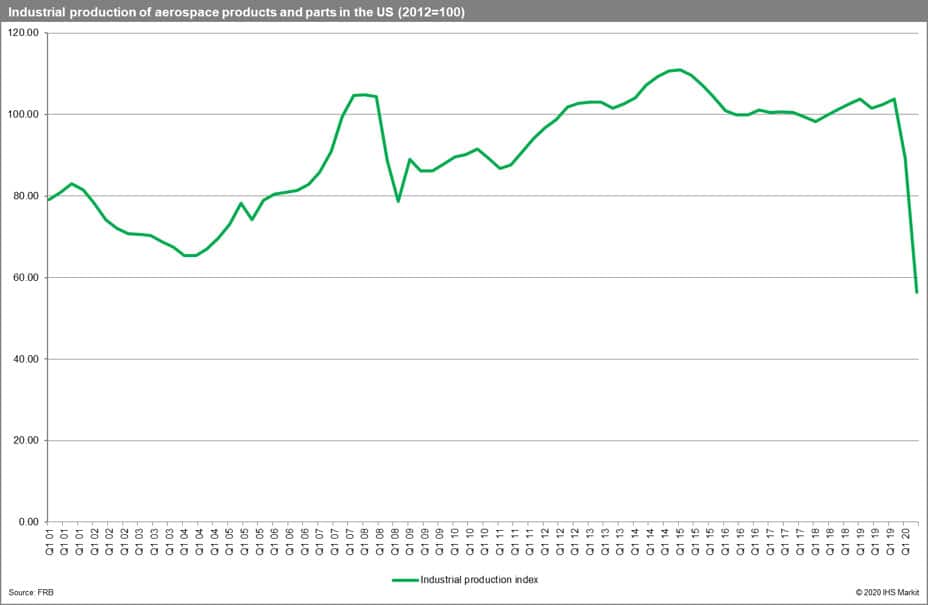 We have furthermore performed the analysis for Q1 2020. To put it into a context we compare the three months of 2020 to the situation in 2019.

The global value of exports was equal to USD 82,408 million in Q1 2019. It went up to USD 97,603 million in Q4 2019. In Q1 2020 it fell to USD 75,854 billion in Q1 2020 which represents a fall of 8.0% year-on-year and a fall of 22.3% in comparison to the preceding quarter. The year-on-year changes by month were equal to -8.9% in January, + 8.5% in February, and -21.0% in March. Knowing the shape of the pandemic curve from the beginning of the year and the actions taken globally and by individual states, we can expect a further deterioration in global exports in Q2 of 2020. A gradual improvement is likely to appear but it could take several years for trade levels to reach levels preceding the COVID-19 pandemic. The aerospace industry has entered the most challenging and unfortunately the most unpredictable phase of its development so far. 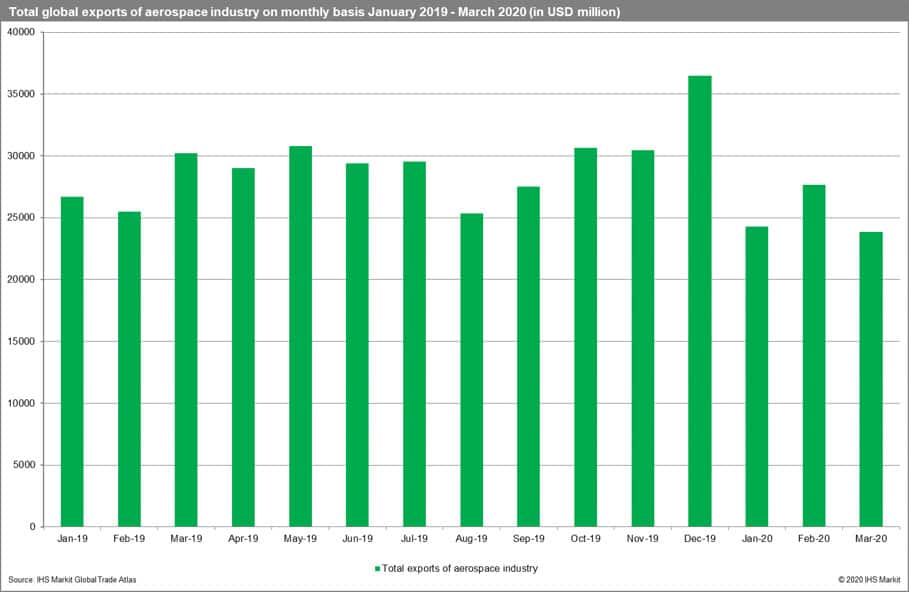 Aerospace manufacturing is considered to be a high-technology industry characterized by a large share of R&D expenses in total sales and extensive global value chains that produces aircraft, guided missiles, various space vehicles, aircraft engines and propulsion units, and related parts both for civilian and military use.

As air transport, both of passengers and cargo has been one of the most adversely affected sectors of global economic activity by the COVID-19 pandemic and taking its significance to the global economy as one of the principal modes of transport it is interesting to analyze the most recent data on global exports of the aerospace industry.

To conduct the analysis, we first mapped aerospace industry products to HS product codes at the 6-digit level of disaggregation which is common to all the states worldwide and then retrieved all the necessary data from the IHS Markit Global Trade Atlas.

This column is based on data from IHS Markit Maritime & Trade Global Trade Atlas.