Worldwide growth accelerated for a third consecutive month in January, according to the latest PMI surveys, registering the strongest monthly increase in output since last March. Other indicators of new orders, capacity usage, jobs growth, global trade and business expectations likewise improved, adding to signs that the global economy was gaining momentum at the start of the year. However, short-term risks to the outlook have risen, especially as the vast majority of the January data were collected prior to the coronavirus outbreak.

Stronger performances were seen across the largest developed world economies, pushing the developed world PMI to a ten-month high. Notable rebounds from fourth quarter weakness were seen in the UK and Japan. Emerging markets nevertheless outperformed the developed world for a sixth straight month, thanks in part to a sharp acceleration of growth in India. China was the only major economy surveyed to see growth wane in January, even before the escalation of the virus outbreak.

The JPMorgan Global PMI™ (compiled by IHS Markit) rose from 51.6 in December to 52.2 in January, marking a further recovery from the low point seen last October, when the PMI had slumped to its lowest since February 2016.

Despite reaching a ten-month high and above the average of 51.6 seen in 2019, the latest reading is still modest by historical standards, comparable with global GDP rising at a modest annual rate of just over 2.5% (at market prices). The rise nevertheless hints at the global slowdown having potentially bottomed-out late last year.

Encouragingly, the upturn was not confined to the global output index. New business inflows also rose at the fastest rate since last March, showing signs of demand growth having now perked up for three straight months. Global export orders fell at the slowest rate for nine months, continuing an easing trend in the global trade downturn that has been evident since the rate of decline peaked last August.

Future output expectations meanwhile hit the highest since last April, linked to reduced recession fears, a moderation of political and economic uncertainty and alleviating trade war worries compared to late last year. Once again we note, however, that the majority of data were collected before the Wuhan virus outbreak.

The global PMI backlogs of work index also rose further from the low seen last September, indicating a reduced rate of excess capacity development, in turn aided by the improvement in new orders growth and boding well for employment. Indeed, the more optimistic outlook and better current order book encouraged more companies to take on extra staff at a rate not seen since last July. 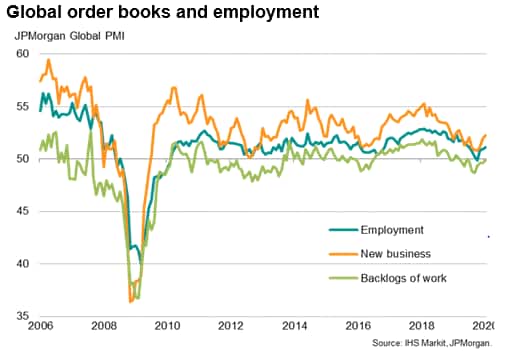 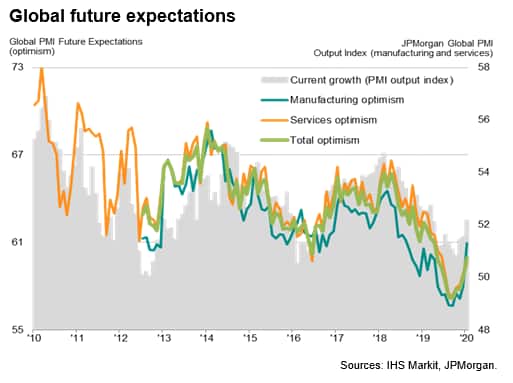 Both manufacturing and services saw better performances in January, with the latter continuing to lead the expansion. Service sector business activity grew at the fastest rate since last April, accelerating for a third straight month with new business showing a similar improving trend. Although recording a weaker rate of expansion than services, manufacturing was notable in recording the fastest new orders growth since December 2018, linked in part to an easing in the rate of decline of global exports.

Both sectors also saw companies become more optimistic about the year ahead. Sentiment in the service sector struck the highest since last June whereas manufacturing confidence was the brightest since August 2018. Similarly, job market indices ticked higher in both sectors, albeit with manufacturing continuing to report net job losses for the eighth time in the past nine months. 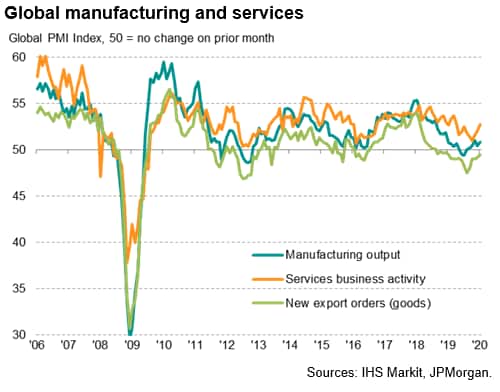 The surveys also revealed a firming of global cost pressures. Average input costs across manufacturing and services rose in January at a rate not seen since last April. However, while average selling prices for goods and services continued to increase, the rate of inflation moderated slightly in a sign of firms being prepared to absorb some of the cost increases in order to keep selling prices low, notably in manufacturing. 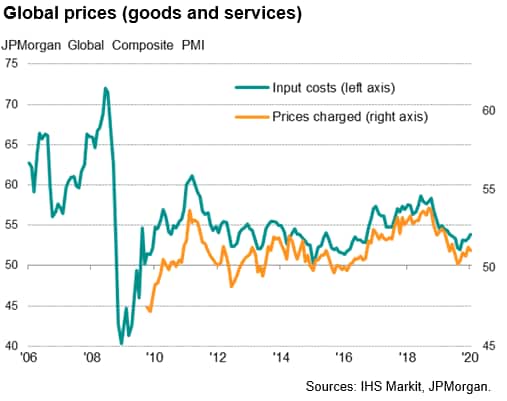 Developed world growth hit the fastest since March of last year, with a broadly stable manufacturing economy accompanied by the largest increase in service sector activity in nine months. Growth accelerated in the US, led by a stronger service sector, to reach the fastest since last March. However, part of the improvement in the developed world could also be accounted for by returns to growth in Japan and the UK after special factors hit business in the fourth quarter of 2019.

A sales tax hike and typhoons had hit business in Japan in the closing months of last year, leading to the sharpest downturn in the economy since 2016. At the same time, political uncertainty and Brexit worries had intensified in the UK in the lead up to the December general election. January saw these bouts of weakness come to an end: Japan recorded a marginal expansion of activity to register growth for the first time in four months, while the UK showed a more robust rebound, with business activity growing at the fastest rate since September 2018 after a decisive election victory by the Conservative party and clearer road-map for Brexit.

Eurozone growth meanwhile also accelerated to round off a full house of improved performances across the 'G4' economies, according to their composite PMIs, the rate of expansion climbing to the fastest since last August, albeit lagging both the US and UK. 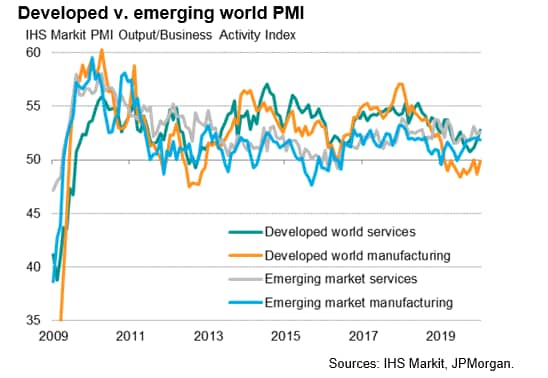 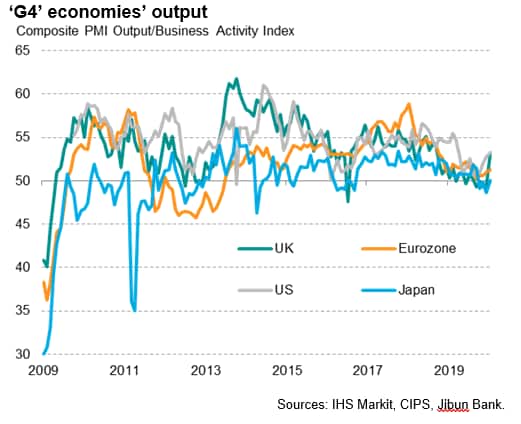 All four major emerging markets meanwhile remained in expansionary territory according to their composite PMIs, led for a second month by India, where business activity rose at a rate not exceeded in almost eight years. Both manufacturing and service sector growth accelerated sharply in India, linked by companies to a marked upturn in domestic demand and easing global trade tensions, likely due at least in part to recent stimulus measures.

Growth also perked up in Brazil and Russia, reaching four- and two-month highs respectively, albeit with both countries seeing manufacturing performances lag behind the service sectors.

China bucked the trend of faster growth seen over the other 'BRIC' emerging markets, reporting a second monthly slowdown in business activity, according to the latest Caixin PMI data, suggesting growth was waning even before the virus struck. 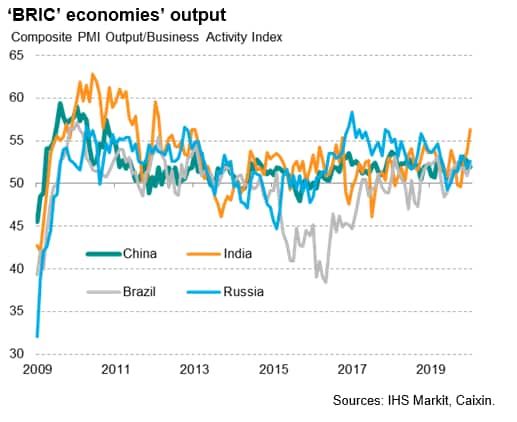