Global economic growth gained momentum at the start of the fourth quarter as disruptions to businesses in many countries eased in line with a reduction in COVID-19 case numbers. While below the rate of expansion seen earlier in the year amid the growth spurt seen as economies opened up from the pandemic, the rate of expansion nevertheless remains above the long-run average to indicate a robust expansion.

Not all economies saw improvements, however, with rising case numbers associated the spread of the Delta variant in the Eurozone and Russia in particular subduing growth, and virus concerns also still limiting growth in other economies, most notably China.

Global economic growth accelerated for a second month running in October. The JPMorgan Global PMI™ (compiled by IHS Markit) rose from 53.3 in September to 54.5 in October, its highest since July. Compared with a pre-pandemic long-run average of 53.6, the latest reading signals above-trend annualised quarterly global GDP growth of approximately 3.5%. 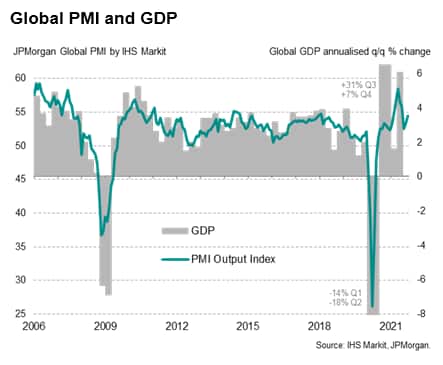 The PMI was boosted by faster service sector growth, which picked up sharply to the highest for three months largely in response to an easing of COVID-19 containment measures in some countries, in turn linked to lower virus case numbers as the Delta wave ebbed.

Having risen in September as governments fought the Delta wave. IHS Markit's COVID-19 Containment Index fell globally in October to the lowest since the pandemic began. It was a different story in manufacturing, however, where ongoing pandemic-related bottlenecks throttled growth to the lowest since the recovery began in July of last year. 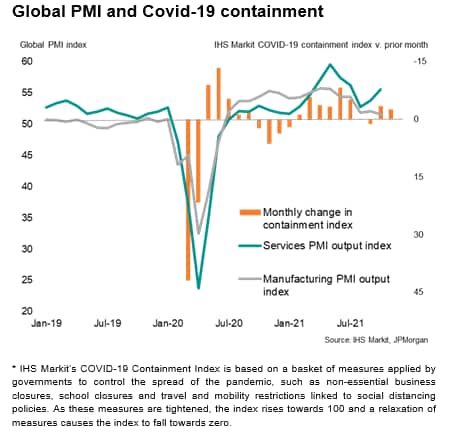 Looking at the major developed markets, output growth gained momentum in the US and UK thanks in both cases to improved service sector performances, which counteracted slower manufacturing growth. Both saw similar strong rates of expansion which hit three-month highs despite manufacturing recoveries waning to the weakest for over a year. Japan also saw an improvement in its performance, with business activity returning to growth for the first time since April as output revived from recent COVID-19 related disruptions in both manufacturing and services.

The eurozone bucked the improving trend, with growth slowing in both manufacturing and services during October to result in the weakest overall expansion since April. Supply constraints limited growth in both sectors, exacerbated by a renewed rise in virus case numbers in some parts of the region, notably Germany. 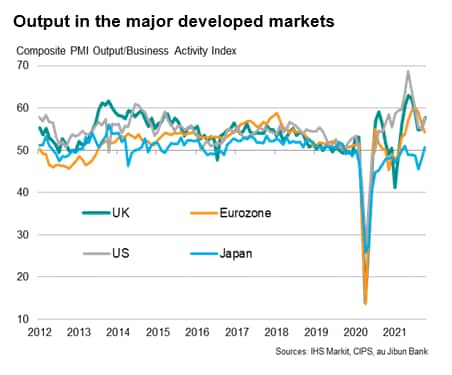 India led the major emerging markets during October, which as a whole recorded the strongest growth since May. Buoyed by activity recovering from lockdown measures, India reported the fastest manufacturing growth since March and the steepest service sector expansion since April 2011.

In contrast, Russia - facing new lockdown precautions to fight rising COVID-19 case numbers - saw service sector activity contract at a rate not seen since last December, offsetting a modest manufacturing upturn to result in an overall deterioration of business activity for the second time in the past three months.

China and Brazil meanwhile saw some pick-up in service sector activity, but in both bases manufacturing output fell, dropping for the third month running in China and declining for the first time in six months in Brazil, linked principally to COVID-19 related bottlenecks. 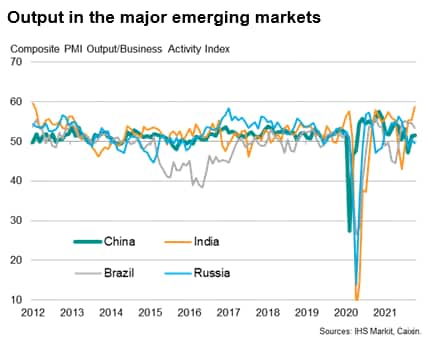