While the June PMI surveys indicate ongoing growth of business activity at the end of the second quarter, a sharp deterioration in the rate of growth raises the risk of the region slipping into economic decline in the third quarter. Forward-looking indicators have fallen to levels consistent with declining GDP given the current policy path signalled by the ECB. More encouragingly, inflationary pressures are showing signs of having peaked.

The seasonally adjusted S&P Global Eurozone PMI® Composite Output Index registered 52.0 in June. Although still indicative of a modest upturn in private sector output, the latest reading was down from 54.8 in May, signalling the slowest rate of expansion in the current 16-month recovery period.

The June PMI reading is indicative of quarterly GDP growth moderating to just 0.2%, down from 0.6% at the end of the first quarter (see chart 1). 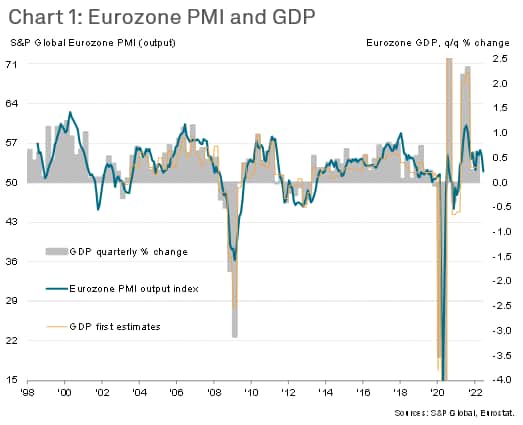 Worse looks set to come, with forward-looking indicators such as the survey's new orders and business expectations gauges pointing to falling output in coming months.

Inflows of new work to eurozone companies stagnated in June, ending a 15-month sequence of growth. Weakness was principally in the manufacturing sector, where order book volumes declined sharply, although services firms reported a significant weakening of demand growth. Household spending on non-essential goods and services has come under particular pressure due to soaring prices but business spending and investment is also waning in response to the gloomier outlook and tightening financial conditions. Demand, as measured by new order inflows, is in fact now lagging behind output growth (see chart 2), pointing to the build-up of excess operating capacity. 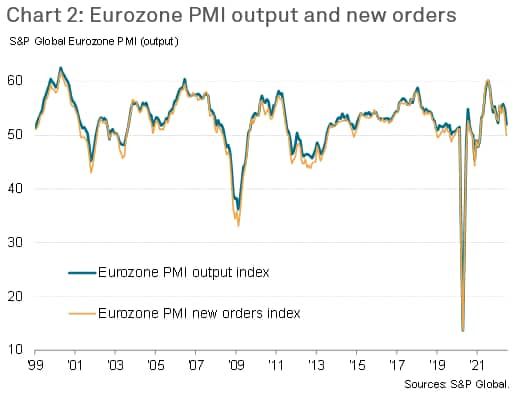 The excess of output relative to demand is substantial by historical standards and, as shown by chart 3, and suggests - absent a revival in demand - there is a strong likelihood of GDP contracting in the coming months as firms adjust capacity lower, in line with the recent slowing of demand growth. 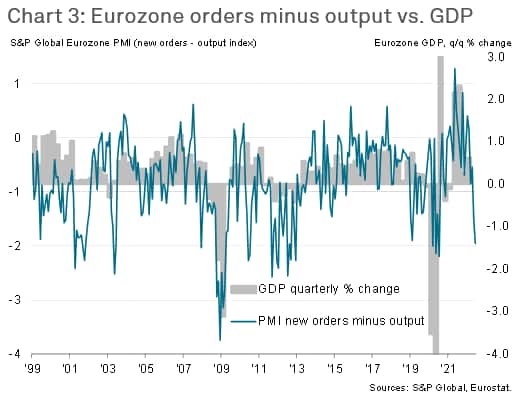 June also saw a further moderation of business confidence amongst eurozone firms. The level of sentiment across manufacturing and services was the weakest since October 2020 and subdued in the context of historical data, with firms concerned around the economic outlook and inflationary pressures. The deterioration in the PMI's future expectations index also took the gauge into territory indicative of output falling in the coming months (see chart 4). 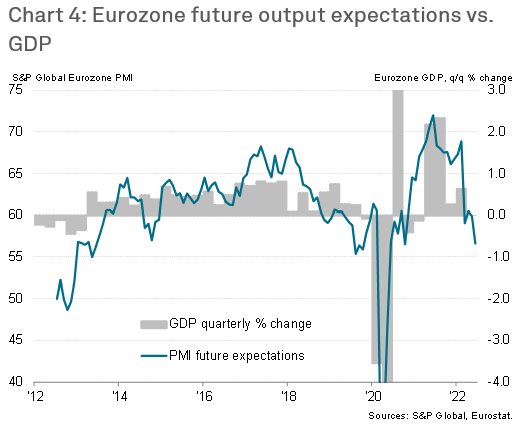 By the same token, the survey data also suggests that the recent robust hiring trend signalled by the PMI survey in June will also soon start to deteriorate, which will serve to cool the labour market. 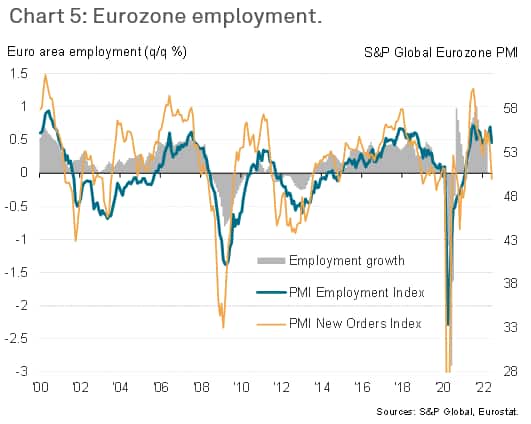 The assertions that the current signals from the new orders/output comparison and future expectations index are consistent with economic downturns need to be qualified by the observation that these gauges have in the past fallen below current levels without triggering an imminent GDP decline (e.g. 2001, 2004, 2014-15). However, it should be noted that prior periods of weakness in these indicators were accompanied by policy easing by the ECB (see chart 6), whereas the current guidance from the ECB is for an imminent series of rate hikes, which has already led to tighter financial conditions. 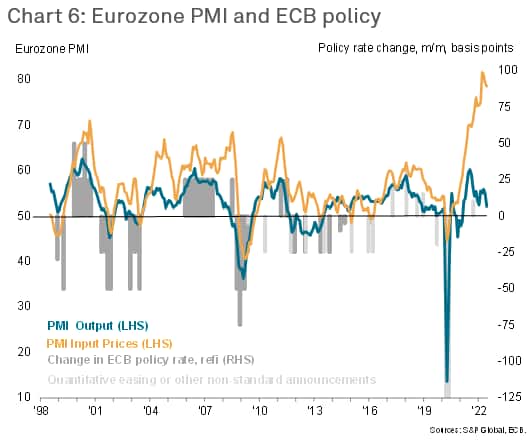 More encouragingly, as chart 6 illustrates, although price pressures remain elevated, there are signs that inflationary forces peaked back in April, reflecting a marked cooling of industrial price growth, improving supply chains and diminished demand. However, energy and food supply will likely remain two particular areas of concern and potential inflationary pressures as long as the war in Ukraine continues.

The latest PMI data therefore suggest that risks have increasingly tilted towards the economy slipping into a downturn at the same time that inflationary pressures moderate but remain elevated.

The full press release is available by clicking here.