However, a commonality the three share is their focus on long-term equilibrium estimation. This means these models are often ignorant of short-term shifts in fundamentals which can affect exchange rate valuations and suggest currencies are out of sync with current financial and economic fundamentals.

While this does make modelling in the short-term easier to criticise, it also creates a compelling reason why short-term equilibrium estimation can be a useful benchmark to measure these movements against. Short-term fluctuations can have important implications for businesses who trade goods and services across borders, tactical asset allocation decisions for international investors bearing currency risk, as well as policymakers in countries where the domestic economy has a high degree of sensitivity to changes in the exchange rate, such as those in emerging markets.

While changes in the financial landscape can be easily monitored in real time given the rich availability of financial markets data, monitoring momentum shifts in the economic environment as they happen are more difficult given the lack of equally-as-timely macroeconomic data.

This doesn't mean this important area should be neglected, and we find that PMI data play a statistically significant role in capturing changes in the economic fundamentals that can affect short-term exchange rate valuations.

We introduce our short-term equilibrium exchange rate model, which provides estimates of a currency pair's "fair value", based on the short-term changes in economic and financial market fundamentals in one country, relative to another.

Many existing short-term FX valuation models tend to lean more on financial market data because its timeliness makes capturing fundamental changes in the investment environment between two countries a simpler task. This means that potentially valuable signals from economic data tend to be excluded from equilibrium estimations.

The ideal candidate for measuring short-term economic changes in one country relative to another would need to be reflective of the broad macroeconomy, be timely and be comparable between the two countries in question. Given PMI data satisfy these three criteria, we input them into our model as a way of capturing relative economic momentum shifts. PMI data is also unrevised and less volatile than comparable official data series, making it especially useful in this scenario.

As briefly touched on above, we are estimating the "fair value" of a currency pair, so we need to look at the economic and financial market fundamentals of one country (the base currency) relative to the other (counter/quote currency), as there are forces on either side affecting the rate of exchange.

For example, if we are computing a short-term "fair value" estimate of EUR/USD (as in our case study), all our variables will be for the eurozone, relative to the US.

We apply ordinary least squares to the following theoretical framework:

To measure short-term changes in economic fundamentals in one country relative to another, we look at cross-country differences in PMIs. The comparability of PMIs across countries, their proven record of capturing broad and underlying macroeconomic trends, and their timeliness makes them highly appealing for an exercise such as this.

We use two variables to capture economic fundamentals - Manufacturing Output and Manufacturing Input Price PMIs - as changes in growth and inflation will have the strongest impact on rates of return, which are a key driver of the value of an exchange rate in the short-term. Also, the manufacturing sector tends to display more cyclicality than other parts of the economy in the short-run, and provides greater exposure to changes in international trade, which are likely to alter exchange rate valuations. 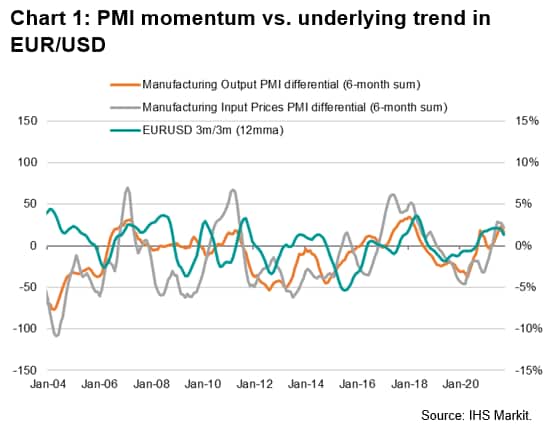 The intuition behind this is as follows: a sustained period of faster growth will likely encourage inflows into the respective currency as investors capitalise on the greater rates of return available in the short run, therefore shifting the currency into a new short-term equilibrium. However, sustained periods of strong growth will tend to stoke inflationary pressures, which are likely to put pressure on short-term interest rates, which will also attract foreign investors. Overlaying EUR/USD on our output and inflation momentum series show clear instances where the currency pair is reacting to changes in these short-term economic fundamentals.

We focus on equity and sovereign bond market fundamentals in determining our short-term equilibrium in EUR/USD. For equities, relative performance in equity markets is captured with a variable we create by comparing total returns of the STOXX Europe 600 against total returns of the S&P 500 over the past six months. For sovereign bond market fundamentals, we take yield spreads between 10-year German Bunds and 10-year US Treasuries.

As a caveat, this is not an exhaustive list of financial market variables to find short-term "fair value" and we urge those who wish to experiment to test with other variables they deem appropriate.

For EUR/USD, we also added 10-year Italian BTP yields to proxy for the effects quantitative easing has had on the EUR since 2014. 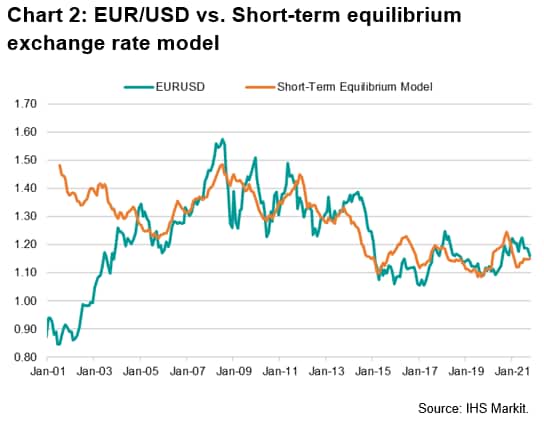 The results of our estimation are shown on chart 2 above and are compared against the EUR/USD exchange rate.

Our findings suggest that over the sample period (January 2004 - September 2021), independent variables in our short-term equilibrium model explain approximately 70% of the variation in EUR/USD. This means that since 2004, EUR/USD is well correlated with its short-term equilibrium. We also find that our PMI-based explanatory variables are statistically significant at the 1% threshold, and the inclusion of these improves the adjusted R-squared by around 6 percentage points, suggesting PMIs do a good job at capturing the economic drivers of EUR/USD.

The model also identifies periods in which EUR/USD is either over- or under-valued, according to its economic and financial market fundamentals (see chart 3). Considerable under-valuation was seen leading up to 2004, and to a lesser degree in 2009 and between 2015 and 2017. Likewise, the chart highlights periods of overvaluation, such as in 2007 to 2008, parts of 2009 and for a large part between 2013 and 2014. Monitoring these developments can therefore provide fruitful opportunities for businesses, international investors and policymakers to identify periods of above-average misvaluation and adjust accordingly. 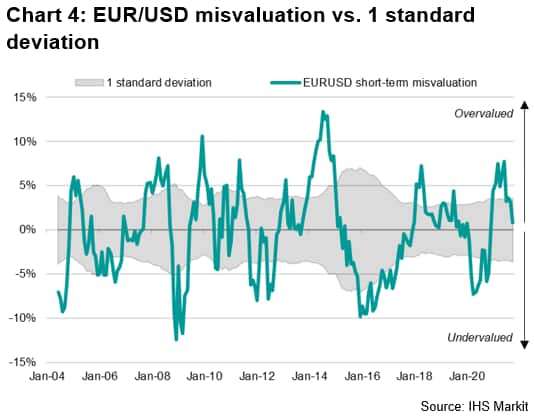 At the time of writing, EUR/USD is trading close to 1.16, which compares to our current short-term fair value estimate of 1.15. The short-term equilibrium model has valued EUR/USD at around the 1.15 mark since June, when EUR/USD was trading as high as 1.22.

We introduce a method for enhancing short-term equilibrium exchange rate estimation by adding in PMI-based variables to capture shifts in economic fundamentals between countries.

The PMI's ability to capture broad underlying macroeconomic trends, its timeliness, and comparability between countries makes it an ideal candidate to measure relative changes in economic conditions.

1 We also applied linear time-decay to the differences, giving the latest observation a higher weight than the sixth, but found this did not cause any material difference in equilibrium estimates. Other analysts may wish to experiment with different weighting techniques